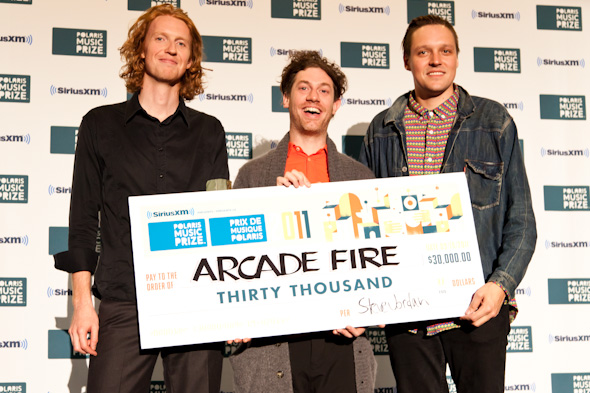 Though it’s been awarded annually since 2006, it’s amazing how many people still don’t know about the Polaris Music Prize. Like the Mercury in England, the cash prize ($30K in our case) is given to the Canadian band that released the best record of the year, according to a jury of over 200 members of the Canadian media (myself included). Each of the short-listed runners-up gets a $2K consolation prize. This is largely made possible with government funding. Record sales are not a factor, and bands don’t pay to be nominated.

Here’s how it works: Each jurist picks their favourite five Canadian albums of the previous year, and the top 40 picks make up the long list. Then we vote on the nominees to bring the list down to 10. Finally, 11 members of the jury are flown to Toronto to deliberate and select a winner ahead of the awards gala, which is broadcast live online.

On June 19, the long list was announced in Calgary by Polaris founder and executive director Steve Jordan. Aiding in the announcement was Calgary Mayor Naheed Nenshi and musicians Dan Boeckner and Basia Bulat, the latter a nominee who was on hand to play a song for the crowd assembled at the National Music Centre.

The long list announcement used to happen in Toronto during the NXNE music fest but started moving around the country three years ago, arriving at SAT in Montreal last year. Polaris came to Calgary and its Sled Island music fest to be part of the city and the festival’s comeback after last year’s devastating flood. But since 2009, Polaris has had visibility across Canada every summer and fall with its Polaris salons: panels of local jurists discussing the year in Canadian music in small public venues. The upcoming Montreal date is TBA.

Polaris’s detractors have protested past wins of such successful acts as Arcade Fire and Feist, but as someone says every year around Polaris time, the prize is awarded based on musical merit alone. Not that there’s much unanimity in the jury—some jurists haven’t been shy about publicly criticizing the group’s choices, and the final deliberation has reportedly seen some very heated conversations. (Not to mention the arguments that erupt in group email exchanges year round.)

As for this year’s long list, the short list to come (on July 15) and the eventual winner (on Sept. 22), 2014’s crop of artists will likely be as controversial as ever. For now, Jordan couldn’t possibly comment.

“I’m a publicly neutral observer,” he says, “but I have my private views. The most heartbreaking part of the job is when I’m going through the ballots and I see things that come up on the long list that push other things off the list. Every year, there’s something where I’m like, ‘Guys, really? How did that not get on there?’

“But having a long list that is too short for all the great music that comes out of this country is a good problem to have.”