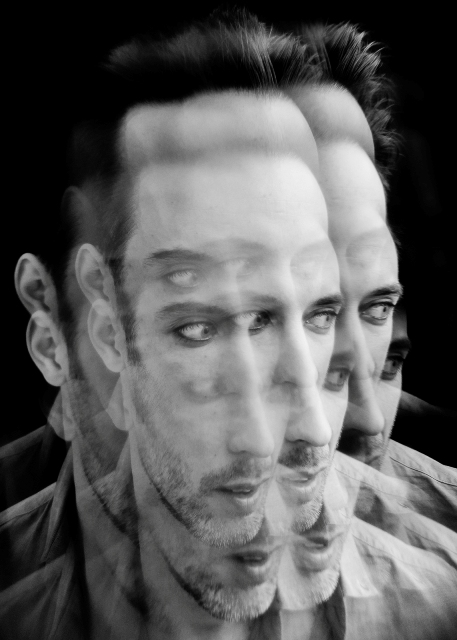 After playing in a pair of landmark local bands — co-leading Wolf Parade with Spencer Krug (now of Moonface) from 2003 to 2011, and fronting Handsome Furs, a duo with his now ex-wife Alexei Perry, from 2006 to 2012 — Dan Boeckner returned to the West Coast. Not to his native Victoria, B.C., but to California, the homebase of the band he now co-leads with Britt Daniel of Spoon: Divine Fits.

That band established itself with a great album (A Thing Called Divine Fits) and world tour in 2012 and 2013, then became dormant as Spoon swung back into action. That gave Boeckner enough downtime to get restless, and so we have another band, Operators, a trio with Divine Fits drummer Sam Brown and multi-instrumentalist Devojka.

Operators play their first Montreal show this Sunday, May 11. Earlier this week I called Boeckner in Operators’ east/middle-America HQ (Brown’s digs in Columbus, OH) to talk about the band’s sound, their forthcoming album (recorded in Mile End) and the Montrealers he misses, and those he credits for enabling his music career.

Dan Boeckner: It’s a great town, kinda underrated. It’s close to everything: It’s the gateway to the South but it’s three hours from Chicago, and seven hours from Toronto. There’s a great university here, and there’s a little bit of post-rustbelt economic decline so everything’s cheap. The rent is literally half what I pay in California, if not less.

LC: So who is Devojka?

DB: She’s Eastern European, from Macedonia. She has her own solo project and has played in the U.S. and in Macedonia. I met her on tour. She’s just a perfect fit for this band. She can do it all: She can write guitar parts and play keyboards and program sequences and work with synths.

A three-piece is one of the most flexible line-ups. There’s always a tie-breaker if you’re making a decision, any kind of decision: Should we stop at this gas station? Should we cut this bridge out of this song? Does this keyboard part sound okay?

LC: From what I’ve heard and read about Operators, it seems to be a coming together of the rock and electronic sounds you’ve been working between for the last decade.

DB: When we first started writing songs for this band, they were pretty frantic, maybe a little more punked out — not so much in arrangement but in the spirit of how they were performed. I realized when we finished this record that the one constant through my career has been drum machines and synths, even if that sounds weird. People think of Wolf Parade as a straight-up four-piece rock band, but Apologies and all that early stuff, especially the early performances, was all analogue synths, a crappy Casio drum machine, Arlen playing drums along with that, and guitar and no bass. I’ve always worked with synthesizers, into Handsome Furs and the  Divine Fits, too.

This project has been really good for me. It feels like a culmination of the stuff I was working on in Wolf Parade and also Handsome Furs — a kind of refinement of those textures and sounds. But it’s its own beast: it’s sci-fi dance-punk music.

LC: So what can you tell me about the album?

DB: We actually recorded it in Montreal in February, with Howard Bilerman at Hotel 2 Tango. It was a no-brainer. I hadn’t been back to Montreal in a long time, with the exception of playing that Divine Fits show, and I realized there’s just this amazing community that I really missed, like Jonathan Cummins and Nick Robinson, all those guys, people who were around in what I would consider the formative years of my life. But instead of feeling sad or depressed about that, it just recharged me. We ended up recording way more material than I thought we would — we walked out of there with enough material for an EP and an album. A lot of songs got written while we were up there. It was a nonstop writing session.

I remembered how great it was to record an album in the dead of winter when there’s nothing else to do but just buckle down and write. Everybody was talking about what a shitty winter it was, too. I got to go home to California and recharged my batteries in March, and when I went back to Montreal in April to do the overdubs and start mixing, it was only slightly less shitty than it had been in February — just apocalyptically bad.

One of my favourite moments of recording was walking by Olimpico with the band, and it was the first day when it was over 5 degrees and everybody was outside standing around in shirtsleeves. It was way too cold to be doing that but people were so excited that it wasn’t subzero, so they were just gonna pretend like it’s summer. I love that. I really miss it.

LC: You’re making your live debut in Montreal with this band at Il Motore, which is where you played the first local show with Divine Fits. Is that a coincidence or do you really dig that venue?

DB: I really like Brian and Meyer from Blue Skies [Turn Black]. I worked with them pretty much exclusively the entire time I was living in Montreal, them and Mauro and the other guys at Casa and Sala. I really have them to thank for the fact that I play music for a living now. They were a key part of that foundation, ’cause growing up in Victoria — and I know from a lot of my friends that it’s the same in Vancouver — you don’t get promotion companies that are blindly supportive of new projects. Blue Skies and the guys at Casa and Sala have really enabled a lot of bands to perform, get paid for it, get exposure. Even Arcade Fire, and the successive generations after that, the loft scene with Doldrums and Majical Cloudz and all these great new bands coming out of the city. A lot of people don’t remember how messed up the situation was for this type of music that was incubated in the city pre-2001. When Casa and Sala started having indie rock shows, it really changed the landscape, and Il Motore and Blue Skies are part of that axis, so I feel very loyal to them.

LC: Yeah, I don’t think they get enough credit for what happened with the music scene here. So when will the record come out?

DB: I dunno, I imagine late summer or early fall. It’s the first time I’ve put together a record and shopped it around to labels after it was done. I’ve always been under contract with either Sub Pop or Merge. But we were just like, “Well, we’ve got enough money to make this record, we wanna work with Howard, we’re just gonna make it and whoever’s most interested and whatever’s the best fit for this music…” It’s a luxury, right? Most bands have to put a demo out, sign to a label and make the capital in advance to make the record. I feel lucky that we got to put the band together, focus its aesthetic and make an album without being beholden to a label right off the bat.

So it’ll come out this year and then we’ll tour, but I really wanted to do these shows in Toronto and Montreal because instead of putting stuff up on the Internet, or a trailer for the band, or a long lead-up, I want people to come and see the music in a live environment first. I want that to be the introduction. ■