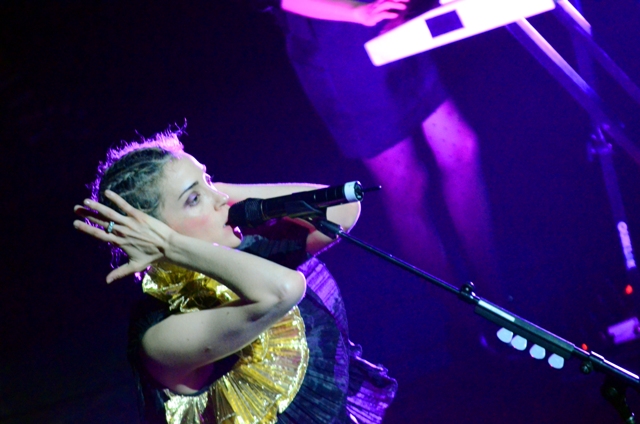 “Nobody rains on our parade” was the tagline for the eighth edition of Sled Island, the scrappy indie-music festival that takes over Calgary’s bars, concert halls and makeshift venues for the better part of seven days in June. Last year, a flood that devastated homes and businesses across the city forced festival organizers to cancel a lot of shows, and deal with stranded artists, attendees and reporters. Luckily, when Sled Island offered refunds to those who’d bought passes, most of those offers were turned down. And so the festival was able to return this year, determined to stage a mighty comeback.

Sled Island is four years younger than Pop Montreal, and with its eclectic programming and focus on emerging talent, and its use of churches, seniors’ clubs, open-air stages and riverside space, it’s very reminiscent of our Pop. And guess what? The festival’s director is former Montrealer Shawn Petsche, who was once the head of Pop’s visual art component, Art Pop.

As with any music festival these days, there were a lot of Montreal acts playing Sled Island, from hip hop DJ/producers like Tommy Kruise to punks like Solids to indie bands like Maica Mia to arty acts like Jerusalem in My Heart.

After the Wednesday night opening party in the artist lounge, located at the top of the Calgary Tower (a giant cupcake on a stick that’s actually a little older than Toronto’s CN Tower), I linked up with NYC-based Australian publicist Grace Jones and an assortment of international reporters and photographers. We went to see Rhye play to pews full of swooning fans in a red-lit church dominated by a giant pipe organ. Rhye is that L.A. act that makes delectably smooth pop music in the key of Sade, fronted by a man with a beautiful, incredibly feminine voice. It was sweet to start the festival with such a sonically and aesthetically lovely set.

Next up was a band called Burnt Shrines in the basement of the Commonwealth, a 100-capacity joint so swank that they charge $6.75 for a small can of Pabst. The band had an angular post-punk edge that felt a little dangerous, an interesting, obscure find and a nice contrast to Rhye and the acts to come.

Next we checked out Mr. Radwan Ghazi Moumneh, aka Jerusalem in My Heart, but were disappointed to find that A) the venue was an alcohol-free space that felt like a library (the National Music Centre, which is being rebuilt in opulent grandeur in another part of town, set to open in 2016) and B) we arrived just five minutes before the end of his set.

Then I talked everyone into hitting up Republik (Montreal comparison: Cabaret du Mile End) to see Dan Boeckner’s latest band, Operators — with a track record like Wolf Parade, Handsome Furs and Divine Fits, Boeckner is reliably amazing. His multi-instrumentalist/lady-friend Devojka had clearly loosened up over the six shows they’d played to date — she didn’t really make a peep when they played their third show at Il Motore in May, but this time she did most of the talking for the band.

On Thursday, I linked up with (roughly) the same gang at the Polaris Music Prize long list announcement, then headed to 17th Avenue — it’s somewhat comparable to St-Laurent Blvd., with its concentration of restaurants, bars and boutiques, but it’s a lot smaller and less eclectic. Our destination was one of the grittier spots on the strip, Sloth Records, where bands were performing amid the vinyl bins in the afternoon. We saw Edmonton’s Slates, a cool punk/post-punk band who played a short set that, the singer admitted, was “padded with covers” (of Hüsker Dü and obscure early Joy Division).

Later we hit the East Village RiverWalk Plaza block party in time to catch a set by Montreal DJ Jacques Greene. It had finally stopped raining for the first time since I’d arrived, and the open-air dancefloor filled with colourful teens and 20-somethings, assorted patchouli-scented hippies who were clearly tripping balls and assorted older folks standing back in the muddy bar area sipping beer. I joined the kids for a good 20 minutes to get my dance on, then left the scene with a pair of Toronto journalists to see Portland garage revivalists the Shivas at the Golden Age Club, an actual seniors’ club with bingo lights and no A/C.

The Shivas are a young band with a couple of singles on K Records, and their sound was tightly packed with echoes of vintage garage, à la Brian Jonestown Massacre. If someone told me that every single one of their songs was a cover of a classic ’60s tune that’s tucked somewhere in my subconscious, I would believe it.

Sled Island hit a major snag the next night: arguably the biggest act on the bill, Neko Case, cancelled her set just a few hours prior to showtime, with no explanation. (Guest curator Kathleen Hanna had also cancelled due to illness, but that happened back in May.) Joel Plaskett, who was booked to play another show that night, took Case’s headlining spot at the open-air Olympic Plaza, with Bry Webb and Blitzen Trapper opening, but the early sets were marred by a heavy rainfall that turned to hail.

I chose to go off the Sled grid that night and hang out at Broken City, the premiere alt showbar in town. Hip hop DJs were playing on a rooftop terrasse (à la Tokyo Bar’s June bangers) and a bunch of young punks were hanging around in the pub downstairs, including one guy who’d recently summered in Montreal on the squeegee tip, sleeping under the stars, partying at Tam-Tams and attending ragers at the Fattal lofts. He had a different take on the Calgary boom than what I’d been hearing elsewhere on this trip (gentrification = the closure of bars and venues akin to Broken City), as did a young bartender at Calgary’s only gay nightclub up the street (Twisted Element), where I went to drink and watch a Classic Queens drag show (which was better than Mado, incidentally). This guy told me all about the way landlords had taken advantage of the previous year’s flood by jacking up rents and evicting tenants who couldn’t afford them to accommodate desperate but more monied people whose dwellings had been wrecked in the disaster.

That along with the increasing scarcity of jobs (possibly due to the influx of 50,000 new Calgarians a year) and soaring property taxes suggest that the boom everyone’s talking about is not benefitting everyone, like the sketchy characters I saw on my long walk home that night, assembled outside of Mac’s (what the ROC calls Couche-Tard), covered in bruises and knife scars, crack pipes in hand. None of these people were white, but a girl I saw the next day, an anxious, ragged-looking drug-addicted prostitute straight out of Vancouver’s infamous Downtown Eastside, was as white as a sheet. She really stood out on 17th, gleaming in the sun alongside her pimp as my group passed by on a tour of fancy restaurants and food shops, courtesy of Calgary Tourism. Of course you’ll see this kind of juxtaposition in every city, but Calgary’s considerable underbelly seems better hidden than most, aside from the sirens I heard from my hotel room every night.

A NOTE ABOUT FOOD

The tour showed off Calgary’s pizza, cheese, churros, cocktails and kale, focusing on everything but the well-known Alberta beef, though we’d been treated to a pile of BBQ the previous day (or mac ‘n’ cheese for the vegetarians) at a smokehouse that doubled as a music venue: Palomino’s. But it’s very tough to find cheap eats. It felt miraculous when I stumbled upon a Thai restaurant that sold subs for $5.50. Calgary also has a similar food truck system to ours: 40 trucks that sell pricey goods, though the general trend is toward comfort food, unlike some of the ritzy stuff we have here. Perogies cost $1 a pop.

BEST OF THE FEST

Back on the Sled Island tip, the trip’s one and only sunny day (Saturday) seemed like a great time to hit Olympic Plaza, where White Lung, Rocket From the Crypt and Spiritualized played from 4:30 through sunset at 10 p.m. — Calgary’s longest day is a little longer than ours. Classic U.K. rock band Spiritualized sounded great, playing a range of swelling psych ballads and raucous jams that moved one couple in the audience to slow-dance, and a gang of friends to link up and sway together. The band’s frontman/mastermind Jason Pearce (aka J Spaceman) was seated for the entire show, perhaps due to lingering effects of a major health crisis that nearly killed him a few years ago. He’s still floating in space, but thankfully not literally.

Then it was on to the best show of the fest, which took place in the cheesiest venue: Flames Central. Yes, the Calgary Flames, though this wasn’t the arena where the team plays (that’s the Saddledome), but an affiliated 1,500-capacity venue where large square and scrolling screens light up the room with ads for upcoming shows, pizza being sold somewhere in the complex, and cigarettes. It was gross, and apparently St. Vincent thought so too, delaying her set until all the shit was turned off (it had been on all through the opening act, Edmonton’s Doug Hoyer).

What a fine way to wrap Sled Island: St. Vincent was fucking amazing. She has corn rows now, making her look a little severe (or severely pretty). It’s hard to fathom that she seems to rub some people the wrong way, like the douchebags who complained to NBC about her recent SNL appearance, or the guy behind me (who presumably paid to get into this show), who reacted to applause after “Cruel” by saying, “Are they clapping for the song, or because it’s over?” (Having consumed three hard drinks in the previous hour, I had to restrain myself from screaming at this jerk-bag.) Her new persona, the robot lady from Metropolis reimagined as a rock-star, rises above the bullshit and rules the stage. She’s affected a fire & ice stare, and engages in moments of mechanical choreography with her keyboardist/guitarist. The main event remains raucous guitar work that sounds more like orgasming machinery than your average six-string, but the accompanying spectacle hit Lynchian heights when she climbed up onto a platform and attacked her guitar as strobes went off and her shadow was cast twice against red curtains.

St. Vincent is playing the Jazz Fest on July 5. Don’t miss it. ■