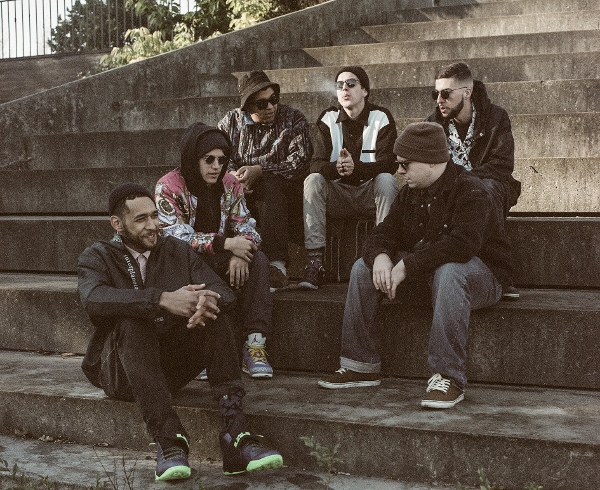 Before jumping to any conclusions about a record by six rap kids from south of the river called Montreal $ud, Dead Obies’ spokesman YS Mccan would like to set a few things straight about country life and city life in Quebec.

“There’s a special state of mind in the suburbs. Les suburban kids, c’est les alienes,”  says YS, 24, communicating in a fluid mix of French, English and the easygoing franglais joual that he, his clique and many of their peers of all cultural backgrounds in modern Quebec speak daily.

“So [Dead Obies] speak of forgotten neighbourhoods — we speak of the blue-collar working class who are stuck there by social circumstance and work at the factories.”

“Rural life is 9-to-5,” YS laments. “Come home, watch the news, eat, sleep, start again tomorrow. The absurd cycle of living to rent yourself to a big corporation.”

“Le ‘sud style’ représent autant le dirtiness de la banlieue que le dirtiness du mindstate. The more something is off-beat inside you, the more repressed you become. We wanted to work around those themes” explains YS, an avowed “punk rock” kid seasoned, like all hell-raising kids from the regions, on equal parts Paris’s Berurier Noir and Longueuil’s Banlieue Rouge before connecting to hip hop.

“Rap represents where it comes from, and there has [traditionally] been something corny about representing the South Shore,” YS says. He pays respect where due but ultimately wants his band to transcend any out-of-touch “450” negativity.

“With the situation being how it is in Quebec, the biggest goal was to associate with non-hip hop business,” YS tells it. “My biggest personal goal is to be booked with bands like Malajube and We Are Wolves and Duchess Says much more than with other hip hop acts.

“Not because I don’t like them, of course — I’m a big fan of Alaclair Enselmble, of Loud Lary Ajust, of Kalmunity — but there is a jinx on hip hop in Quebec, a curse.

“That’s partly because of negative representation of hip hop in the media,” he continues, noting that Montreal $ud parallels the don’t-give-a-fuck attitude of hip hop culture — especially the rap game’s most influential outcast, the American South — with the political climate of young Quebec.

“We’re living in evil times in Quebec, and evil is just confusion,” YS believes. “I don’t think anyone is inherently bad, but people are just confused. These are confusing times right now, and discourse is the only answer.”

Montreal $ud, in its own official racine rap language, will surely provide a talking point or two to the province’s various political wolves, not to mention the rap community it’s about to re-invent, sonically and socially. But Dead Obies aren’t trying to win anyone’s election but their own, among peers.

“We refused, in making this project, to be aliens. There are people who feel like we do. It doesn’t matter if 15 people care, or the entire province.” ■