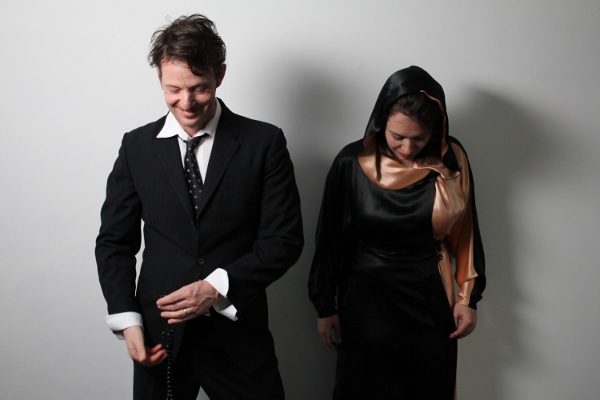 What comes first, the music or the lyrics?

That depends on the band, of course. A song often begins with chords, or a melody, a  vocal melody, a structure, then the lyrics. But in the case of AroarA and their In the Pines project, it was words — someone else’s words.

“Alice Notley, her poetry in general, is just incredible,” says Andrew Whiteman, one half of AroarA, head of Apostle of Hustle and once part of the defunct Broken Social Scene. “In this particular book [also titled In the Pines, published in 2007], there are little chunks of texts that look like lyrics, as opposed to how she usually paginates. And there were lines in her poem that I recognized from very old American gospel and folk songs — I would catch a line like, ‘Them that don’t like me can leave me alone,’ and I was like, wow, that’s from ‘The Wagoner’s Lad,’ and also the actual narrative arc of the series of 14 poems are pure dustbowl American gothic. The idea just popped into my head one day that it would be really cool to turn these poems back into the folk songs that they came from.”

Alongside his bandmate and wife Ariel Engle, a local chanteuse who you may know from Moufette and as a guest with a number of other acts over the past decade, Whiteman read the poems closely, grabbed snatches of words from each, rearranged them and wrote music — for every poem, there’s a song, the first batch featured on the recently released In the Pines EP, the second, larger batch to appear on an LP of the same name, out in the last week of August 2013. But just as they were selective and free with the words, the records aren’t sequenced in the same order as the poems in the book.

“We wanted to follow the musical sequence rather than the poems’ sequence, but that doesn’t prevent anyone from rearranging our songs and putting it back together that way,” says Engle. “It remains a piece of music; the story matters, but the music has to hold its own. There’s nothing more dreadful than a high-concept poetry record that’s unlistenable.”

AroarA’s EP is not that. While it doesn’t directly reflect the roots music references in the lyrics, it does suggest a classic aesthetic, even with its very modern songwriting style and arrangements. The duo renders it all with cigar-box guitars, keys, strings and voices. It’s lovely, even when you find out that the lyrics revolve around Notley’s treatment of and recovery from Hep C.

“Some of her lyrics obviously point to specific moments in her life, but what moves me so much about her is her ability to express something universal through her particular experience. Like, ‘My defect is all that I am,’” says Engle.

A major moment for AroarA came when the band played Paris late last year. Notley, a onetime New Yorker who made Paris her home years ago, was in attendance.

“I couldn’t see the audience, thankfully, ’cause it was dark,” Engle recalls. “I was much more aware of the particulars of the words, knowing that she was in the room. One of the lines was something her husband said before he died — it was really intense.

“But afterwards, she came up to us and we hugged each other, all three of us. We even got teary. It was really beautiful. And we were speechless, which is kinda perfect.” ■

AroarA launch their EP with a kind-of secret show on Friday, May 17. Details here.