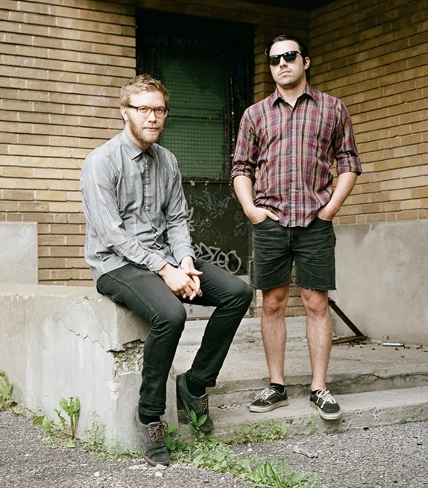 Um, grunge? To use a term that’s nearly as dated, but still wedged into contemporary rock’s golden era (the ’90s), let’s say alt- rock instead. Montreal’s Solids have played within the more melodic, less emo corner of that stylistic framework since 2010. Following 2011’s Generic Dogs EP and a pair of seven-inch singles, guitarist/singer Xavier Germain-Poitras and drummer Louis Guillemette are about to launch their debut LP, Blame Confusion, produced with a local alumnus of beloved ’90s band Tricky Woo: Adrian Popovich.

“We had friends who recorded with him, like people in Duchess Says, and they were all telling us to go with Adrian because he would, like, really get what we’re trying to do sound-wise. And they were right,” says Germain-Poitras. “At one point, he was like, ‘Is it ripping enough?’ He was really concerned about the LP being ripping [laughs].”

Popovich’s concern likely came from seeing Solids live, a forum where the duo is known to rip, extremely loudly. Despite Montreal’s controversial and tiresome noise bylaws, Solids have managed to melt faces and some of the minds behind them at every show, to the point where, as Germain-Poitras puts it, “volume could almost be considered a band member in Solids. We really like when it gets physical and stuff—when you can actually feel the sound hit you.”

If you’ve been subjected to this sonic assault in Montreal, chances are it happened at l’Escogriffe.

“I’m pretty sure it’s the venue we’ve played the most—like, probably 10 or 11 times. I just like the vibe there. It’s always really, really hot, though—kinda hard to breathe sometimes [laughs]. But it’s a really fun venue to play—like, you get this proximity with everyone. ‘Cause we’re only two, the crowd is part of the show. I mean, we don’t really want to be the only thing to see during the performance.”

Though they played l’Esco as recently as this summer, with expanded exposure around this new release and each North American tour, they’ll be playing bigger rooms that will likely find them looking down at their audience. “What we’re working on at the moment is transposing the energy of a small room to bigger venues.”

They’re also working on diversifying the show to reflect the record. Because for every five ripping peaks, there’s a tender valley. Just don’t expect Solids to unplug.

“Ha-ha, no. But we wanted to go further in both extremes: to do some quieter songs and have more aggressive ones, too. I think that’s something we achieved. We’re really happy with the variety of energy we have on the record.” ■