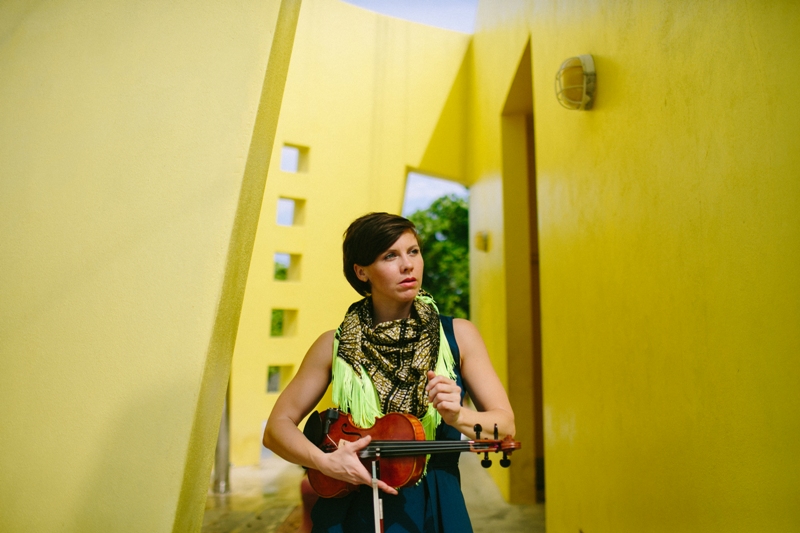 Between world tours with Arcade Fire, composer/violinist Sarah Neufeld has cultivated an impressive solo career, currently in full bloom with her sophomore record The Ridge. It’s the follow-up to 2013’s Hero Brother, and the record she made last year with her musical collaborator (and boyfriend) Colin Stetson, Never Were the Way She Was.

Now, as Neufeld is touring in support of The Ridge — before she accompanies Stetson at release shows for his new record, Sorrow: A Reimagining of Gorecki’s 3rd Symphony, and just as Arcade Fire are in the early stages of making their fifth record — she and Stetson are readying yet another record as part of a new (as yet unnamed) band.

Neufeld shared this news and more during our interview in late March.

Lorraine Carpenter: Considering your schedule and your productivity, you must write on the road.

Sarah Neufeld: Oh yes. I started writing pieces for The Ridge during the Reflektor tour. I’m really good at starting pieces on the road and not so good at finishing them, so I was pretty excited by the end of that year to have a pile of stuff to sort through — all just sketchy iPhone recordings, but that works for me. I record everything and I get things up to a certain point where they start to get working titles and beome recognizable fragments of compositions that I believe.

At that point it was like a waterslide — I kind of shot myself out of that tour and landed in the finishing of writing Never Were the Way She Was and then the recording of it, right into three weeks of polishing The Ridge and then recording that.

I had been brewing up The Ridge in my mind for that whole year, and there was a lot up there — working through it was really fun. It was actually the first time I’d spent a lot of time alone, probably in my whole life, and alone in the woods, which can be creepy. But it was really good — I let myself run with a lot and I ended up writing lyrics in that capacity, in that internalized headpsace.

By that point, I had moved through the body of work that was Hero Brother and I felt like I was ready to go a little bit further. The atmosphere felt more spacious, lighter — I wouldn’t call it simple, but the music was easier to me.

LC: [Arcade Fire drummer] Jeremy Gara plays on the record, but I understand that he had a role in the development of the sound.

SN: Initially we didn’t know what we were going to do together. I knew that the songs were going to be finished on my end and that he was going to bring a new energy into it. We thought it might be electronic, and then we got together and the drums, his more traditional rock sound, really brought it into where we wanted it to go. He was brought into the pieces in an integrative way — I wasn’t telling him what to play, and that opened a whole bunch of other doors to me as well.

I got Colin involved to create more depth to the bass work I had done and it became this really fun collaboration. He just added layers to what I had done, but he has this beautiful, strange instrument called the Lyricon, which nobody has ever heard of. That’s just a little dash of magic on the record, but listening to it, it does have these almost furry, deep, dark bass layers, so that’s the magic touch of Colin Stetson’s Lyricon.

LC: Are you already working toward your next solo record?

SN: I get really inspired when I’m playing a lot, and so of course… I’m bringing [drummer/percussionist] Stefan Schneider of Bell Orchestre with me on the Ridge tours so we’ve just been shredding together for hours every day in Montreal. We’ve been in that zone together we’ve been playing together for years and years and years we’ve got a lot of really natural, kinetic, physical, musical energy together. It’s been a really, really fun process getting back into the physicality of playing that work — it is really hard physically to pull off this show, so we’ve been sweating out the details, which is good. Through that cathartic practise-practise-practise mode, I get really inspired to write music, and I feel like there’s a glimmer of what the next one could be, but I’m gonna be extremely patient with that ’cause there’s a lot going on right now.

Colin and I have started tinkering around with a new band, with Greg Fox from Liturgy and the Gorecki project and his partner Alex Drewchin — who is also Eartheater, who’s opening for me this spring — and Justin Walter, who makes amazing really organic ambient electronic music. So that may be the next record, or a new solo record. And Arcade Fire are playing some shows, and it’s the early days of writing a new record.

It’s one of those junctions — I need to breathe — but I’m also really grateful for all these incredible creative opportunities that are going on. ■