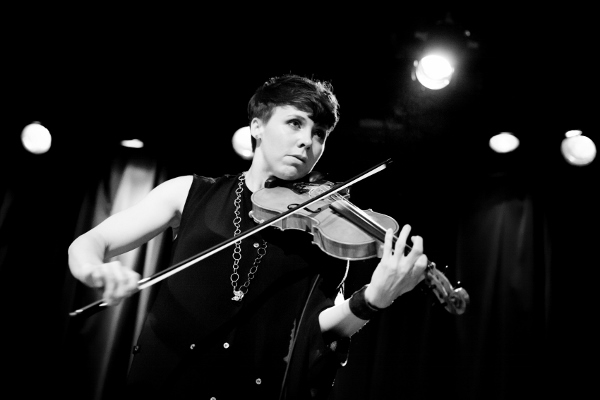 Sarah Neufeld is spellbinding. The focus in her eyes, the deliberate force of movements, the way she puts her whole body into squeezing sound from her violin—all of it is visible to the naked eye, whether you’re watching her from the merch table at la Sala rossa or the back hill at Parc Jean Drapeau.

She’s the smaller of Arcade Fire’s two violinists (three if you count Owen Pallett), and one of the most intense players on that stage — which is kind of like saying that Robert De Niro is one of the most Italian dudes in the Godfather movies.

She’s also a yoga instructor (at Moksha — she opened up her own branch of the local company in NYC), a practice that clearly complements the physicality of her music gigs. She’s shacked up with bass sax star (and Arcade Fire part-timer, AND recent Cult MTL cover guy) Colin Stetson, too, which lends some relevant context to her decision to pursue a one- instrument solo project. Three months after the release of his latest record, the same label, Montreal’s own Constellation, is releasing her debut LP, Hero Brother.

I spoke to the Vancouver native recently about where her love of the violin has taken her.

Lorraine Carpenter: Have you been playing and studying consistently since you were a toddler?

Sarah Neufeld: I took Suzuki method and then classical lessons until I was 14, and then I quit—I couldn’t deal with becoming an orchestral player, and it felt like that was what was expected of the kids that were around me, so I kinda just chucked it away. I played guitar and sang in high school bands; I started taking guitar lessons ’cause I wanted to rock the Hendrix solos. But I had played violin in those bands, too, and that’s how I kinda reconnected to the violin. I knew that I was a lot better at the instrument I’d been playing since I was three, so I put a bottle-cap pick-up on it and just started to have fun with it.

And then I went to Concordia and I studied jazz, and that really taught me a lot that I hadn’t been doing. I found more dedication on the technique side in university. Jazz was such an ear-bender coming from more of a classical background. Jazz improvisation was incredibly strengthening and taught me a lot, just to learn to hear in music. I majored in electroacoustics, which is another new way of hearing and working with sound and texture.

SN: Bell Orchestre. Richard [Reed Parry, also of Arcade Fire] and I were studying together and we were writing in composition class, which is where the idea of Bell Orchestre started. And then we kept doing that, and Arcade Fire was starting up and I jumped in there, and both bands were making records and then those projects flourished enough that I didn’t move away [laughs].

Sometimes when you’re a young starving artist working three waitress jobs, you’re like, “Um, maybe I should get outta here and go get a job, or a master’s degree,” and I was on that sorta precipice. I love that the turning point in that decision was Jeunes volontaires—we got that grant to make our first record and so I just planted my feet down in Montreal. That was about 2002.

But then, over the years, I started feeling like I needed to explore my own solo compositions again. I just started to scratch the surface of writing alone, ’cause I’ve always been so deep in these awesome collaborations. The solo project came about when I had a little bit more time to myself, during the Suburbs year, and then shortly thereafter I really hit the ground running with a bunch of pieces, and I just worked, and worked, and worked. About a year ago it felt like it was gonna be a record.

LC: When did you play your first solo show, and how did it come about?

SN: It was at [Royal] Phoenix in December 2011. They asked me to play one of their events, and I had written four pieces in collaboration with some friends who were making films. I got a kick in the pants from Val, one of the [former] owners from Phoenix, who was like, “Okay, I need another four songs, right now” [laughs]. It was really fun, probably not the best show in the world, but it was debuting a bunch of really, really, really fresh material. Then I kept working and I kept playing shows. I opened a whole bunch for Colin that spring, and wrote a ton in the summer and the fall, and then made the record in January. I’ve toured quite a lot since then. Now it’s a whole other animal—I’m quite comfortable playing solo. It’s been a really cool practice, because I hadn’t really done anything that new  in my musical life for ages.

LC: There’s a sharp contrast between the sombre mood of Hero Brother and the look and feel of the show, and what Arcade Fire does.

SN: Oh, yeah, that’s about as different as you can get. Bell Orchestre is more instrumentally involving, and I’d be super active rhythmically with all sorts of cues in that band, so there was a bit more heightened pressure for me individually than for me in Arcade Fire. And then take that and condense it even more for the solo project—it was definitely the most pressure I’ve ever experienced. I like it. ■