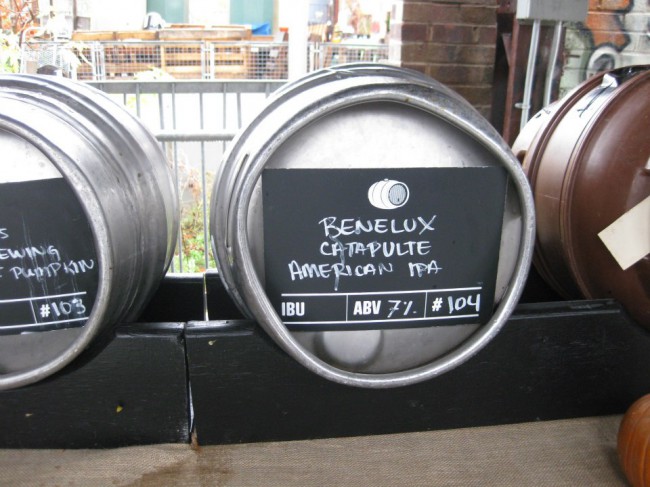 If the phrase “cask beer” conjures thoughts of a nasty pint of warm, flat English ale for you, then… well, okay, you’re partially correct — but mostly wrong. Many beers are best enjoyed on cask, and this Saturday, the Benelux brewpub will be hosting the seventh of its biannual cask festivals.

For head brewer Benoit Mercier, cask beer is an “opportunity to taste something new; it’s an art in itself.”

He’s not kidding. Benelux has emerged as one of Montreal’s greatest proponents of cask ale — that is, unfiltered and unpasteurized beer that is served from the container in which it’s aged — in the last few years. They started serving the occasional cask at the bar in 2008, but quickly ramped up, to the point where they now serve at least one cask every Thursday evening. The cask event this Saturday is on whole other level, though. It will feature no less than 17 cask brews from some 14 of Quebec’s craft breweries.

Cask-conditioned ales comes to us from England’s traditional beer culture. It nearly died out after World War II, having been replaced by lagers and a few ales served on draught from kegs. Thankfully, it has come back to some prominence, thanks to valiant efforts of the U.K.’s own CAMRA, the Campaign for Real Ale, starting in the 1970s. Since then, cask-conditioned ales have become a staple of the craft brewing scene both in the UK and around the world.

It’s true that properly cellared and served cask ale has noticeably lower carbonation levels than kegged beer, but it’s not flat. It should be served at cellar temperature — below room temperature but well above the three or three degrees Celsius typical of draught beer. The lower level of carbonation allows malt flavours and textures to come across the palate more easily, without the interference of the bubbles and carbonic acid that come with higher levels of carbonation. And the warmer serving temperature allows the fruity flavours and aromas from the hops and yeast to really open up, while colder temperatures tend to suppress them. Those characteristics make cask ale the ideal way to serve the English ales with which it is most identified, but brewers are packaging an increasing variety of beers in casks these days.

Cask ale is usually unfiltered and always refermented in the cask. It is served almost immediately after this refermentation, about a week after it has been casked. It is typically dry-hopped as well, meaning that whole hops are added to the cask at the same time.

“I would say that it is the signature of cask ales,” says Mercier.

Dry-hopping gives another dimension of freshness to the beers, adding herbal, fruity, citrusy or resinous aromas and flavours, depending on the hop variety used, and it further differentiates cask ale from its kegged counterpart. The relative youth of the beer and the dry-hopping result in a freshness in flavour that has few parallels in the beer world.

Some of the beers I’m most looking forward to this Saturday: The Polaris IPA by Trois-Mousquetaires, which features the Polaris hop, a new and reputedly intense German variety that I’ve yet to try; an unfiltered version of the Jukebox American Pale Ale, and Brasseur du Monde’s Big Ben Brown Porter.

Not everyone is able, or chooses, to drink beer, so a couple of black sheep are worth mentioning: Brasseurs sans Gluten’s Glutenburg Pale Ale (a gluten-free ale) and a lemon-infused cider by Vergers de la Colline, both served on cask.

Benelux’s own offerings will include their Catapulte IPA, a dyed-in-the-wool West Coast IPA that was brewed in collaboration the Zulogaarden brewery of Barcelona (I’ve had it — it’s awesome), and Psychlo, a tasty American Rye Pale Ale.

Whatever you’re partial to, Saturday’s event is the perfect opportunity to get your drink on and enjoy the freshest of craft beer, on cask! ■