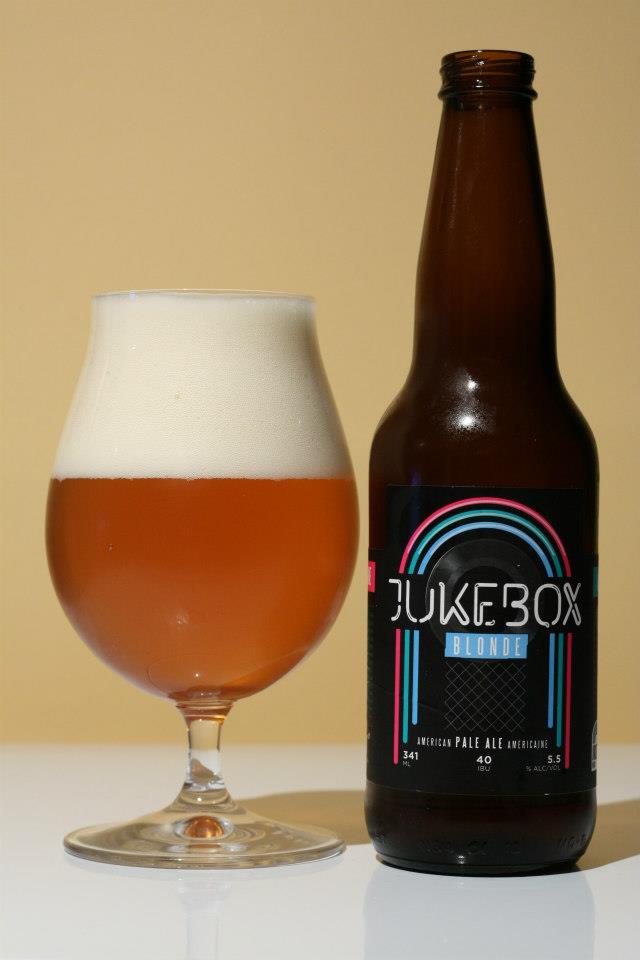 If craft beer south of the border is known for anything, it’s the explosively hoppy, aromatic and often bitter American ale styles, particularly American Pale Ale and India Pale Ale. Many of the smaller producers in our own craft beer scene have taken inspiration from these beers, reproducing a taste experience that many of us have longed for after trips to the U.S.

But a new local upstart hopes to bring a dose of American flavour and attitude to the market.

“I want to be known as the American brewery in Quebec,” says Renaud Gouin, founder and proprietor of Jukebox Beer. He launched the brand this past summer with (so far) a single product in its lineup: Jukebox Ale. As is typical of APAs, it’s golden in colour, has a firm bitterness and a fruity, citrusy flavour.

The APA style of beer has developed in tandem with the U.S. craft brewing movement since the late 1970s. It features a simple, restrained malt character, with less sweetness and caramel taste than its English counterpart. This typical restraint in the malt helps showcase the American hop varieties that are known for their intense flavours and aromas as much as their bitterness.

When I first tried Jukebox, I was surprised to find an intense malt presence, something not belied by its pale colour. “There’s a lot of malt backbone. I don’t want this to be a bitter, bitter beer that you just can’t drink anymore,” Gouin says.

Both APAs and IPAs are sometimes noted for being one-dimensional in their efforts to fulfill an ever-expanding hop craving among beer drinkers. Clearly, Gouin wants to fulfill that craving, too, but he prefers a balanced approach.

“I’ve been inspired by Lagunitas. They taste hoppy, but the malt is there. It makes them drinkable,” he says of the Petaluma, California-based brewery.

Until recently, the product being offered by Quebec’s established microbreweries has been noted more for its debt to Belgian and other European beer styles, with producers like Unibroue focussing on strong Belgian ales, and les Brasseurs RJ, until recently, on cleaner German beers. Anglo stalwart McAuslan produces beers in a decidedly English vein.

At least a couple of these microbreweries now offer their own take on hoppier ales — both McAuslan and Boréale have come out with IPAs in the last year and a half, an overdue reaction to long-standing demand among beer drinkers that has so far only been recognized by Quebec’s smaller producers.

While Jukebox currently only produces one beer, Gouin hopes to fill out the lineup in due course, still keeping to the APA theme. Gouin is an avid beer aficionado, a certified beer judge and a home brewer, so he is certainly interested in beers beyond the American styles. But, he says, “If I were ever to do a style that’s not American, it wouldn’t be on the Jukebox label.”

I asked Gouin what his next offering might be. “Either an amber, an IPA, or maybe a poll to see what people would want,” he responds.

I tell him that the IPA will surely win. “That’s it. I might wait for the amber.” ■

Jukebox is available in some bars and specialty grocers, including Brouhaha, Fromagerie Atwater and le Marché des saveurs at the Jean-Talon Market. Check Jukebox’s Facebook page for more distribution points.