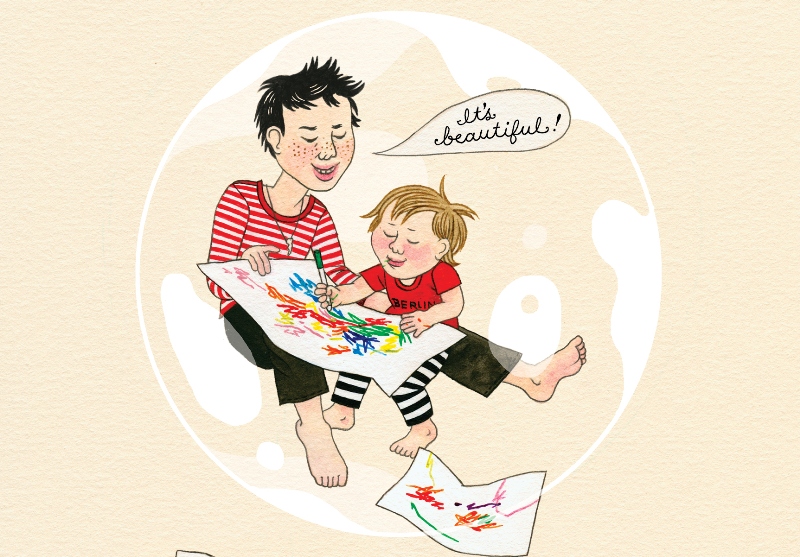 It’s similar to how I’ve chosen to avoid the recent wave of videos depicting toddlers wailing after being detained by ICE agents at the U.S. border. It’s not the detention they care about, it’s being separated from their loved ones. It’s the notion of enduring something long and difficult and, in the end, not having the safety of hugs to fall back on.

So in an act of emotional self-preservation, I generally scroll past graphic content with an instinct to swipe away from visual depictions of human suffering. I don’t seek to isolate myself from the news — I just don’t need my reporting to be so visceral.

I decided to read this book, A Bubble, in the most sterile, emotionless environment possible: over my morning coffee, at my desk as I checked my emails. As I read, unsurprisingly, tears streamed down my cheeks. I identify, at too primal a level to describe here, with the simple desires of motherhood. Living and dying is one thing — anyone can do that on their own. But being in charge of other humans, especially children, particularly your own children, is an indescribable, inescapable duty.

A Bubble — this is how illness felt to Geneviève Castrée. The isolation of rest enveloped her, while as a parent she perhaps wanted nothing more than to be there, at every moment, with her child as she played, or drew, or ate toast. But what happens when the bubble pops? The book doesn’t answer the very question it poses. It ends, instead, with a disclaimer from the author’s partner: she didn’t get to finish.

It has been 18 years since I last spoke with Geneviève’s partner Phil Elverum, an unremarkable fact. Our bands played a show together in the ’90s — at the Jailhouse Rock, if anyone remembers that place. That was a lifetime ago. His take on the concept of the bubble was heavy, to say the least.

“It is kind of too big of a question. ‘The bubble’ is the feeling of mortal panic that consumed our household for 13 months in 2015/2016 while Geneviève fought cancer and then died. The bubble for Geneviève was a different thing, something about her focus and limited attention and consumption in hope and healing. But you asked about my experience. It was mostly numb panic, autopilot, taking care of the real world and trying not to crumble.”

I continued, asking if the bubble still existed in some way: “This particular bubble is no longer present. It didn’t really burst like in the book. We were never really relieved in the way that Geneviève was hoping for in the book, but the bubble is gone. Other bubbles are here, but probably all houses, all families have to navigate their own different types of bubbles. We are not in such a disorientingly apocalyptic bubble these days.”

And so how does a child reconcile the bubble? He said, simply: “She likes seeing herself in the book, and seeing Geneviève.”

As I write this, my five-year-old son digs through a bin of Lego, searching for just the right piece. The plastic rectangles tumble over each other, causing an unremarkable noise of cascading toys. And yet, something so mundane is in many instances a luxury. Joy, simple pleasures, are easily taken for granted, and in some darker cases, it is simply taken away. ■

Geneviève Castrée’s A Bubble, published by Drawn & Quarterly, is in stores now.

See our recent interview with Phil Elverum about grieving through music here.