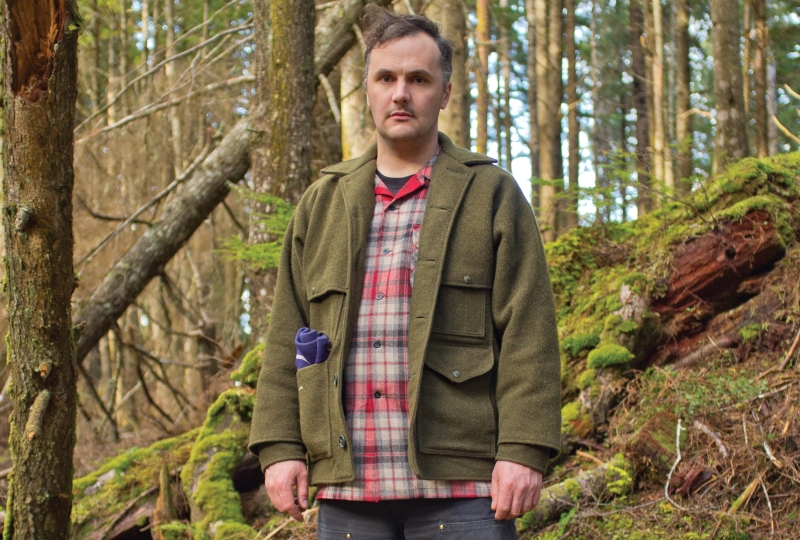 “I’m not good at remembering things I schedule but that’s cool, I’m available,” is the first sentence I got out of Phil Elverum. He’ll later deem himself an “amateur lo-fi guy” and poke fun at music journalists for only talking about “what kind of pedals My Bloody Valentine used.”

He’s not lost his sense of humour, but he also considers himself a completely different person in the context of his latest work and the immense trauma that went with it. His wife, Québécois musician and cartoonist Geneviève Castrée, passed away just over a year ago after a battle with cancer and A Crow Looked at Me details his experience with that trauma.

It’s not easy to talk about and Elverum still wonders about the perverseness of everything surrounding it — press cycle, tour — but I believe it’s an important, human work and I tried to have an honest conversation about it with him. Here’s some of the things he had to say:

Donovan Burtan: It comes across almost like a list of everything that was going on in your head in grappling with this tragedy, but I wonder if you had any sort of goal going into record. I feel like the end has some sense of closure and I’m assuming it’s therapeutic. What were you looking for with this process?

Phil Elverum: No, I didn’t have a goal. I was just in an unpremeditated way going with the flow — it just happened that way. I wasn’t planning on releasing it, I was just doing the thing that I usually do, which is refine my thoughts and words into something a little more sharp, (in) song form. With this, it seemed perverse to be public about it — I was just doing it for my own processing and after it started to become more solidified, I just realized that I liked it a lot. I thought it was good so that’s why I put it out.

DB: There’s lines on there like “there’s nothing to learn,” “it’s not for making into art” — were you wondering if this is the right thing to do?

Phil: Oh yeah, I mean I still feel like it’s the wrong thing to do in a lot of ways. Even though there’s been so much positive feedback, that perverseness of it is still very true to me.

Before Geneviève died, there was over a year of treatment and just living in the state of freaking out. During that time, all the things that used to bring me a sense of meaning and depth and comfort, all these books in the house of poetry, philosophy and everything — all of it was just empty and useless, none of it felt relevant and the only thing that did feel soothing was human accounts of everyday, nothing happening, just life or people having legitimate and authentic human experiences with no interpretation or metaphor.

I think that’s why I made the songs the way I did and that’s what I meant by those lines: “Poetry is dumb” or “it’s not for singing about.”  That gulf between art and music versus the actual experience of life — that’s the distinction that I was trying to draw.

DB: I think there’s a shift from the atmospheric stuff of your past work to almost like prose lyrically. Do you think that is a product of this lost interest in your past?

Phil: I just feel like I became a different person almost overnight because of trauma. Everything was different — not just my aesthetic and artistic interests, but what type of food I wanted to eat, what I looked like. Like when people get struck by lightning and they have white hair all of a sudden — it felt like that.

DB: Now that you’ve done some shows, do you think the songs evolve?

Phil: No, I’m pretty faithful to them. They’re not really for jamming or collaboration or interpretation, they’re pretty set in stone.

The way I made the album, there’s an instrumentation: bass, piano, drum machine, electric and acoustic guitar. I like it, it’s sort of like this formula for the album that I think would be fun and pretty easy to make that happen live.

I don’t do that because I feel like there’s something wrong with performing these songs and enjoying it (laughs) with friends, you know what I mean? Like being on stage and “ahh the piano kicks in, that’s a cool part.”

DB: I guess that again taps into the “there’s nothing to learn” concept like if you’re sort of trying to make a really positive musical experience out of it, you’re kind of trying to learn something in a way?

Phil: It’s a built-in contradiction the way I did this. I tried to make pretty and non-challenging music — in terms of the music part, the content of the words are maybe challenging and heavy — the music itself I tried to just make it be as good as I can.

I’m like an amateur lo-fi guy, I’m not like a Nashville studio musician, but I tried to make folk/country/pop, neutral music so that the words and ideas could have a foundation that wasn’t asking too much of the listener, just sort of carrying these words along. The idea of making it too pretty or too enjoyable starts to blur into perverseness I think.

DB: The press cycle, has it been weird to hear these good reviews of the album?

Phil: Every single thing about this is weird, but it’s nice to be appreciated. I was pretty apprehensive about that aspect of it, I had no idea how people would react, if people would be immature or offended about it. I felt like it was sort of a new thing — I didn’t know of examples of this type of thing to look at, to see if the dumb world of music writing would be emotionally equipped to handle legitimately traumatic, human stuff.  You know, it’s usually talking about what kind of pedals My Bloody Valentine used.

I was surprised at how intelligent and mature and compassionate almost everyone has been about it. It seems like the magazines or websites have been assigning it to their most mature and intelligent writer, which is nice.

It’s kind of reaffirming about humanity to realize that, in general, people out there are equipped to respond to this kind of thing with compassion and intelligence. I don’t often go through life feeling that way about human beings so it’s nice to have that reaffirmed.

DB: There’s one part that stuck with me a lot, the mention of the counsellor.  I just think there’s something really beautiful about the way that you make sense of this other tragedy that happened with “as if her work was done” — was that just a thought you had when you got that news?

Phil: When I found out that she died it just seemed so ridiculous that that could be true. This person that we had been discussing mortality with so deeply for a year all of a sudden out of nowhere died — she had a heart attack and it was just like a joke, almost. It was just an absurd exaggeration. Like nobody would write that if it was fiction. I just sort of added that to my pile of processing — I had a lot going on already.

DB: For the tour, you have some new songs coming — do they capture different moments of you growing and dealing with this?

Phil: No, I think the new songs are way better than A Crow Looked at Me. Maybe other people won’t feel this way, but I do. I’m really proud of them — they’re deeper and broader. There’s some moments about how I’m doing, but some of the reviews of A Crow Looked at Me have talked about how it’s a beautiful tribute to my wife and I don’t agree with that. It’s not about her at all. If I wanted to make a tribute to her, it would be a shitty one because I’m just talking about my own suffering — that’s not who she is.

I don’t think that’s what I’m making now, but I’m thinking about it more. Kind of illustrate her as a person more — my life now revolves around being the curator of her memory and legacy.  Whatever remains of her, it’s on me now and how crazy it is. A lot of the songs are about that, and living with an absence. ■