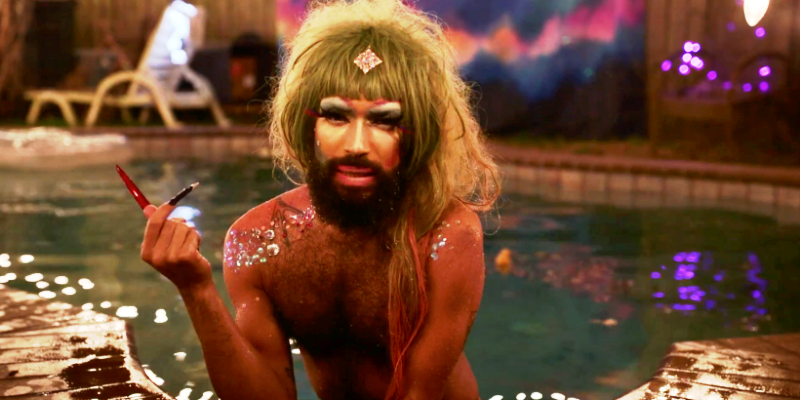 The spring harvest of new music by local bands is in full effect, yielding some very creative visual accompaniment. Check out the best of the bunch below:

On May 19, Audrey Ann Boucher and Kyle Jukka (bka She-Devils) will release their self-titled debut LP, a record that straddles lo-fi dream pop and sci-fi-laced rock ‘n’ roll. Preview the record via this self-directed video:

The heaviosity never stops for this baritone sax master and contemporary-classical composer, whose reimagined Gorecki symphony is being followed up by All This I Do for Glory, out on April 28 (52HZ). In advance of that, here’s a novel live video shot and edited by Derrick Belcham:

Timber Timbre’s fourth album Sincerely, Future Pollution just came out this past Friday, April 7 on Arts & Crafts, and while we’re waiting for their hometown show at Olympia on July 2, check out this homemade, lo-fi video by/starring artist and poet Cristine Brache.

Saturday Night is the debut solo album by the singer from post-punk/indie rock act Ought, and if you missed the show back when the record was released by Jagjaguwar in February, he’ll be back on stage at Bar le Ritz PDB with the Orwells on May 23. This second video from the record (the first was “Tall Glass of Water”) was directed by U.S. Girls’ Meg Remy and marries a slow-take serenade sequence with trippy nature imagery.

Twin Solitude, the third LP by this acclaimed singer-songwriter (released by Secret City in February), consolidates the classic characteristics of the genre with 21st century spark. Sample his sound here, with a visual aid care of director Kaveh Nabatian.

The latest video from Little Scream’s Cult Following record (released by Merge just under a year ago) — inspired by a sea creature sequence in 2005 Taiwanese film The Wayward Cloud — was directed by Kaveh Nabatian and stars New Orleans drag queen Neon Burgundy.

Directed by Antoine S. Legault, this video puts fittingly moody images to the darkest track from Tölt, the debut album by composer and pianist Jade Bergeron. She’s been working on new music with Broken Social Scene’s Charles Spearin and Godspeed’s Efrim Menuck, and will be playing la Sala Rossa on May 18.

Icelandic singer-songwriter Emilíana Torrini joins in on this track by producer Kid Koala, from his album Music To Draw To: Satellite, released by Arts & Crafts in January. The visual side of this trip was abetted by “chemical puppeteer” Karina Bleau, puppeteer assistant Felix Boisvert and cameraman AJ Korkidakis.