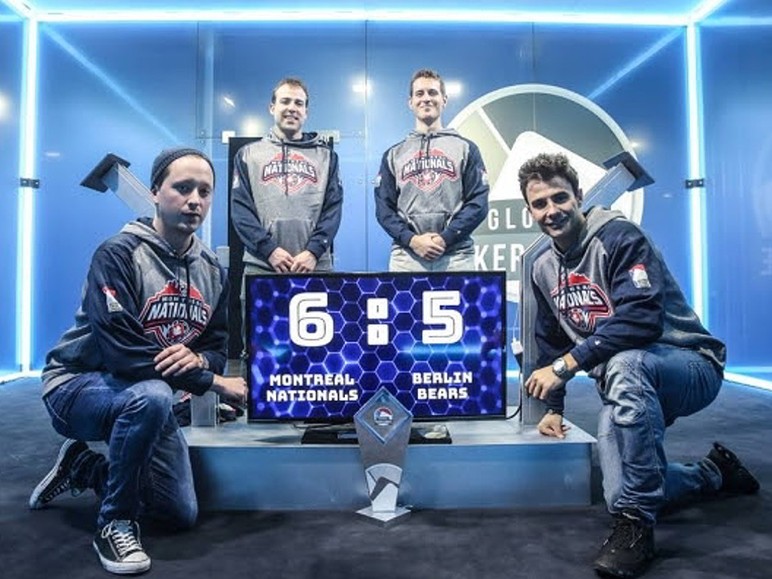 With the Habs battling by the day to top the National Hockey League’s overall standings, Montreal residents are cautiously optimistic that the Stanley Cup could return home for the first time since 1993.

But while we wait for the hockey season to play out, the city recently welcomed another team of hometown heroes into the ranks of title-holders.

On the 1st of December the Montreal Nationals captured the crown to become champions of the inaugural Global Poker League (GPL) season.

Getting a Grasp on the GPL

The GPL is a first of its kind league dedicated to “sportifying” the traditionally solitary game of poker. The concept was conceived by French entrepreneur Alexandre Dreyfus, owner of Mediarex Sports and Entertainment. According to Dreyfus’ stated mission, the GPL was launched to offer poker fans a true sports-style experience, complete with franchises, teams, and major events held in arenas while players compete within a distinctive glass structure known as the CUBE.

Ahead of its debut season, the GPL created 12 franchises based in major cities around the world, and used a successful draft format to fill out the rosters back in February. Each team’s draft process was led by a team manager, and in the Nationals’ case, that duty fell on Montreal native Marc-Andre Ladouceur.

A veteran of the live tournament circuit, Ladouceur has won more than CAD$2.2 million over his successful career as a poker pro – including his top score of CAD$615,940 from finishing in 13th place at the prestigious World Series of Poker (WSOP) Main Event in 2012.

On draft day, Ladouceur filled out the Nationals’ roster with a pair of Quebec’s top poker players in Pascal Lefrançois of Rosemere, and fellow Montrealer Jason Lavallee – along with Ontario natives Mike “Timex” McDonald and Xuan Liu. Rounding out the roster was Swedish-born Martin Jacobsen, who is best known for winning CAD$13.24 million as the 2014 WSOP Main Event champion.

The Path to the Playoffs

The GPL began regular season play back in April, with the Nationals competing against the L.A. Sunset, the Sao Paulo Mets, the San Francisco Rush, the New York Rounders, and the Las Vegas Moneymakers within the Americas Conference. As their team name suggests, the Las Vegas Moneymakers were managed by none other than Chris Moneymaker – the American accountant whose improbable victory at the 2003 WSOP Main Event set the stage for the famed “Poker Boom.”

Six more teams filled out the Eurasia Conference, including the Moscow Wolverines, the Berlin Bears, the Hong Kong Stars, the London Royals, the Paris Aviators, and the Rome Emperors.

By the time the regular season wrapped up in late October, the Nationals had staked themselves to an overwhelming lead over the entire league – topping the Americas Conference with 212 points to best the Sunset with 194 points. None of the teams in the Eurasia Conference managed to accumulate 180 points, putting the Nationals’ regular season dominance into perspective.

The GPL regular season consisted of several alternating poker formats, including six-handed tournament tables and individual matches between single players. Points were earned throughout the season based on placing order in full table games, or the results of one-on-one contests.

The top four teams from each conference secured a berth in the playoffs, while the bottom two from each were eliminated, which meant the Rounders, Moneymakers, Aviators, and Emperors would all be forced to watch postseason play from the proverbial sidelines.

Never a Doubt for the Nationals

In the Conference Semifinal round, the top-seeded Nationals went toe to toe with the fourth-seeded Rush, a star-studded team managed by globetrotting “homeless millionaire” Faraz Jaka.

Jacobsen and Liu were left off of the four-player playoff roster, leaving a pair of Montrealers in Ladouceur and Lavallee, joined by a Quebecois in Lefrançois, and Waterloo, Ontario’s McDonald to carry Canada’s GPL hopes.

The best of seven series – played out through “heads-up,” or one-on-one matches – came down to the pivotal seventh match, but only after the Nationals came back from an early 0-2 hole. At closing time, however, McDonald was able to prevail over Jonathan Jaffe to send the Nationals through to the Conference Finals.

There, the Nationals squared off against the second-seeded Sunset, and this time it was Montreal that staked itself to a 2-0 lead, courtesy of wins by McDonald and Lefrançois over Chance Kornuth and Olivier Busquet. Sunset team manager Maria Ho got her team on the board by beating Ladouceur in the third match, and Kornuth followed up with a victory over McDonald to even the series.

Lefrançois finished off an undefeated day of playoff play in the fifth match, winning his third straight heads-up duel, before Ladouceur bested Ho in a battle of team managers.

That set the stage for the first ever GPL Finals, pitting the Nationals against the Bears.

The Finals were designed as best-of-11 match series, and Mizzi got the Bears on the board first by beating McDonald. In the next match, Lefrançois continued his undefeated playoff run by downing Perkins. Lavallee and McDonald struck next, defeating Rast and Perkins respectively, to give the Nationals an early 3-1 lead. In doing so, Lavallee ended Rast’s own undefeated playoff performance.

Rast took the fifth match from Lavallee to avenge the previous loss, but Lefrançois’ streak continued with a win over Mizzi to make it 4-2 overall. Perkins upended McDonald in the next match, bringing the Bears back to a 4-3 deficit, but Lavallee overcame Rast in the following match to extend Montreal’s lead to 5-3.

One loss away from losing the Finals, the Bears’ backs were against the wall, but Mizzi responded in fine style, serving Lefrançois his first loss of the playoffs and clipping McDonald to even things up at 5-5.

In the pivotal 11th match, both teams sent their hottest players into the fire, as “King Rast” faced off against Lefrançois. In the end though, Lefrançois prevailed over his more experienced opponent to deliver the first GPL Championship the Montreal Nationals.

The winning team was awarded USD$100,000 in prize money to divvy up, but for a group of high-stakes pros who regularly buy into tournaments for $25,000 or more, money was clearly not the motive. Instead, as McDonald explained to media outlets shortly after the final card was dealt, GPL participants played for pride more than anything else:

“If [the rest of the Nationals] were watching Pascal at a final table playing for 10 times these stakes, we’d just be sitting there having a good time. Here, we were nervous. We were on the edge of our seats. This really made it about the poker rather than about the money, and I think that’s what the goal of sportifying poker was – is to remind you of right when you were just starting out in poker, and I think the GPL has accomplished that.”