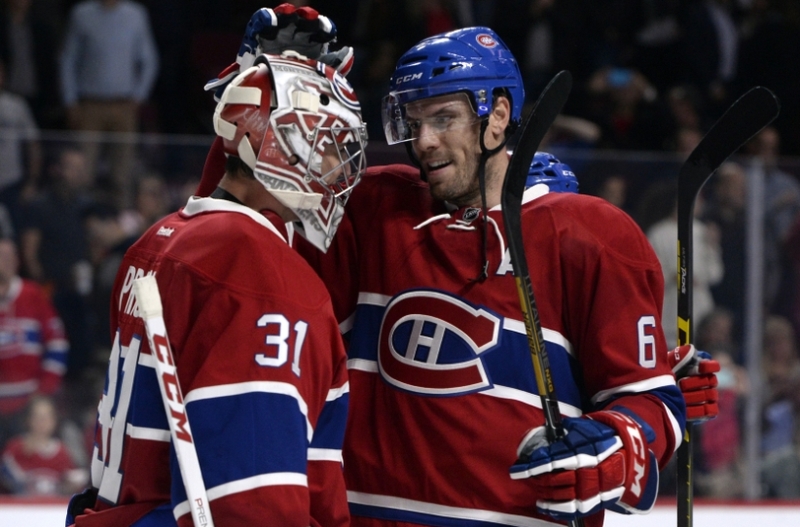 After singing the praises of Alex Galchenyuk in this column last week, the U.S.-born Centre had arguably the most difficult week of his young career. After missing some key scoring chances in games against West Coast opponents, his mishandled pass was also the key culprit on the game-winning goal scored by the Sharks.

This unfortunate week came to a head after he left the game vs. the Los Angeles Kings after a harmless looking collision with another player. On Monday, the Canadiens released an official statement, ruling him out indefinitely with a Lower Body Injury. If this term makes you cringe, it’s likely because it was the exact terminology used to describe Price’s injury last year, an ailment that prevented him from returning for the rest of last season. The Habs are being cautious in revealing the exact nature of the injury, as is the norm in the NHL. Hiding the nature of injuries is also meant to be a measure to prevent future opponents from physically targeting that part of his body when he does finally return to the ice.

But we are neither here nor there, as the Canadiens in the interim find themselves with a huge void to fill. Will the #1 centre position revert back to David Desharnais by default? Will Tomas Plekanec re-discover his scoring touch? Either way, replacing the team’s leading goal scorer will be a difficult adjustment to make for Coach Therrien.

A glass half-full approach to this conundrum suggests that the Galchenyuk wasn’t even playing as a Centre a little over a year ago, and that a 1-2 punch of Desharnais-Plekanec has worked fine in seasons past. In fact, it’s been a constant since Marc Bergevin and Therrien took over in 2012.

A pessimist might point to the fact that both Desharnais and Plekanec have struggled mightily for quite some time and Galchenyuk’s loss might spell trouble. But the truth lies somewhere in the middle as the onus is not only on Plekanec and Desharnais to elevate their play, but also on the Habs leadership core in Max Pacioretty and Brendan Gallagher, who’ll have to pick up some of the slack as well.

We recently passed the season’s quarter mark,  so in addition to a summary of each game (in 140 characters or less), I figured we’d also have some fun grading each player’s performance so far as well.

Carey Price: He is well on his way to another Vezina trophy and quite possibility another nomination for the Hart. League MVP. He’s shown very little rust after missing nearly 3 quarters of last season.

Al Montoya: Sadly all everyone will remember is the game vs. Columbus where he allowed 10 goals when in reality he has been doing an adequate job playing Robin to Carey’s Batman.

Alex Galchenyuk: Has scored at least one point in 80% of the team’s games. Showing much more swag than years past. Did leave game after a collision with Kings Anze Kopitar. Habs fans can hope it’s not too serious.

Paul Byron: Dude skates fast. And has scored more goals than expected, while skating alongside Radulov and Galchenyuk for an extended period of time. As an added bonus, he has been improving his grasp of the French language.

Tomas Plekanec: He has not played up to expectations. Still a useful player and good on faceoffs. Only has one goal to his credit and needs to contribute more to pull his weight as the team’s highest paid forward.

Brendan Gallagher: Every single Habs fan loves Gallagher’s style of play and track record but his performance so far has been questionable. Recently ended a long drought without scoring a goal. Needs to simplify his game and go back to driving the net to be effective.

David Desharnais: Laurier-Station native is often criticized for lack of production and has been a healthy scratch at times this season. We should know better than to count out the little engine that could.

Philip Danault: Has cooled a bit after a surprising start. Looking like an absolute steal after being acquired in a trade with Blackhawks late last season for Dale “Analytics Darling” Weise.

Andrew Shaw: Brought on board for his edgy game and often provides a spark when team needs it most . Coming along after a slow start. Can lose his shit sometimes.

Torrey Mitchell: Selwyn House grad has chipped in more offence than expected. Defensive play and forechecking is his forté though.

Artturi Lehkonen: Playing well for a 20-year-old rookie in his first season overseas and whose spot on the team was not guaranteed before training camp.

Shea Weber: Came in with lofty expectations and has lived up to the hype in a big way. He’s proven his worth as a leader on this team right off the bat with 17 points on the Powerplay so far.

Andrei Markov: Russian defensemen has been with Habs since the Réjean Houle era. He still somehow finds himself among the top 10 in scoring among defensemen in the NHL.

Alexei Emelin: Has shown more consistency in his game to go along with his rambunctious style of hockey.

Nathan Beaulieu: More offence was expected from this 4th year player who had an impressive training camp. Currently injured after receiving an errant puck to the throat.

Jeff Petry: Smooth skating d-man is finally healthy after missing a large portion of last season. And it shows.

Greg Pateryn: Plays an understated game and is best when you don’t notice him on the ice. Somehow always seems to be the odd man out when Therrien wants to shake up the line-up.