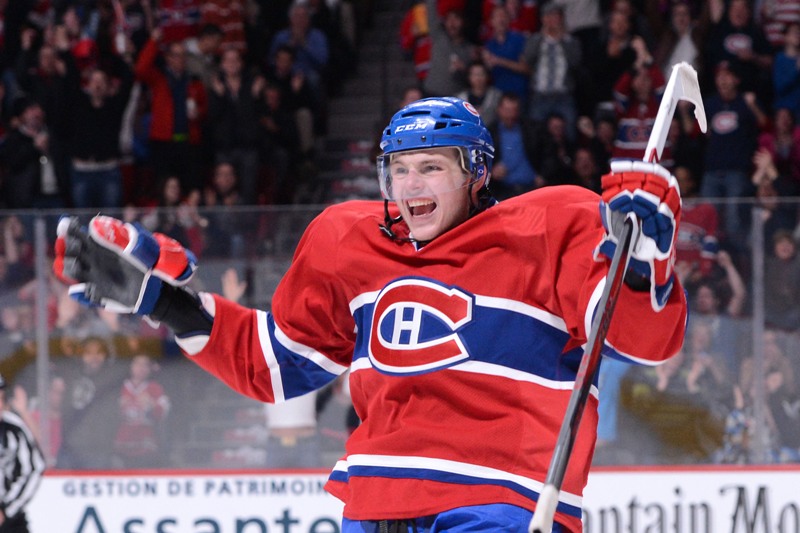 The Habs were back in the saddle last week (I’ll do it for free Wrangler!), picking up close victories vs. the likes of Toronto, Carolina and Detroit  after a tough stretch where they lost three consecutive games. The Canadiens now find themselves five games into a road trip with another 12 to go — this will be the toughest test for the team so far this season. Here’s what happened in last week’s games, in 140 characters or less:

Red Wings (W): Gallagher scored for the first time in forever. Galchenyuk connected on a beautiful pass by Radulov to win the game in OT.

The arrival of Alex Galchenyuk

It was the 2011-2012 season, the Montreal Canadiens were suffering through one of their worst seasons in recent memory. Here are some facts to put things in perspective: Randy Cunneyworth was the head coach, Pierre Gauthier was the GM, Scott Gomez was the team’s #1 centre, Carey Price was still battling with inconsistency and was a far cry from being the dominant goalie he is today. The result of that terrible season was that the Canadiens would be rewarded with a very high draft pick, due to the fact that the Canadiens had finished last in the Eastern Conference and third from last in the entire NHL.

After ownership decided that a major shake-up was in order, the core of the current management group was brought into place — Marc Bergevin and Michel Therrien — immediately following the end of that season. The first bullet point on their new mandate was to draft Alex Galchenyuk. It was unfamiliar territory for Habs fans as the team had toiled in mediocrity for the better part of two decades, usually making the playoffs with a week left in each season and, more importantly, not having access to players with Galchenyuk’s talent.

But things were not always clear-cut with Galchenyuk. The year prior to the draft, he’d suffered a serious knee injury a few games into the year with the Sarnia Sting and had missed practically all of the games in his draft-eligible season. But Bergevin was not deterred by this and made the bold decision to select him with his first pick of the 2012 draft. While the sample size to judge his performance was very small, his pedigree and competitive attitude won out in the end.

Pundits weren’t even sure what make of his nationality — Galchenyuk was born in Milwaukee, Wisconsin as his father, a native of Belarus, was carving out a hockey career in the minor leagues. This is why Galchenyuk represents the U.S. in international tournaments, despite spending the majority of his teenage years in different countries in Europe with his family. When he was showing signs of his immense potential, his father moved the family back to North America to focus on coaching and Alex was soon thrust back into the spotlight at 16. It was largely the impression he made at that young age that convinced the Habs to take a calculated risk in choosing him.

When the 2012-2013 season came around and the recent NHL lockout had ended, the Habs were faced with a difficult decision. Despite the fact that they considered sending Galchenyuk back to play junior hockey — as is the case with many teenage players (see: Sergachev, Mikhail) — they decided to keep him with the team full-time that season, with one caveat: Galchenyuk would be forced to play as a left-winger.

And so the uncertainty continued, as a player who was selected for his prowess as a centre spent most of the following three seasons as a left-winger. Fans grew impatient with seeing their future star flanking the wings instead of playing down the middle but management preached patience as his time on the ice has increased every year.

This all came to an end when Bergevin stated during a golf tourney before last season that Galchenyuk would be playing in his natural position for the foreseeable future, leading to his start in that role for the first half of the season — but this move didn’t pan out at the time. Personal issues arose as Galchenyuk was involved in an incident with his ex-girlfriend going full crae bae and leaving him with a bloody nose in a domestic dispute. He appeared on camera soon after and apologized for being a “distraction.”

After briefly being forced back to LW, he was moved back to centre where he ended the season on a tear, finishing with his first 30-goal season and finally appearing at ease in his natural position.

Which brings us to this season, where Galchenyuk has been the leader on offence and, on many nights, the Habs’ best player on the ice. He’s scored at least one point in 17 out of the 22 games the team has played, developing great chemistry with a player of a rather similar background, Alex Radulov — they’ve complemented each other quite well on the ice. This was very evident on Saturday night as they connected on a beautiful setup to win the game in overtime. While Galchenyuk’s path has not been clear-cut, his recent performance, dating back to the final quarter of last season, led us to believe that his time as a team leader has arrived. For someone who’s played through uncertainty and displayed a positive attitude in early tenure with the team, it appears as though the stars have aligned for him to finally make his mark on his own terms, as Bergevin and Habs fans hoped he would on draft day in 2012. ■