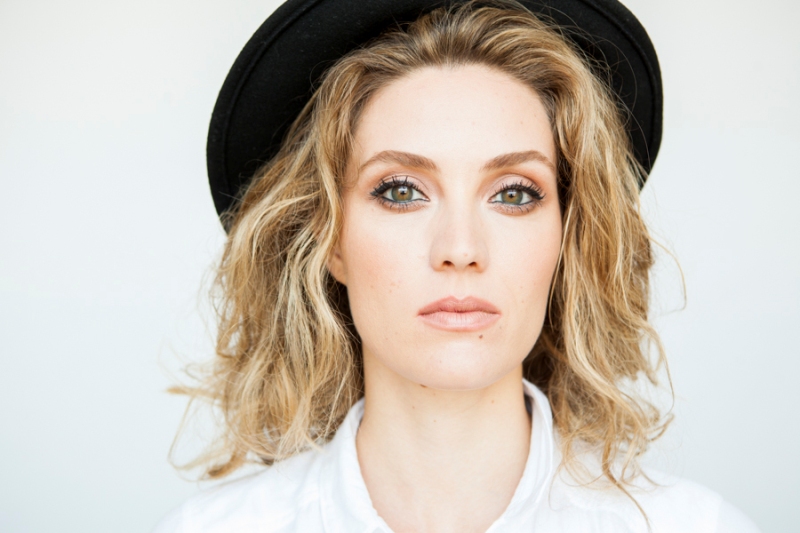 Most actors have a breakout role. Even if it isn’t necessarily their best work, it bisects their career between “the struggle” and “the career.” More simply put, it’s the role that people recognize them on the street for. Évelyne Brochu doesn’t really have that — while she’s probably best known (and best-loved on the Internet) for her role as Delphine on the cult sci-fi show Orphan Black, where you recognize Brochu from says a lot about your own personal media consumption. Since graduating from the Conservatoire in 2005, she’s worked with top-shelf filmmakers like Xavier Dolan, David Cronenberg, Denis Villeneuve, Jean-Marc Vallée and Sophie Deraspe; she’s been on TV and on stage regularly and won a Prix Gémaux for her role in the téléroman La promesse.

Still, it’s likely the fanaticism of Orphan Black fans that’s boosted her profile. Like many Montreal actors, Brochu’s most visible role outside of Quebec came in the form of science-fiction television — and with it a vocal, loving audience if we’ve ever seen one. “I think it’s a phenomenon that happens a lot in science-fiction — the audience is extremely faithful,” explains Brochu. “We have a great fan base! It’s a show with progressive values that has eight female leading characters, all played by the same actress. I just think it’s wonderful. People who love that show really love it.

“People are starting to recognize me from the show. I went to London recently and someone recognized me, which had never happened in London before. Over here, it’s mostly anglophones — I’m not sure if the translated series has started airing here yet. Unfortunately, they didn’t let me dub my own voice!” she laughs.

With increased online popularity comes an increased social media presence; along with topping the Hottest Woman and Best Actress categories in the Best of MTL readers poll, Brochu’s Twitter and Instagram accounts also ranked very high in their respective categories.

“I’m both sort of happy and uncomfortable with the idea of social media,” says Brochu. “As much as it brings people together and breeds familiarity, it’s also an anonymous place, and when people have anonymity, they allow themselves more. Social media isn’t a totally safe space and I think it’s important as an actress to cultivate a certain level of mystery. As an actress, you want people to be able to project onto you; I think that the less they know about me, the better. Then again, we’re doing this interview, but Montreal is one of my greatest loves, one of my greatest passions since the beginning. (…) I think we’re extremely lucky — we’re in a very special place in the world. I’m always happy to talk about it.”

Splitting her time now between Montreal and Budapest (where she films CBC’s X Company about four months a year), Brochu has ended up spending a lot of time in the city that she loves at the time of year that people love the least. “Just when I thought I’d earned my summer, I went off to shoot a movie in British Columbia,” she laughs. “I think that because of the winter, Montreal will never be 100 per cent the perfect city. This big shitty winter protects us! I had a French friend who came here to write and he thought it was really poetic; I guess it depends on each person’s constitution. There is something about the winter that forces us into intimacy — it’s like Barcelona in the summer and Norway in the winter, which brings people together.”

“Doors have opened and I walked through them, but my goal was never to shut them behind me afterwards,” she says when asked about the international growth of her career. “I still have upcoming Quebec projects in film and TV. Montreal will always be home, but my goal is to work with interesting people. I’ve made that choice — for now, the back and forth suits me and the work adds value to all of the travelling and the people I meet during the travels. (…) We choose the place we live like we choose our friends and our lovers — I’m lucky that my favourite city in the world is the one I was born in!”

“The coffee is really good! It’s my neighborhood spot where I come to read or learn my lines.”

“The employees there really know literature and they give great suggestions. You can go up to them with an author or a genre in mind and they’ll give you incredible suggestions. They’re brilliant people! I also love the way it’s laid out thematically — something happens in the news and the next day there’s a full table of books on that topic.”

“Tamey’s a classic! I don’t think she ever sleeps. She also builds bouquets like some people read palms. You can go up to her and say you’re going to someone’s birthday party, you can give minimal information about the person and she’ll make the perfect bouquet for that specific person. A week later, you can come back and just say it’s for your uncle and she’ll build something that’s both completely different and completely suited to the person. It’s like she can read flowers!”

“People often ask me where I get my hair done. I’m not necessarily a fan of doing ‘beauty tips’ type stuff, but I’ve been going there for at least eight years. It’s the kind of thing you grow to miss when you’re not home, this type of network: the place for hair, the place for dry cleaning, and so on.”

“I haven’t seen him in a while, but there’s this guy who used to play hard rock out of his convertible and he’d drum on his steering wheel — I guess he drove with his knees? Maybe I hallucinated him! Maybe he’s an apparition from the rock ’n’ roll period of my early 20s. On Sundays, he’d do up and down on Mont-Royal and on Fridays, up and down St-Laurent… Maybe your readers can confirm?!”

“I’ll have to admit that there’ll always be a place in my heart for the bar of my youth, Bifteck. I haven’t been in a while, but every time I walk by I flash back to my early twenties. I see myself at a table drinking a pitcher. (…) I remember the big Black Label poster on the second floor; I think I even spent a New Year’s Eve dancing there. It was grungy!”

“I went to see my cousin Xarah Dion play last week and I lost my mind. She’s about to go on a big tour of Europe — my goal is to be in Budapest at the same time her tour stops there! I think she’s so great — I always knew she was talented but now it’s above and beyond.” ■