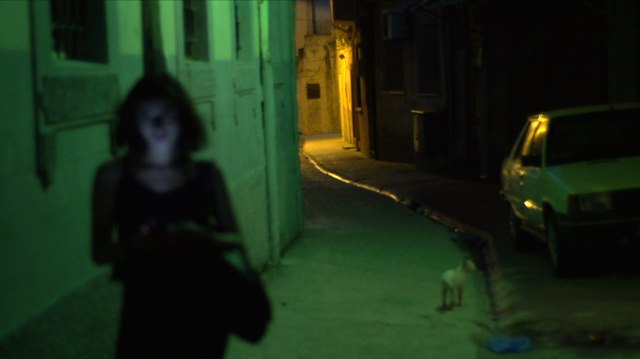 The toughest thing about writing a piece about The Amina Profile is deciding exactly how much to reveal. Director Sophie Deraspe has structured her documentary like a mystery, but the facts of the case aren’t very hard to find. The Amina story made international news in 2011, and you can easily go to Wikipedia and read all about it. It doesn’t contain Dear Zachary-like bombshells, but there’s a mystery to The Amina Profile that’s best appreciated totally blind. I spoke with Deraspe and Sandra Bagaria, the film’s subject, about the challenges of making The Amina Profile.

In the throes of the Syrian Revolution in 2011, a Montrealer named Sandra Bagaria befriended a woman named Amina Abdallah Arraf al Omari online. Amina claimed to be a gay Syrian woman on her blog A Gay Girl in Damascus, which chronicled her daily life in the Syrian capital. Bagaria and Amina embarked on somewhat of a romantic relationship, bound together by a real kinship but separated by thousands of miles geographically. When Amina’s family claims that she has been kidnapped, Bagaria becomes so concerned with her well-being that she begins to dig for more info, revealing that Amina may not be who she says she is.

Deraspe and Bagaria were already acquaintances before the events of the film; their relationship and the media attention originally given to the story led to the germination of the film. “Making the movie really did bring us closer together, but at the time we were in the same group of friends. We weren’t very close friends, but I knew Sandra had met someone online, someone who revealed herself over time to be very interesting, politicized, courageous… This was before she even started the blog. We’d talk about world events with friends and Amina became a very interesting person to us in the way that she really took an active part in her own world,” explains Deraspe. “On the other hand, if she had just been a girl from Trois-Rivières…”

It was really the socio-political aspect of Sandra’s relationship with Amina that appealed to Deraspe. “Movies about online relationships that aren’t quite what they seem have already been done,” she says, citing Catfish as an obvious example. “In this case, there were really important stakes that went beyond fiction. It didn’t just have to do with the Internet — it encompassed all media as a whole. (…) It’s crazy how this story assembled so many smart, educated, tuned-in people with a thirst for the truth.”

I ask Bagaria if the film is difficult for her to watch now, a few years removed from the events depicted. “The only part that I find unpleasant is the more intimate stuff, but the rest of the film… I’ve seen it about six times now, and every time I rediscover something because my emotions have changed each time. I think I’ve gotten closer to Earth now and I can assimilate the facts better. All of the intimate parts, though… I could see it 40 times and never really get over it,” she says.

One of the great challenges of bringing the story of Amina to life is a thoroughly modern one. It happened almost exclusively online; the only visual trappings of Sandra and Amina’s relationship are Facebook messages. Desrape frames those conversations over artfully constructed montages of women dressing and undressing in traditional Muslim garb. “I actually asked myself ‘What am I going to film?’,” says Deraspe. “It all happened online and it’s already happened. When Sandra presented me her archives — which I accepted like one accepts a precious gift — she told me, ‘I hope you can do something with this.’(…) What I wanted to do was put images to a fantasy. I didn’t necessarily want to recreate specific events or a fantasy described by Amina, but I took inspiration from Middle Eastern imagery and the idea of feminine eroticism in the Middle East to craft those images.”

I asked Bagaria what she thinks of the final product of The Amina Profile, as its chief subject. “It could’ve started off on the wrong foot, but it didn’t,” she says. “Sophie understood how this story needed to be told and what could be left out. I often say that the film’s strength is the balance it strikes between everything. (…) It’s very representative of what I lived, and of all the emotional levels that I went through living it.” ■

The Amina Profile opens in theatres on April 11. Watch the trailer here: