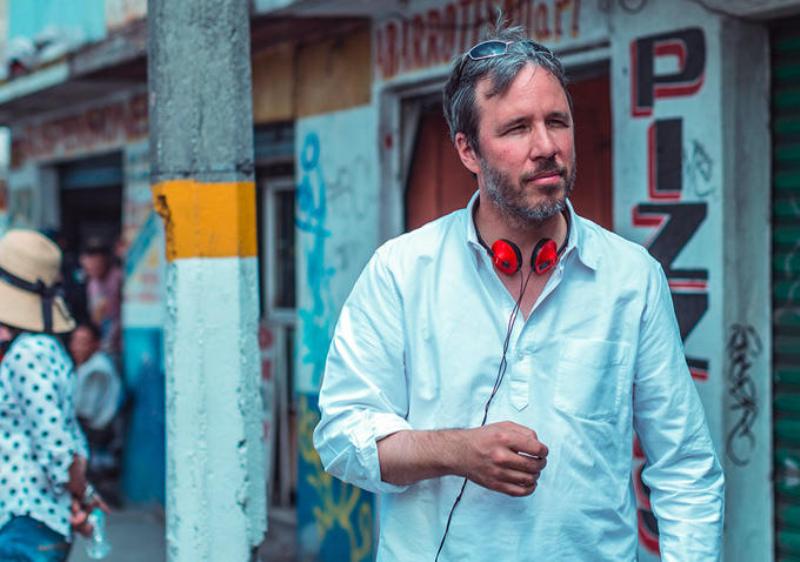 Denis Villeneuve during the filming of Sicario

Denis Villeneuve is a busy guy – busier than even his steady ascension up the Hollywood A-list may suggest. Since wrapping Sicario, he’s made another film (the sci-fi Story of Your Life, starring Amy Adams and Jeremy Renner) and been hard at work preparing the most ambitious film of his career – a Blade Runner sequel (though Villeneuve presents it as a film set in the Blade Runner universe) that will reportedly team up original star Harrison Ford with Ryan Gosling. All those projects have to be put on the backburner for now as Villeneuve prepares for the release of Sicario, his cartel thriller that officially opened in competition at Cannes before popping up at TIFF two weeks before the Montreal premiere. It’s been nothing but interviews for Villeneuve, who admits that they’re no one’s favourite part of the job.

“Doing a press tour is one of the most exhausting things. I just came back from Europe,” explains Villeneuve at the Montreal red carpet premiere of his film at the Quartier Latin. “Doing one interview after the other and being as present and focused for each one is hard. Honestly, it’s an extreme sport these days, with the multiplication of media outlets. Years ago when a film opened in Quebec, you spoke to five or six newspapers – now you guys are 22, 32 outlets… It’s not a bad thing, but I have to admit feeding that beast is a little intense! I’d still say it’s a privilege, though. When people are interested in what you do, that’s a privilege!”

Sicario is Villeneuve’s third American film after Enemy and Prisoners. All of those films share a certain bleak sensibility and moral darkness that you’ll also find in Villeneuve’s last two Quebec efforts, Incendies and Polytechnique. It’s no stretch to say that the director is drawn to bleak material. “I think the film I made is even darker than the script as written,” he says. “The film has a greater moral ambiguity, and has a generally bleaker outlook. When I adapt a screenplay into images, it’s no different than adapting a book or a play. To be honest, I try to make it mine. I try to be the screenwriter’s best friend by protecting their poetry and their ideas but there will necessarily be a pretty harsh process of transforming their words into my images. Images can be made stronger, unnecessary dialogue can be dropped, I might go into scenes more deeply or more perfunctorily… I think if you give any script to any director, every film will be vastly different. In my case, I went darker.”

Part of what makes Sicario work is Emily Blunt’s performance as Kate Macer, which requires her to be strong-willed enough to be believable as a top FBI field agent but also vulnerable enough to convey the hopelessness and confusion that she spends much of the film in. “I insisted on having Emily Blunt in the part,” Villeneuve explains. “It was important for me to get Emily because, first of all, she’s an excellent actress. She has an inner strength but is also very vulnerable. It was important for me to depict a strong woman, but not a strong woman who could also be a strong man. I didn’t want her to simply be an action hero — I wanted her to keep her femininity while remaining a strong presence on-screen. It’s something we don’t see much of in movies; we’d seen it in Silence of the Lambs with Jodie Foster, and that’s the direction I wanted to take her character as well.”

“I think it was certainly kind of a gamble to follow the story through the eyes of a character that slowly disintegrates,” he continues. “She loses her sense of moral conviction, she loses her strength on screen… And then, at the very end, she has an important choice to make. The last time we see her on screen, she does something that helps her get her values back. For me, the film is all about this temptation to use her strength in a different way.”

Sicario is Villeneuve’s largest-scale film yet. In fact, looking through his filmography, you sense a certain expansion of scale with each successive project, which is certainly corroborated by the fact that his next two films are an epic space-invasion film and a sequel to one of the most influential science-fiction films of all time. “I learn something new on each film. Yes, the complexity of the film increases with each project. I’m unable to work in the same zone each time. It’s like someone exercising – you do 15 pushups the first time, the next time you go for 20. I know it’s not very many — I’m not very athletic! On each film I want to up the difficulty level. I see it as a way of evolving and of acquiring new skills as a filmmaker. Story of Your Life was MUCH more complicated than Sicario, and the next one will be an immense challenge. I do believe that I set it up so that the distance between each step isn’t too huge. But I know that the projects I choose are films I can pull off.” ■

Sicario is in theatres now. See our review and the film trailer here.

It’s incredible how many shows are sold out these days, but there are still plenty of great gigs to get into.