On day one of Burger Week 2015 (Sept. 1), five Cult MTL reporters went out into the field to try seven limited edition creations. Yes, two us ate two of these monstrosities in one day, but only one of us regretted it.

The success or failure of a veggie burger lies mostly in the patty — it doesn’t need to duplicate the texture of a ground-meat patty, but it needs to be moist and taste like something, preferably something good.

The Pretender not only had a hearty, succulent lentil, vegetable and panko patty at its centre, it also came with a pretty perfect brioche bun and condiments that enhanced it: cheddar on the patty, sautéed sweet onions, a pickled green tomato slice, cornmeal popcorn cauliflower, arugula and iceberg lettuce, dijon and Sriracha mayo and a lime-infused avocado spread.

Monsieur is a pretty cute two-year-old restaurant, the sister business of the sandwich shop and caterer next door (Miss Prêt à Manger), with black and white striped walls and brassy ceiling fixtures suggesting an industrial/Tim Burton aesthetic, in the neatest and tidiest possible way. Burger Week was was a great opportunity to check out this spot, and I’ll be back to try their regular fare. (Note that the Pretender is a regular menu item.) (Lorraine Carpenter) 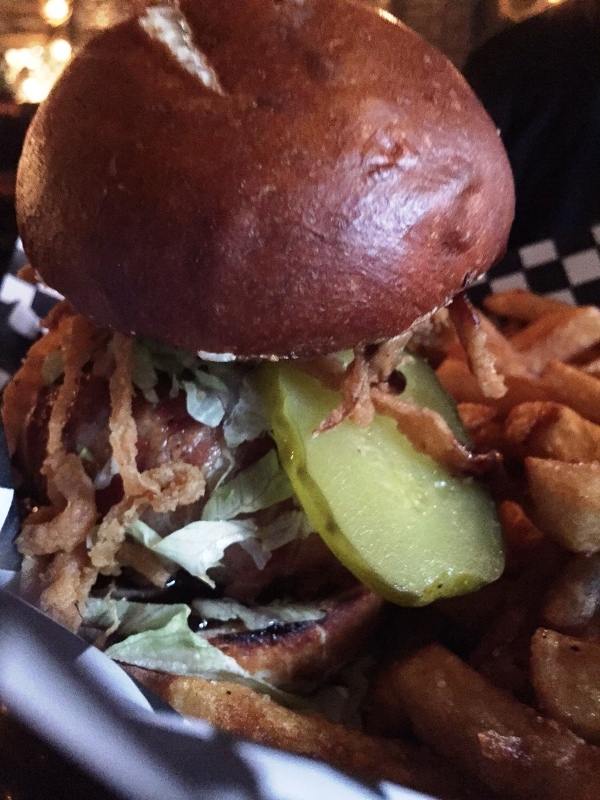 I’ll admit that I’ve enjoyed making fun of Brutus Bar in the past, both for their relentless pre-opening ad campaign and their trendy bacon-heavy menu, but I’d actually never been. Burger Week is, to me, all about extravagance and potentially dodgy decisions, and I have to admit that getting a limited edition burger from a place that offers a 100 per cent bacon hotdog seems like the “right way” to do Burger Week.

The 6 Pack is a fully-loaded burger whose chief defining characteristic is that the beef patty is stuffed with cheese curds and comes wrapped in six slices of Brutus’s omnipresent bacon. As decadent as that sounds, the burger is a manageable size and relatively easy to manoeuvre. It comes dressed with pickles, fried onions, lettuce and a pretty good homemade BBQ sauce that’s more on the Southern BBQ side of things rather than the sweet, syrupy storebought stuff. The dense onion roll is perfect to hold all the stuff in there, though I’ll have to admit that the cheese curds are either in short supply or pretty much melt directly into the meat because they’re almost imperceptible.

At $16 (including fries), the 6 Pack seemed a tad expensive, but then again I had a sizeable lunch because I’m bad at planning ahead, and my visit to Brutus left me more than passably stuffed. It’s not as extravagant as I’d feared, but it’s still six slices of bacon in a burger — a pretty good one.(Alex Rose) 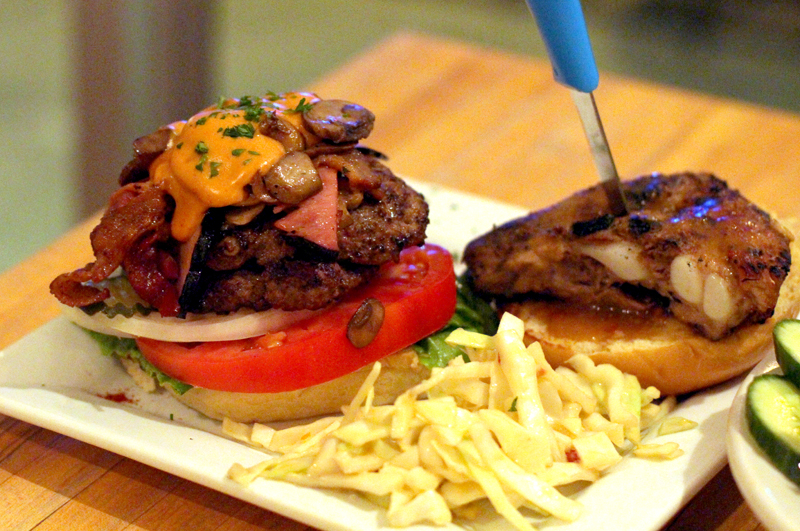 Piled high with two quarter-pound patties, bacon, black forest ham AND a burger-sized rack of baby back ribs, ART:brgr’s Burger Week creation was given an open-faced presentation by necessity, leaving no limit to the amount of special, tangy cheese sauce that was generously allocated to the top of this meat mountain. The meats were all perfectly tender and juicy and delicious, each with distinct enough flavours to stand apart from each other. Garlicky sautéed mushrooms and a super thick slice of fresh tomato with greens gave a bit of balance to the tower of protein. If you want to delude yourself into thinking you can turn this into a healthy meal, do as I did and order a $5 green salad on the side.

The real standout for me was the cheese sauce, which was thick and gooey and bursting with flavour. While four meats on one burger is obviously completely superfluous and exists for no other reason than to create the most over-the-top burger possible just for fun, it did the trick to get me in the door, and now that I’ve sampled the goods at this Plateau hangout, complete with pool tables, early rock ‘n’ roll on the stereo and a large outdoor terrasse, I’ll definitely be back again to try more from their extensive menu. (Lisa Sproull) 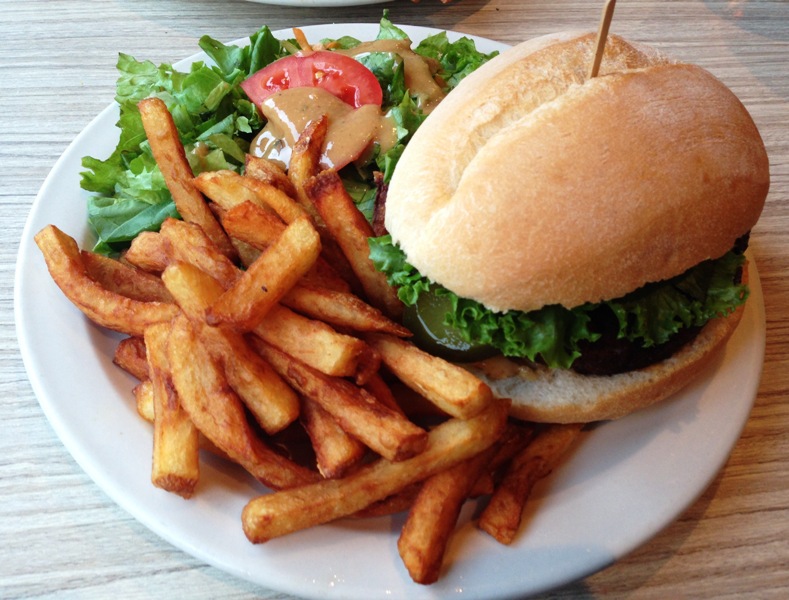 I’ve always been a fan of la Cabane’s Portuguese style cuisine, and hoped that they’d continue the trend in burger form, which they pretty much did — the patty was made with minced beef and chorizo, stuffed with Saint Jorge cheese, mushrooms and onions and topped with Piri-Piri mayo, pickles, lettuce and tomatoes. The Portuguese bun is an excellent choice of burger bun, especially in combination with the Portuguese-style burger — you can really taste the chorizo and spices most common in Little Portugal restaurants on St-Laurent. I felt that the mushrooms, cheese and onions would have worked better as toppings than within the patty, and wanted more of those flavors. But I did appreciate that they kept to the traditional burger staples of tomato, lettuce and a pickle during this week of designer burgers. (Cindy Lopez) 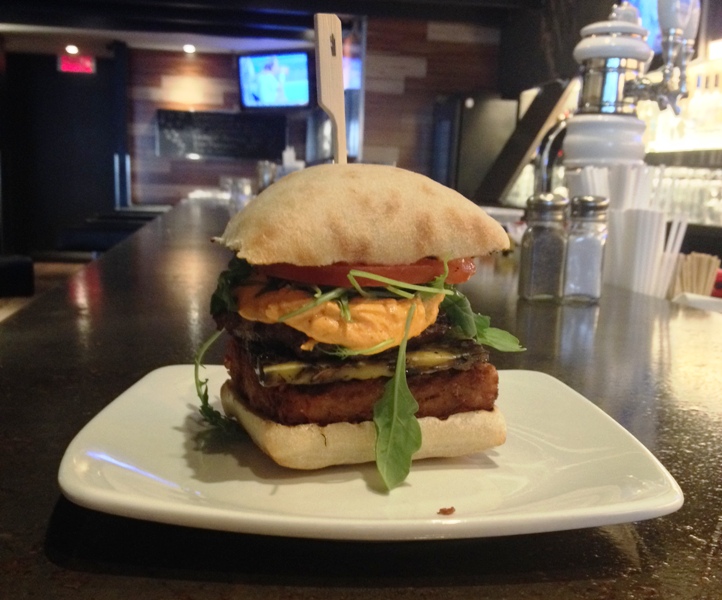 It’s nice to see a joint offering up textural variety that goes against the grain of conventional burgery this week. Some like their burgers sopping wet, but others will take it bone dry, so take heed that M:BRGR’s Anna Roma leans toward the latter. While its modest AAA beef patty, fried porcini mushrooms and sliced tomato gives some juice to each bite, it’s layered between ingredients that sop it up, from a soft hash-brown-style potato pancake and fluffy mushroom frittata to its pleasingly tangy roasted red pepper goat cheese sauce. All of this is squashed within a ciabatta bun, which isn’t always the first bread choice for burger scaffolding. Even its sprinkled arugula’s taste of nuts and mustard add to the parched texture.

This is by no means a shortcoming however, as you’ll still come away licking your fingers. Just don’t expect to be hoarding the tableside napkins to wipe away pooled grease. Each bite’s airy and flavourful, and the burger’s elegantly assembled into a cubic shape that’ll make your pinky fingers jut out when you grab hold for a bite. What’s more, it certainly doesn’t hurt to try a modestly priced option from a place that’s known for its lavish, $100 everything-on-it-and-then-some option. (JP Karwacki) 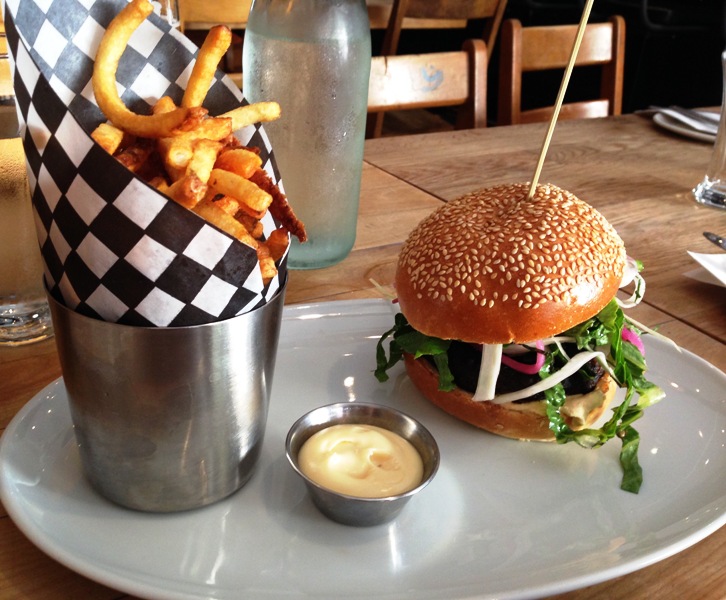 Outremont restaurant les Enfants Terribles has taken a Mediterranean approach to Burger Week with a lamb burger, topped with labneh, harissa mayonnaise, fennel and mint. This combination of exotic flavours really complemented a unique burger meat — the creaminess of the labneh, the seasoning of both the patty and the mayonnaise and the lightness and freshness of the ingredients were great. I wished that the bun reflected the Mediterranean theme more than the standard traditional burger bun. (CL) 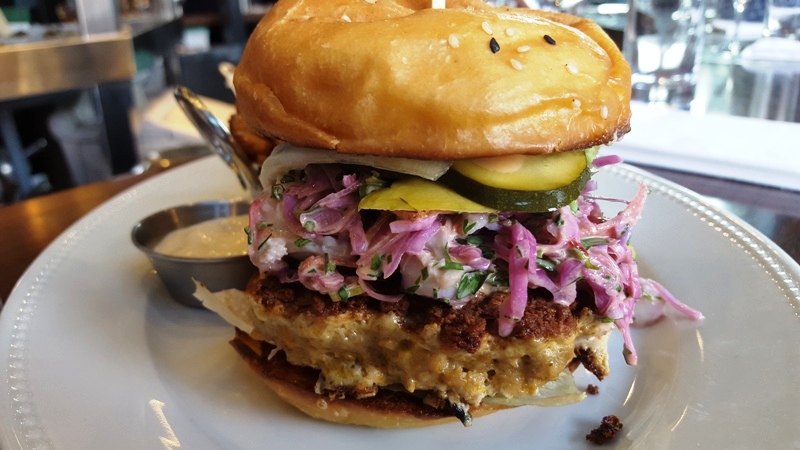 As a pescetarian, I know a little something about fish burgers. I’ve had my share, from the store-bought PC type to the famous filet of the Golden Arches to the occasional higher end varieties at respectable restaurants. Notkins is a ritzy, ultra-modern seafood restaurant near Chinatown, so I was looking forward to their upscale Burger Week entry, a sturgeon patty with lobster slaw. Unfortunately, it was a disappointment.

Granted, having just eaten another, pretty substantial burger right across the street, I could’ve gone in hungrier. Even then, I don’t know that this fish patty would’ve been any more appetizing — it was just too fishy. I appreciate the fact that the fish was probably caught somewhere in this region and ground up in the Notkins kitchen, but either the fish could’ve been fresher or the choice could’ve been made to use fewer, less skanky parts.

After a few bites, I opened up the burger and began eating the condiments:lobster and red cabbage, which was pretty great, and pickled zucchini, which was on the sweet side (suggesting tartar sauce by way of relish, I guess), reminding me of the sweet pickles that I generally avoid. (Really, does anyone like sweet pickles?)

If I ever end up at Notkins again, I’ll order oysters, their specialty. Maybe after having another Pretender burger across the street. (LC)