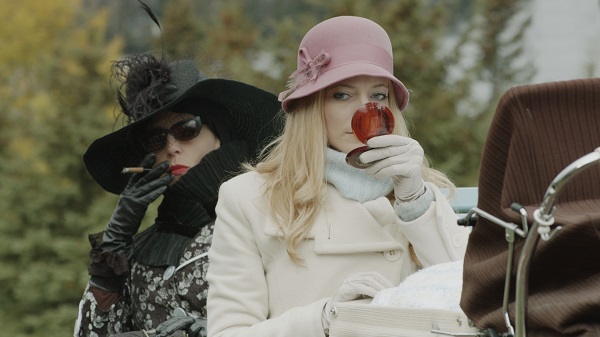 If you have any interest in the Montreal film scene (and if you’re reading this it’s safe to assume that you do), you’ve probably heard of Patricia Chica. The Salvadorian TV and film director has been making waves with her independent films, joining the ranks of other Montreal filmmakers that have been earning worldwide recognition and success.

Chica’s latest film, a short called Serpent’s Lullaby, is a contemporary re-imagining of the myth of Medusa, which she’ll be launching this evening at Café Cleopatra. The venue is the perfect setting, given the production’s close ties to Montreal’s fetish community. Jenimay Walker, who plays Medusa, and Richard Cardinal, who plays her lover, are both fetish performers who have acted in Chica’s previous film, Ceramic Tango. And Badazz Films, which produced the movie, is presided over by Cardinal, and many of the film’s backers are known figures from the community.

The film tells the story of a mysterious woman who lives in a secluded mansion in a picturesque mountain town. The tranquility of the scenery does not last for long as we are introduced to this woman’s awful curse: she accidentally and tragically casts her gaze upon her baby, turning it to stone.

This is the affliction our modern-day Medusa must live with. But far from the mythical creature from Greek antiquity, Jenimay Walker’s rendition is not just a monster, not just an obstacle in the way of a fearless hero with a sharp blade and a handy mirror — here, Medusa wants nothing more than to love. And the closest she ever comes to it is a stone statue of a debonair gentleman frozen for eternity near the doorstep of the mansion, a diamond engagement ring held in his fingers, still sparkling as if to taunt Medusa with the life she could have had.

To fill her emptiness, Medusa seeks a child and the way she chooses to obtain this child is villainous indeed, but you cannot help but sympathize with a character that is both human enough to thirst for love, yet too monstrous to ever be able to truly receive it.

Chica’s previous film, Ceramic Tango, won awards at film festivals around the world, including a first prize win at Hollywood Shockfest. The success of that film garnered Chica international attention and she is now a filmmaker in high demand.

Serpent’s Lullaby shares many similarities with its predecessor: disturbing imagery, sparse dialogue, brief flashbacks and a light plot that leads to a cathartic ending. But this time around, the atmosphere is much more developed, with colour and imagery akin to watching a living painting.

Regardless, it is still an enchanting short film. It is like a dark fairy tale, both grim and morbid, but also bewitching and beautiful to behold.

Patricia Chica will be travelling to the Cannes film festival with this film, as well as others in her repertoire. She has also signed on to direct two feature-length Hollywood films with the L.A.-based Blanc Biehn Productions, which is helmed by actors turned producers Michael Biehn (Terminator, Aliens, The Rock) and Jennifer Blanc (The Crow, Cool and the Crazy). ■

You can check out Serpent’s Lullaby at the launch and pre-premiere (with cast and crew present), tonight at Café Cleopatra (1230 St-Laurent), 8 p.m., $10 in advance/$15 at the door