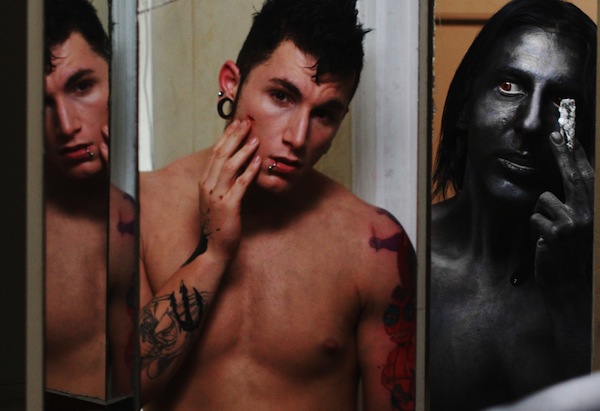 Award-winning Montreal director Patricia Chica’s new short film Ceramic Tango, having its local premiere this week, is a labour of love infused with the purpose of making a younger generation aware of HIV.

Chica decided to direct the film, written by Torontonian Charles Hall, due to its exploration of the darker side of the human experience. Says Chica, “As I was turning the pages, I was thinking of a friend of mine, an actor who played in my first short, The Promise, who died of AIDS, and I thought that this story had found me to be told to the world.

“I strongly believe in the purpose of this film. It is my mission in life to tell stories that would be otherwise disregarded. I also believed in using acting as an empowering device for the two lead actors, Holy Scar and Richard Cardinal.”

Both actors, who are stage performers in the fetish world, had no experience in dramatic acting prior to the film and were trained for two months before production. “I believed in their potential and in return, they completely trusted my vision and guidance,” says Chica. “I knew that this film would be more than just an artistic project for them, but a tool that would help them deal with and resolve some personal issues related to their past; that it would become a journey into self-discovery and empowerment thanks to self-expression. I knew that the process of learning how to act would make a difference in their lives. I’m so proud of their achievement. I constantly challenge myself that way.”

Chica also challenged herself financially, beginning production before acquiring all the necessary funding. But she states that despite these struggles, her passionate team and the dedication of sponsors, cast, crew and others allowed it to be successful. “With this film, I feel that I’m going beyond all my expectations by reinventing my narrative style, and exploring the fantasy world, which is a new genre on my slate. This project definitely has my stamp on it, and it also fulfilled my mission for telling stories with a purpose.”

The film has already gained the attention of international festivals, being programmed at the Short Film Corner at Cannes and the Rhode Island International Film Festival, just to name a notable few.

Friday’s screening will not only include the 10-minute short followed by a Q&A with the cast and director, but also a burlesque show, a cabaret-style fetish celebration and a presentation of the 30-minute Laura Antohi documentary Let It Out!which documents actors Richard Cardinal and Holy Scar’s journey into the world of acting. ■

Ceramic Tango screens at Cabaret Cléopatra (1230 St-Laurent, 2nd floor) on Friday May 3, 8 p.m., $10 (10 per cent of the funds raised will go to the Quebec Aids Foundation). Patricia Chica as well as actors Richard Cardinal and Holy Scar will be in attendance. Suggested attire: dress to impress, fetish or all black.