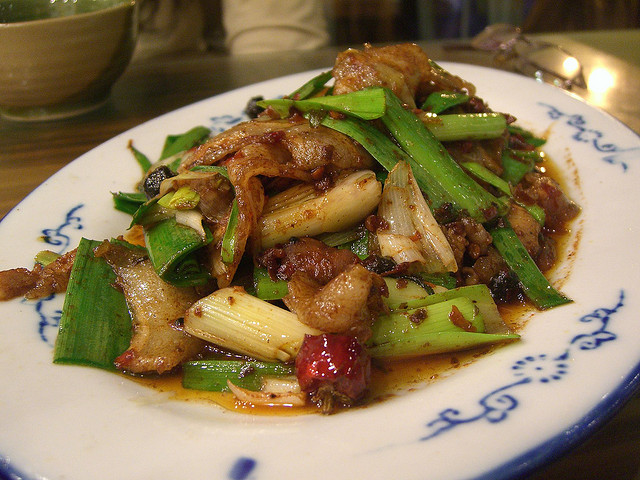 Chez Chili, a six-month-old Chinatown establishment, was tricky to find. The address listed on the interwebs was 1050 Clark. I found a door on Clark with the number 1050, but it was locked and there was a pile of detritus behind it — not too inviting. I walked up and down Clark thinking that maybe the address had been listed incorrectly but I saw no sign of a Chez Chili.

On my third, confused pass, my eye happened to catch a large, pointy chili pepper mounted next to a door on de la Gauchetière Street, several metres away from Clark. I approached the pepper and then finally noticed the Chez Chili sign, recessed a good foot behind the glass storefront, as if to make sure you can’t see it from an angle greater than five degrees. Each one of my dinner companions, each of whom arrived separately, was similarly stumped.

The restaurant turned out to be in the basement, in a large, brightly lit, fairly nondescript room. The relatively compact menu (for a Chinese restaurant) was divided into three sections, each proposing about 30 dishes from a particular regional cuisine.

The represented cuisines are those of Hunan, Sichuan and Dongbei. Interestingly, none of these three regions are contiguous. The first two are provinces of south-central China that are somewhat close together, geographically and gastronomically speaking. Though each operates in a distinct flavour spectrum, both are known for their abundant use of chilies, and so I can see why they would be represented at a restaurant called Chez Chili.

The inclusion of the Dongbei section is a bit of mystery, however. Formerly known to westerners as Manchuria, it is the northeastern region of China, made up of the provinces of Liaoning, Jilin and Heilongjiang. Its cuisine isn’t exactly known for using chilies or being particularly spicy. The relationship of Dongbei cuisine to Sichuan and Hunan cuisine is akin to that of Scandinavian cuisine to Mediterranean cuisine. My guess is that the owners hail from the northeast of China but wanted to do Sichuan and Hunan cuisine, which have apparently become popular across China, much in the same way that Southern U.S. food is popular across this continent.

My dinner companions and I focused mostly on the Hunan and Sichuan sections. From Hunan, we selected spicy lamb with onions ($14) and a straw mushroom casserole ($13). The former, composed of tender, moist strips of lamb flavoured with cumin and onion with a powerful peppery bite, was truly delicious — a hit with everyone around the table. The mushroom dish, which was served in a heated metal bowl, something like the lovechild of a fondue pot and wok, contained a nice mound of the stringy fungus layered with thin slices of pork belly and was swimming in a rich, meaty broth. The flavour improved as the broth simmered over time at our table, and was infused with more straw mushroom flavour. The straw mushrooms themselves were rather fibrous and chewy — though tasty, their texture might be a turn-off for some.

From the Sichuan zone, we selected a few classics. The twice-cooked pork ($13), a dish made of sliced pork belly stir-fried with peppers and coated in a tangy, oily sauce — a personal favourite — was decent, but not the best I’ve had. The pork belly slices were a little thick for my taste and were a bit chewy. This might indicate that the belly wasn’t boiled long enough (first cooking) before being stir-fried (second cooking). The fried green beans ($11), with ground pork and chili peppers, were good, but also not the best I’ve had. Their skin seemed a little bit tough; they probably weren’t the best quality beans. I don’t blame the restaurant — March isn’t exactly known for being the top green bean season.

We ordered a dish called crispy chicken ($13), which was quite unlike dishes of the same name I’ve had elsewhere. This one was basically a thin, chicken breast schnitzel cut into wide strips and sprinkled with a flaky garnish, slightly tangy and spicy. The flavour was rather tame compared to the other dishes, but the texture was very nice. The breading was perfectly golden and crispy, with zero oiliness, and the chicken was pleasingly moist.

Chez Chili’s crispy chicken could be easily confused with its spicy chicken ($13) — a dish of bony chicken knuckles, deep-fried without breading, flavoured with an abundance of dried chilies and numbing Sichuan peppercorns. What is potentially confusing is that other restaurants, such as nearby Niukee, call this dish crispy chicken. Nomenclature aside, Chez Chili’s version was excellent: crunchy, assertively spicy, with just enough Sichuan pepper to give your mouth a little buzz.

The only dish we took from the Dongbei section was noodles with pickled cabbage ($10). It was a bit of disappointment. The thick, transparent noodles had an amusing texture but the shreds of barely-sour cabbage failed to animate the dish. It truly did not fit in with the rest of the food we had.

All in all, Chez Chili is very promising. I will definitely be going back for the spicy lamb dish, and I look forward to further exploring the menu, especially the Hunan and Sichuan sections.

Chez Chili
1050B Clark (entrance on de la Gauchetière)
(514) 904-1766
Booze: Yes
Vegetarian friendly: Only if you consider pork a vegetable
Wheelchair accessible: No; steep flight of stairs to the basement