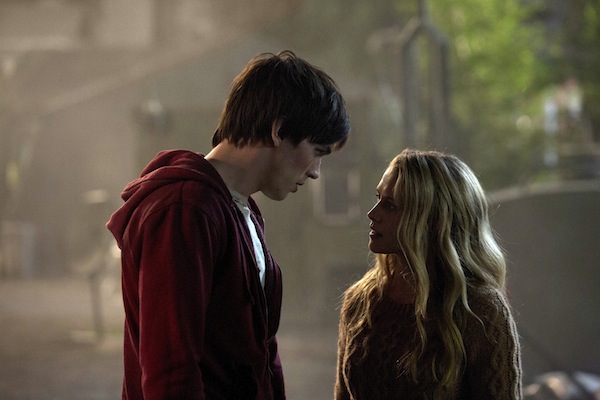 In a historical first, our series on Montreal-shot films focuses on a brand new release, zombie rom-com Warm Bodies.

Does Montreal play itself?: Maybe. While it is never explicitly said what city the film is set in, no effort has been made to hide the fact that the city is Montreal. No one speaks French, so I have to assume that the franco population was turned into zombies first, and the fortified city walls are between McGill (to the north) and the Bonaventure highway (to the south), so it’s safe to say that most of Cult MTL’s readership is also zombified.

Notable local talent: There are surprisingly few speaking roles in the film. The vast majority of local actors play zombies shuffling about and moaning; I’d be hard-pressed to single anyone out. Everyone does a fine job shuffling and moaning, for what it’s worth.

Most egregious local landmark: Which one doesn’t show up? This is the Made in MTL entry with the most varied landscape yet: the Turcot exchange, the Farine Five Roses sign, the CIBC building (as spotted last month in Swindle) and the lookout on top of Mount Royal all make an appearance. But the most egregious is the Olympic Stadium, playing itself as a deserted and decrepit eyesore that’s the setting of the film’s final action setpiece.

You can’t blame the studio for pitching Warm Bodies in ads as a zombified version of Twilight; who wouldn’t want to get a slice of the coveted hormonal-tween/embarrassed-grownup market? Honestly, the idea of a romance between a zombie and a human, and the world that just doesn’t understand their love, makes me want to bash my own brains in with a rock; it’s the kind of insufferably twee free-association that probably shouldn’t leave the confines of a sketchbook. Consequently, Warm Bodies walks a razor-thin line between being genuinely entertaining and unbearably, poisonously cheesy. It’s also miles away from Twilight.

R (Nicholas Hoult) is a zombie; although his conscience is intact, he can do little else than shuffle around, grunt and eat brains. It’s on an excursion for the latter that he meets Julie (Teresa Palmer), the still-living daughter of the leader of the human resistance (John Malkovich). While killing and eating her friends and boyfriend (Dave Franco), R falls as madly in love with Julie as a hunk of rotting flesh possibly could. He whisks her away to his abandoned-plane apartment to protect her and perhaps seduce her, despite the fact that he can barely speak and is not, you know, technically alive. As you may have guessed, Julie warms up to R’s peculiar brand of affection and brain-chomping.

Warm Bodies has trouble reconciling its snarky, genre-bending side with its more cockle-warming instincts; it often plays like an uncomfortable mix of Shaun of the Dead and a Kodak commercial about young lovers frolicking in a field of wheat. The overall effect is less reminiscent of the blue-grey brood-fest of Edward, Bella and co., and more in line with the work of Cameron Crowe (although there are several more people getting their throats ripped out here than in Jerry Maguire). At its best, it’s an entertaining zombie comedy that absolutely takes its place alongside Shaun of the Dead and Zombieland with its likeable cast and often stunning production design. At its worst, though, it plays like a weepy Zach Braff crapfest shrouded in Instagram filters and a Bon Iver soundtrack (R is a vinyl-collecting zombie, you see).

The combination is near impossible to pull off. Director Jonathan Levine has mixed comedy and pathos successfully in the past (50/50), but here he’s faced with trying to make us buy the idea that hope will cure zombification while also making jokes about pulling people’s faces off. It’s pretty much a lose-lose situation, but Levine soldiers on nonetheless. To put it more succinctly, Warm Bodies is quite possibly the only zombie in the history of cinema that will ever feature a meet-cute montage set to Bruce Springsteen’s “Hungry Heart,” and that’s okay. I can deal with one. ■

Still 2,793 active cases of COVID-19 across the province.

67,080 cases of COVID-19 have been reported across the province according to Santé Quebéc.