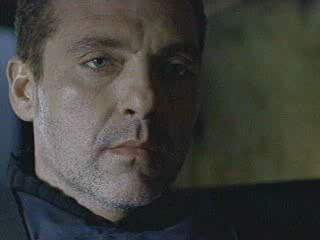 Does Montreal play itself?: As predictably as death and taxes, Montreal stands in for New York, as evidenced by the film’s first shot being of the Statue of Liberty. For such a low-budget movie, though, more effort than necessary has been put into masking everyday occurrences like street signs, French business names and Canada Post mailboxes. It still doesn’t look anything like New York, no matter how many helicopter shots of the Williamsburg Bridge they toss in there, but it’s more effort than many films go to.

Notable local talent:  Swindle has bigger roles for locals than the usual American productions; omnipresent character actors Alain Goulem and Conrad Pla have meaty supporting roles, comedian Mike Paterson swaggers around in polyester suits as a colorful Elvis wannabe named Fly… but the most notorious cast member of Swindle isn’t known for her acting. Swindle is one of the few acting credits of Geneviève Sabourin, the Montreal actress who was arrested last year for allegedly stalking Alec Baldwin. She plays one of the bank employees taken hostage by the thieves and spends most of the movie tied up on the floor. I will defer all obvious jokes to you.

Most egregious local landmark:  At first I thought that the building with the columns used as the bank central to the plot was once again the Sun-Life building; after all, it has made appearances in almost every movie I’ve reviewed for this column so far. Surprisingly enough, though, Swindle shows enough of Montreal to prove that this is in fact the CIBC Building at St-Jacques and Bleury. If I were a more prudent researcher, I’d go back to the old Made in MTL columns and verify if I accurately identified the buildings there, but hey: these Tom Sizemore movies don’t watch themselves.

Swindle exists in a bizarre vacuum, intemporal yet dated. Part of it is because the Montreal it depicts is familiar yet no longer the same; the storefronts are different, the bars are vaguely familiar but have probably changed names half a dozen times since, and the mild spring weather depicted seems like science fiction when I look outside. As I mentioned above, the street signs have (mostly) been changed, and if it wasn’t for the presence of a Québécois actor (Sasha Gervais, in his only screen role; he’s now now an activist type who hangs out with Jean Barbe) doing a very dubious French accent, I might have been fooled for a bit.

Another part of it may be that the film is a deeply 2002ish crime thriller, still indebted to Tarantino’s flowery pop-culture monologues, chopped-up nonlinear narratives and the once-hip concept of dangerous criminals in white cowboy hats and pleather pants. It stars a thinner, relatively clear-eyed Sizemore, the memory of which is even more distant than the popularity of Bran Van 3000, whose E.P. Bergen wrote the irritating electro/trip-hop score that swaddles the film like a flange blanket. Another sign that this movie is at least 10 years old: Jean Leloup is credited as “musical talent.”

Sizemore plays Seth George, a double agent who poses as a criminal at the behest of a detective pal (Goulem) to catch a team of bank robbers led by Sophie Zenn (Sherilyn Fenn). After proving his mettle by stabbing a French guy in the hand, Sizemore joins the crew on a bank heist that goes awry… or does it? As Sizemore starts acting all Robin Hood-y with his money, his cohorts begin to suspect he might have ulterior motives, while the police think he may be drawn to the dark side after all.

Beyond the snakeskin jackets and Irish bars that may or may not be O’Regan’s on Bishop, Swindle’s defining characteristic is its slavish dedication to the tropes of the bank robbery movie. The motley crew of robbers (the old pro, the sexy vixen, the deranged psycho, the doomed, nervous young upstart and our noble lead in for one last score), the unnecessary nonlinear timeline, the Dog Day Afternoon-style standoff with the cops, the old lieutenant a month away from retirement (Danny Wells, who played Luigi in the old Mario Brothers TV show) who speaks only in old Jimmy Cagney lingo, the dorky bank manager (Dave Foley, seemingly hard up for cash post-NewsRadio) who grows balls at the most opportune time… All the elements are there for a perfectly forgettable night at the movies (or on the couch, because you got to the video store late and everything was out, as per tradition with Sizemore flicks).

Swindle isn’t actually terrible; it has a few cool directorial flourishes and the cast is better than the material (although I would love a Val Kilmer-esque wild card to inject a bit of insanity, as is often customary with these types of movies), but it’s impossibly bland and derivative. It’s product, made to fill a gap that would otherwise stay empty and designed to be instantly forgotten. I doubt that even Sizemore would expect anyone to be watching his 10-year-old cash grabs. ■