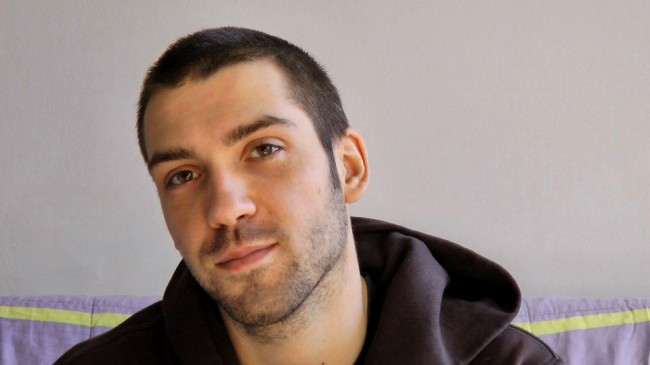 Equality isn’t all it’s cracked up to be, and it isn’t something queer people should aspire to because, well, what exactly are you looking to be equal to in the first place?

“Many of us would argue that the kind of equality we’re interested in isn’t possible within the current institutional structures that exist. Marriage, militaries and prisons must be abolished as we know it” — that’s the crux of Against Equality’s stance, according to Ryan Conrad, one of its founders and the editor of its three-book anthology series. The U.S.-based anti-capitalist collective recently hopped the 49th parallel into Montreal with his expatriation.

The 29-year-old Maine native will be on hand tomorrow at the Concordia Co-op Bookstore to launch Against Equality’s third pocket-sized book, Prisons Will Not Protect You. The book is a collection of already-published, archived critiques of hate crime legislation in the United States, with particular focus on how it targets members of marginalized communities. The previous two books in the series took on gay marriage and military service. Cult MTL caught up with Conrad over the weekend via email while he fought off a winter-induced plague.

But first, an introduction to Against Equality’s stance on hate crime legislation (HCL) for the uninitiated:
“HCL is a simple, one-size-fits-all, punitive solution to quite complex social problems,” Conrad says. “We see HCL, which essentially serves to increase penalties on things that are already illegal and punishable (ie. assault), as a method of prison expansion by keeping people in prison longer, if not indefinitely. Furthermore, HCL has no proven track record of actually reducing crimes committed against protected groups, as contributors to our anthology show. It’s really a joke to believe that someone committing a hate motivated assault hesitates to consider whether or not a hate crime enhancement charge will be laid.  Proponents argue that HCL is a deterrent, but this just hasn’t been proven, and fails to address root causes of anti-queer/trans violence.”

TL: How did it come to be that HCL began causing more harm than good?
RC: I don’t know if one can argue that HCL ever did more good than harm from the beginning. That is not to say the intention behind them wasn’t out of genuine concern for queer and trans people, or that anti-queer and anti-trans violence isn’t real. What we are demanding here are better solutions to deal with violence and harm that doesn’t rely on expanding the reach and surveillance power of the increasingly for-profit-run prison industrial complex. Prisons don’t solve problems; they compound them, and as our book shows through a number of case studies, like those of the New Jersey Four and the Texas Four, prisons haven’t worked very well for queer, trans and gender nonconforming people.

TL: What are some of the better solutions, then?
RC: This is exactly the question we want people to be asking. HCL distracts us from asking this question and from creating these better solutions collectively. There is no one right way, nor should AE (Against Equality) be dictating the ways different and diverse communities address violence and harm, but the restorative justice models that a handful of groups like Critical Resistance and Generation FIVE have been working on seem the most promising. Restorative justice, in principle, is an approach to addressing harm that focuses on the needs of the victims and the offenders, as well as the involved community, instead of focusing on abstract legal statutes predicated on punishment and revenge.

TL: How does HCL target the poorest sectors of the population?
RC: People do illegal things all the time, but only certain people are punished. HCL disproportionately targets the poorest populations, particularly people of colour, who cannot afford the legal resources necessary to fight back against charges of having committed “hate crimes.”  Ironically, they are from the very same marginalized communities that HCL is supposed to protect. I’d also add that HCL does nothing but cause harm to those gay and lesbian people already caught up in the prison system who are more often than not poor.

TL: But how does it target them? Are people who come from ethnic minorities and/or the lower end of the economic spectrum more likely to be intolerant (of queer/trans, etc. people), to the point of violence?
RC: Absolutely not. Thanks to the destruction of the welfare state, poor people — who often come from racialized and immigrant communities — have to rely on family and religious networks to meet their material needs, instead of the state. This subjects them to a higher likelihood of interacting with heterosexist and transphobic family members. White people, who are more likely to have some degree of economic and social mobility, can meet their needs without having to rely solely on family networks, and therefore come into contact with heterosexist family members less often and less publicly. The kind of racist thinking — that people of colour and/or immigrants are more homophobic than white people — is insulting and a distortion based on convenient and shallow stereotypes that don’t take into account the economic structures that compound anti-queer/trans violence. 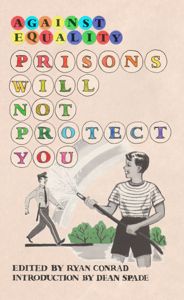 TL: From the AE website: “The pieces here question the gay community’s fealty to the prison industrial complex, arguing that hate crimes legislation, which enhances penalties and can even be used to bring in the death penalty, only serves to funnel massive numbers of people into prisons with increasing lengths of time served and the use of tortuous methods like solitary confinement.”
There was a really interesting piece in Rolling Stone recently about the detrimental psychological effects of prolonged solitary confinement, which is becoming the norm, particularly in supermax prisons. It’s obvious the prison system has no real way of reforming people, especially now that supermax prisons — which are considerably more expensive to run — are eating into prison budgets for education and work programs (not to mention that it places both people who commit relatively minor crimes in the same kind of 23-hour-a-day solitary confinement as those who commit very serious crimes). But given that some people really do belong in prison, should prisons have the responsibility of reforming criminals? What are your thoughts on this?
RC: It’s not simply about putting the right people in prisons, but addressing the root causes of harm and violence in our societies. Furthermore, as Dean Spade points out in the introduction to the anthology, the reality is that the most dangerous people that cause the most violence and end the most lives are still, and always will be, on the outside — like the leaders of governments and banks, and those wearing military and police uniforms.

TL: Class and classism are major themes in the work AE does, but you see it from a gay/queer perspective, which seems pretty unique. Am I wrong in thinking that these equality movements are usually seen from pretty homogenous perspectives, or with homogenous goals in mind — gay people for gay rights, women for women’s rights, etc.?
RC: Against Equality is an anti-capitalist collective that largely relies on a class-based economic analysis that goes beyond the stagnant anti-assimilationist queer critiques that rely on romanticizing queerness as an outsider cultural status. AE certainly isn’t the first queer group to do this kind of work (Queers for Economic Justice in NYC and LAGAI in the Bay Area come to mind), although there aren’t a lot of us, and we certainly don’t have the same massive amounts of resources and funding that mainstream gay and lesbian political organizations do. Why is obvious: we want to tear the system down; they want to join in neoliberal clusterfuck.

TL: I can only assume AE evokes a lot of conflict — it’s right there in your name, after all: Against Equality. Is there pressure on (politically active) queer people to toe some sort of party line? If so, who’s doing the pressuring?
RC: In the States, where most of our work is located, the attitude coming from the gay establishment is that you’re either a good liberal and support gay equality or a bad conservative redneck that hates the gays.  It’s very George W. Bush: you’re either with us or you’re with the terrorists. Yasmin and I have both received death threats from other gay people because of the way our collective’s politics challenge this simplistic and deleterious dichotomy they’ve set up. This points to how little space there is to actually talk about the issue at hand.

TL: The two previous polemic anthologies — one on gay marriage and one on gay people in the military — also address equally lofty and overwhelmingly broad and complex topics. Where should young people or political novices looking to take up some of these battles begin?
RC: Our three anthologies are comprised of writing from all sorts of folks and are intended to be a first taste of a much larger political project. The range of writing varies from the more academic to firsthand personal narratives, and this mix of approaches makes them a great introduction to the topics.

Prisons Will Not Protect You launches Wednesday, Jan. 23 at the Concordia Co-op Bookstore (2150 Bishop), 7 p.m.