The Toronto International Film Festival runs from Sept. 7 to 17. Here’s what we saw on day five:

It’s weird how little actual dramatic tension there is in this biopic of Robin Cavendish, a polio survivor who spent most of his life paralyzed and fighting not only for the rights but the health of disabled people. Some of it might have to do with the fact that Cavendish’s wealth is what made it possible for him to pioneer such incredible advancements in the field, meaning that any and all developments seem relatively easy and are always taken in stride by his entourage; part of it might have to do with the fact that director Andy Serkis developed the project alongside Cavendish’s real-life son Jonathan, who has since become a movie producer. The term “love letter” is bandied about a lot when it comes to films like this one, but it has rarely been more accurate than with Breathe. Love letters can be beautifully written, but they don’t mean much if they weren’t written for you.

Andrew Garfield plays Cavendish, a tea importer who is struck with polio while living in Africa and paralyzed from the neck down. Doctors tell his wife Diana (Claire Foy) that there’s no room for improvement, but she won’t have it. She promptly gets him out of the hospital and develops a portable respirator for him, then a wheelchair with all of the necessities built directly into it. Things are rough in the early going, but both Robin and Diana take everything in stride, and the film soon moves from disease-of-the-week into a pleasantly low-key slice-of-life drama that actually has little to no dramatic thrust. Breathe is significantly less of a middle-of-the-road milquetoast bummer than it seems, but it’s also kind of a non-starter. It’s so reverent to its characters and their real lives that it winds up feeling sort of anemic and slight, even if Garfield and Foy give winning performances and Serkis directs with a mostly deft, lightly comic touch. 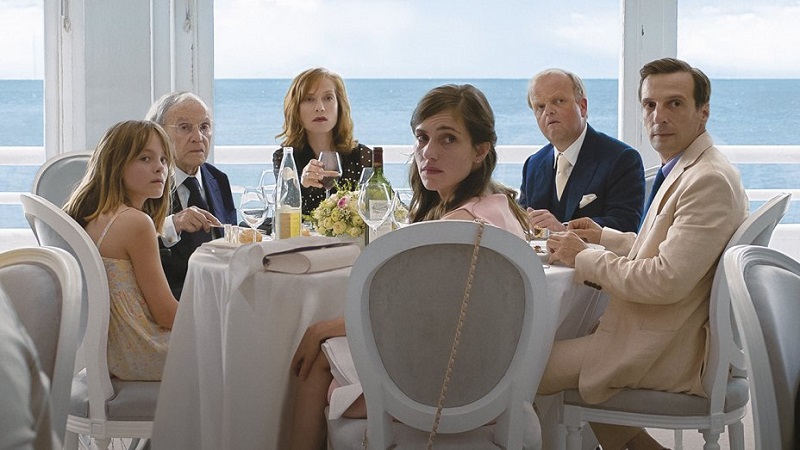 Those of us worried that Michael Haneke might have been developing that devil known as compassion with Amour can sleep soundly. It seems Haneke has made Happy End expressly to expunge the guilt that having compassion may have brought him.

In what proves to be a vague sequel to Amour, Haneke explores the lives of a bourgeois French family comprised pretty much entirely of monsters of different stripes. The patriarch (Jean-Louis Trintignant) is losing his mind to Alzheimer’s while his children (Isabelle Huppert and Mathieu Kassovitz) live selfish lives and slowly destroy their own children. The film’s protagonist, if there’s one, is Kassovitz’s daughter, a disturbed pre-teen who seemingly takes no particular shine to anything in the world.

Happy End hits on many of Haneke’s preferred themes, but it lacks the focus of his best films. It’s nasty and disturbing and alienating in the way that only Haneke knows to make ’em, but the wider scope does a disservice to the most exacting and calculating chronicler of human misery and ugliness. He also weirdly and not-too-successfully takes on the evils of social media in a way that betrays his status as a septuagenarian. That having been said, Happy End works wonderfully as a primer on Haneke — more accessible that Caché or even Funny Games, but just as despairing and effective in the home stretch. If you, too, want your life irreversibly altered by the pessimism of an exacting Austrian auteur, this is a great place to start.

The Killing of a Sacred Deer

Yorgos Lanthimos’s films have always been, if not exactly comedic, imbued with a dark absurdity that made their seriously fucked-up worldview easier to swallow. Lanthimos now moves into full despairing Haneke territory with the profoundly disturbing and extremely effective The Killing of a Sacred Deer. Though predicated on a similarly fable-like premise, The Killing of a Sacred Deer proves to be much closer to a straight-up horror film.

Colin Farrell stars as a successful surgeon who has become friendly with the son (Barry Keoghan) of a patient who died on the operating table. As their relationship grows, the boy’s twisted motivations become clearer, roping in the surgeon’s wife (Nicole Kidman) and children in a damned-if-you-damned-if-you-don’t raising of the stakes that has no real positive outcome.

It’s difficult to talk about the film without revealing details — Lanthimos peels back the layers of the onion slowly and methodically, keeping the film’s antiseptic and oppressive atmosphere at a fever pitch throughout. It’s an unbelievably fucked-up movie even when it’s not explicit (don’t worry — it gets worse), which places it snugly within Lanthimos’s oeuvre no matter what you may feel about its hopelessness. ■

The Killing of a Sacred Deer opens in theatres on Nov. 17.