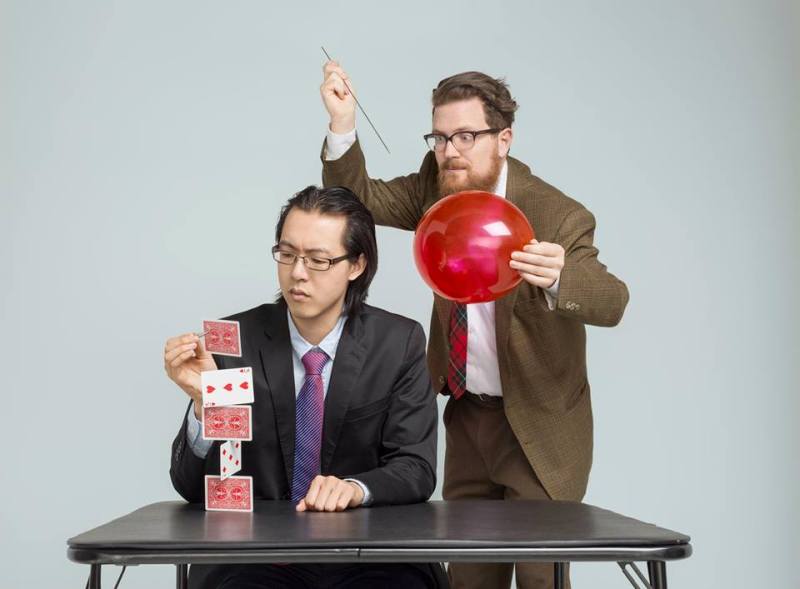 The Montreal Fringe Festival has been filling Plateau venues with independent, often edgy, sometimes experimental theatre, comedy, dance, music and other types of performance art since May 29, but come Monday, it’ll all be over. Read on for our third batch of reviews of recurring shows that you can catch on the festival’s final weekend (and see the previous batch here):

I had no idea what this show was about and just wanted to fill a hole in my schedule, but “contemplative conjurer” Derrick Chung’s biggest magic trick may have been convincing this old cynic to tell Cult MTL readers they won’t regret picking up a ticket to one of his last two shows at this year’s Fringe.

I’m not a big fan of sleight-of-hand and illusion (too many years covering politics), but Chung’s mental processes are truly mesmerizing. If you’re the kind of person who hated the geeks in high school who could solve a Rubic’s Cube in minutes (or at all), Chung is the kind of guy that those geeks hated even more. That’s all I have to say, you’ll just have to divine the rest, like Chung does. Or go see the show, it’s so much easier. (Peter Wheeland) At the Montreal Improv Theatre A (3697 St-Laurent), June 17 (4:15 p.m.), 18 (7:15 p.m.), $10/$8 students

L.A. comedian DK Reinemer sees a “lot of walls going up” in his native U.S. of A, so he decided to vent his frustrations by travelling across Canada with his one-man, multiple persona show.

It’s safe to say that Trump jokes here won’t divide the audience — unless it’s into laugh hard and laugh harder camps — but Reinemer offers much more, from broken (and broke) self-defence instructor Joe Striker to a clown whose dispatcher misdirects him to a bachelorette instead of a kid’s birthday party. He throws in a few musical numbers as well, including the hilarious Ladies’ First, and even a tin whistle tribute as the sad sack captain of the Titanic.

Active audience participation keeps the party spirit going even after the clown has done his dirty dancing. It’s a fun, fast-paced hour from an engaging entertainer that I guarantee will end with a standing ovation. (PW) At Studio Jean-Valcourt du Conservatoire (4750 rue Henri-Julien) June 16 (6:00), June 18 (4:15), $10/$8 students

With about seven storytelling shows under his belt (like Pretending Things are a Cock) Aussie performer Jon Bennett is back with… a board game. Fans of his piece Fire in the Meth Lab will recall a super dumb board game belonging to his brother, based on washed-up pop star Jason Donovan (Justin Bieber Down Under in the ’80s). Here, Bennett invites the audience to play along, an absurd proposition because a) the game consists of wildly unanswerable questions about Jason and b) how can this be a show? Bennett is the first to admit this could flop spectacularly. But if you’re a fan, you will relish seeing him. And if you’ve never seen Bennett perform, you’ll hopefully like it because it’s just an hour-long show about an outrageous game, stuffed with his anecdotes.
(Sarah Deshaies) At Petit Campus (57 Prince-Arthur E) June 16 (4:45 p.m.), 17 10 p.m.), and 18 (12:30 p.m.), $10/$8 students

An actual stage is rarely one of the stages of grief, but Gina Granter has made it one in her deeply personal story about the sudden and unexpected death of “the one,” her partner and soulmate Blake, whom she met at 19 and who died alone, far from her arms, just three years later.

Granter, a Dawson English professor who has made a name for herself in the monthly Confabulation storytelling series, weaves her tale in a tapestry of time, place and song, from the coast of Newfoundland to Montreal, Halifax and Michigan, from Springsteen to Cohen to Phish. Like the wind chimes she uses to signal her segues across time and space, her story shifts from soft whispers to brief tempests, sadness to joy, tossed by love and loss and the numbing fog of incoherent fate. Yet despite the subject, Mapping Grief avoids dipping too deeply into sadness or sentimentality. Heart-wrenching and -warming in equal measure, be sure to bring enough tissues to share with friends. (PW) At the Montreal Improv Theatre A (3697 St-Laurent), June 17 (6 p.m.), 18 (2:15 p.m.), $10/$8 students

Meet the Merkin Sisters, a pair of reclusive and eccentric siblings venturing into the world with their attempt at “high art.” Donning one-piece swimsuits and pink bathing caps, Canadian performers and Fringe favourites Stephanie Morin-Robert and Ingrid Hansen spoof the opaque world of contemporary art and dance with elaborate and quirky gags, like a birthing scene involving a white glove and pink woolly sweater.

My favourite moment is when they spin like whirling dervishes – while wearing full-body curly red wigs over an electro dance track. All the while, the performers/directors/choreographers/writers lightly riff on bodies, family and motherhood. I felt shock, disgust, delight and wonder. See it once, then see it again high. (SD) At la Chapelle (3700 St-Dominique) on June 16 (4:45 p.m.), 17 (7 p.m.), and 18 (3:15 p.m.), $10/$8 students