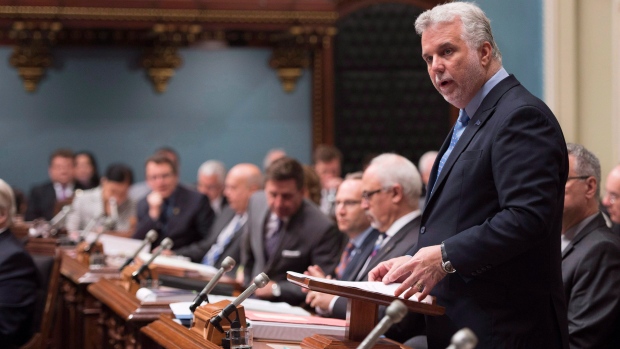 In a year that was marked by news ranging from terrible to Trump,  it was great to hear a little good news this week about the fight against systemic racism faced by members of Quebec’s Indigenous communities.

Quebec Premier Philippe Couillard has finally agreed to demands for a provincial inquiry into the treatment of First Nations women and even went a few steps farther, mandating retired Superior Court justice Jacques Viens to look into systemic violence, racism or discrimination against Indigenous men and women throughout the health, social service and justice networks.

The Quebec probe will go well beyond the mandate of the federal inquiry looking into missing and murdered Indigenous women, which until very recently Quebec was using as a pretext for refusing to conduct its own.

It comes more than a year after a report by Radio-Canada’s Enquête investigative journalism program revealed serious accusations of abuse against Indigenous women and men by Val d’Or Sûreté du Québec officers. A special team of police investigators from Montreal probed 38 complaints from 21 women and seven men, including 14 of a sexual nature, 15 of excessive force and nine of forcible confinement — so-called “starlight tours” where victims are driven far out into the countryside and left to walk back to town. In the end, though, in November prosecutors recommended charges in just two cases involving two retired police officers in Schefferville. Once case was dropped because the accused officer had died, but prosecutors declined to lay charges in the remaining 35 cases because they deemed there was insufficient evidence or accusers were not able to identify the officers involved.

“The fact that no criminal charges are being laid in some cases doesn’t necessarily mean the alleged events didn’t happen,” prosecutor Nadine Haviernick told reporters in November. “Rather, it means that the evidence we have won’t let us file criminal charges.”

The disappointing results renewed calls from Quebec First Nations groups for a formal inquiry, which finally bore fruit this week.

The announcement came after several meetings between Indigenous leaders and top government officials in recent weeks. The choice of justice Viens, who served in the Abitibi district that includes Val d’Or for more than 25 years, was made in consultation with those leaders.

Cree Grand Chief Matthew Coon Come and Ghislain Picard, chief of the Assembly of First Nations of Québec and Labrador, joined Couillard for the announcement and credited the courage of the women who came forward in Val d’Or, Rouyn-Noranda, Chibougamau, Sept-Îles and Schefferville for pushing the government forward.

“The inquiry will enable them to share their experience and help to find solutions,” Coon Come said. “This exercise is not about blame. It is about all of us, Indigenous people, police officers and other stakeholders, working together to fix problems. Listening to the Indigenous women will help them begin to heal. I want to thank them for their courage and perseverance — without them, this inquiry would never have happened.”

Edith Cloutier of the Val-d’Or Native Friendship Centre told CBC that women there were rejoicing after watching the announcement.

“The mandate goes above and beyond relations (between Indigenous people) and police officers. We will address this whole sensitive and delicate question of systemic racism. … We’re savouring the moment.”

And although Nakuset, the executive director of the Montreal Native Women’s Shelter, called the news “amazing,” she warned that the commission would need front-line staff who understood the impact that colonialism, the residential school system and other traumas had had on Indigenous communities. She also told CBC she was disappointed by the weak mandate of the commission to look beyond the communities around Val d’Or, which Couillard left to Vien’s discretion. Systemic racism is not unique to the north, she noted. “It’s definitely happening here in Montreal. … We see it every single day.”

That Quebec has acknowledged the existence of systemic racism against First Nations members is a huge step towards finding concrete solutions. Although the commission won’t be reporting until after the next election in 2018, the province is also setting up a working committee with Indigenous groups to “find rapid solutions” to ongoing problems independent of the commission’s work.

The fact that the inquiry will examine relations with all Indigenous peoples and not just women will be seen by some as step backward, but the larger issues of racism, discrimination and the effects of colonization such as poverty, substance abuse, suicide and sexual abuse are at the heart of much of the violence faced by women and children in First Nations communities. Failure to examine the larger picture would result in a failure to find effective solutions to the host of problems plaguing Indigenous people both inside and outside their communities. That’s also why the commission needs to look well beyond Val d’Or and into cities like Montreal, where widespread anti-Indigenous bias and stereotyping was made crystal clear during the Oka Crisis and continues today through racial profiling by police, housing and employment discrimination, etc.

The incidents of alleged sexual assault in Val d’Or and the failure of the judicial system to prosecute these cases is unfortunately not unique to First Nations members. Balancing justice for victims against the basic legal rights of the accused is a difficult challenge that continues to plague countries around the world, and Quebec is no exception. It is estimated that only six of every 100 incidents of sexual assault are reported in Canada. Of those, only one-third result in charges and only 21 per cent of those prosecutions result in convictions.

What happened with the Val d’Or accusations was not the exception but the rule. That’s not to say the injustice should be ignored, on the contrary. But the issue requires a much broader probe into the pervasiveness of rape culture and the need to establish educational, support and legal resources to help prevent and prosecute sexual violence in Quebec and Canada.

In many senses, Quebec has shown the path forward this week for dealing with systemic racism involving Indigenous communities. We can only hope that in 2017 we do the same for sexual assault by seeking to create a safer, more just society for the thousands of women, men and children who suffer sexual violence every day and for the millions more who will suffer if we continue to ignore the chronic crisis. ■