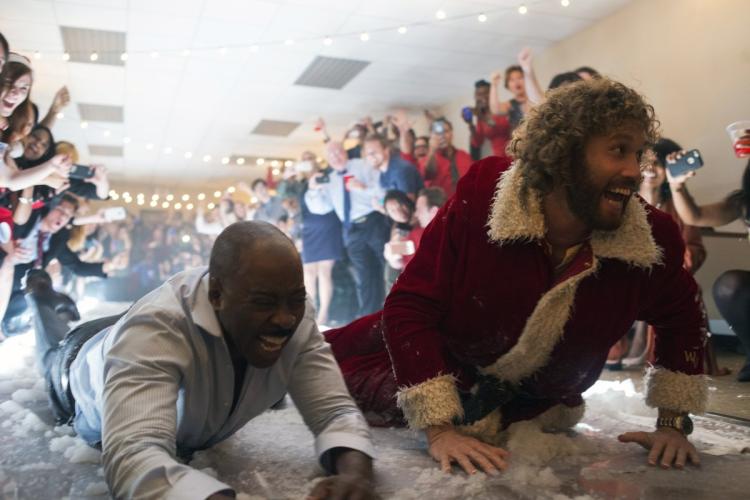 Courtney B. Vance and TJ Miller in Office Christmas Party

One of the things I’ve come to realize doing this job for a few years is that Christmas movies never stop coming. If you’re not someone who has to see every movie (and, let me be clear, I don’t have to see every movie), you might see a new Christmas movie every couple of years, mixed in with the inescapable clutches of the cable classics we’ve all come to know and begrudgingly love.

As I write this, I’ve seen no less than three raunchy Yuletide comedies and we’re one week into December — the fact that this latest one comes with the very generic title of Office Christmas Party is worrisome (the marketing people lost a great opportunity to have the poster just be a yellow, No Name brand-style block), but it turns out to be the best film in the not-very-competitive R-rated Christmas Comedies of 2016 category.

The Chicago office of data storage company Zenotek is struggling; they haven’t hit their growth goal for the year, and their cutthroat interim CEO Carol Van Stone (Jennifer Aniston) is getting ready to shut down the branch, which is run by her coddled and irresponsible younger brother Clay (TJ Miller). She cancels the holiday mixer as a cost-cutting measure and gives her brother and his chief technical officer Josh (Jason Bateman) precisely one day to close a multimillion dollar deal with the buttoned-down Walter Scott (Courtney B. Vance). Clay, Josh and head programmer Tracey (Olivia Munn) decide to go against the CEO’s wishes and throw a huge rager in order to impress Scott, keep the branch alive, make sure everyone gets their Christmas bonus and maybe, just maybe, find love in this whole mess.

Office Christmas Party assembles a large (and borderline unwieldy) ensemble cast to participate in the hijinks. On top of those previously mentioned, you’ve got Kate McKinnon as the office’s dorky, overly cautious HR manager; Vanessa Bayer as a harried single mom who entertains a flirtation with a new hire (Randall Park); Sam Richardson as the unassuming department head who lets his hard-partying DJ alter-ego fly; Deadpool’s Karan Soni as a dorky programmer who hires an escort (Abbey Lee Kershaw) to pose as the imaginary model girlfriend he’s been bragging to the whole office about; Jillian Bell as said escort’s psychotic pimp and Rob Corddry as the Corddry-esque lout who entertains a love-hate relationship with McKinnon’s perpetual enforcement of rules. 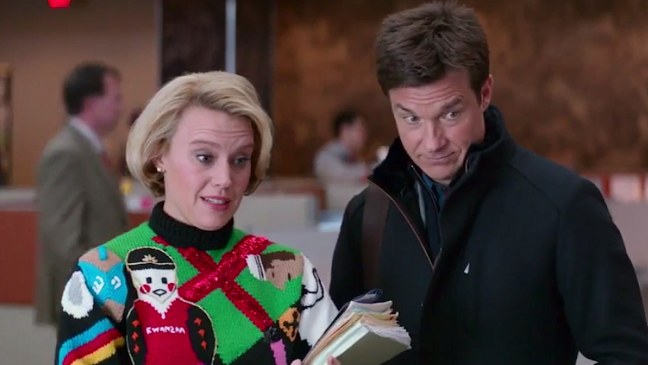 I’m of two minds about whether or not this stack-the-bases approach works. On one hand, filling every single role with comedic pinch hitters makes it easier to work through the middle part of the film, which otherwise indulges in exactly the kind of shirtless, slow-motion partying clichés one would expect from a movie called Office Christmas Party. On the other hand, it puts a real damper on the film’s flow when it needs to constantly shuffle back and forth between its innumerable characters, all of whom are living through separate arcs. Let’s put it this way: there are as many, if not more, characters in Office Christmas Party than in a season of The Office, which doesn’t do anyone any favours.

As I was exiting the movie, a dude on the escalator behind me described the film as “Hot Tub Time Machine 2, the 2016 version”, which perhaps points to an unnecessarily large amount of these types of party movies hitting theatres. (Hot Tub Time Machine 2 came out in 2015.) The party hijinks contained in Office Christmas Party are not, in that respect, particularly different from any party hijinks contained in other movies: enemies become friends, Miller leads the crowd into a frenzied rendition of DJ Kool’s “Let Me Clear My Throat”, the meek are revealed to have a wild side, there’s some reindeer let loose in the party, the dance scenes do that thing where they slow down and speed up constantly, and so on.

Where Office Christmas Party actually succeeds is in its more toned-down gags; although the characters broadly fulfill the necessary stereotypes for this kind of shit, they’re actually a little more pared-down and realistic than the norm. Aniston and Miller’s sibling relationship, Bateman and Munn’s will-they-won’t-they relationship and Corddry’s visceral hatred of workplace rules all feel kind of real, for what it’s worth. The movie doesn’t necessarily draw out the best comedy from them, but at least it feels like slightly more than elevated caricatures throwing baggies of cocaine into the dry ice machine.

What works best about Office Christmas Party isn’t its outrageousness. In fact, outrageousness (the film ends with a wild car chase, par for the course in this type of thing) is the most annoying element about an otherwise affably unambitious comedy. Miller is used better than he’s been in most movies (credit bloopers seem to suggest his best moments are actually improvised) and the film contains a good dozen legitimately good jokes amidst many overreaching set pieces and forced moments of wackiness. If I didn’t know any better, I’d say this movie seems like it kind of just happened — but as far as those types of movies go, you could do worse. ■