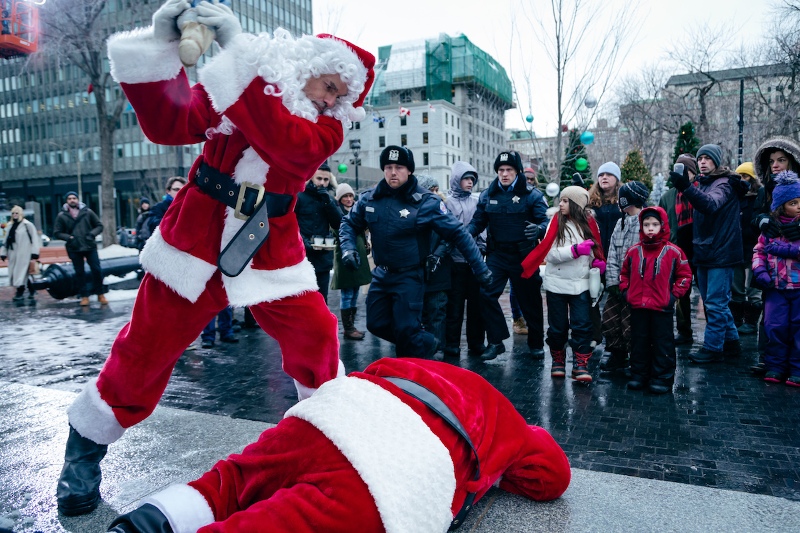 Does Montreal play itself? No, it stands in for kissin’ cousin Chicago, as it so often does.

Most egregious local landmark: The thing about a film like Bad Santa 2, which requires no physical suspension of disbelief or green-screen hangar, is that all of its locations are real. For all of its flaws (and they are many), Bad Santa 2 exists in the upper echelons of films I’ve covered here if only for the sheer amount of Montreal in it. Of course, it’s only a year old, which might explain part of it. One thing that’s already been preserved in amber by the film is the late Moe’s Diner at de Maisonneuve and Lambert-Closse, where Billy Bob Thornton and Tony Cox meet to hash out a plan early in the movie.

A lot of the film’s action takes place in the headquarters of the charitable organization the protagonists are trying to rip off, which is in the building currently semi-occupied by the Montreal Amateur Athletic Association on Peel. In fact, Bad Santa 2 is also notable for taking place mostly north of Ste-Catherine rather than the more often featured southern part. Thornton, Cox and Kathy Bates spend one scene taking donations in front of St-James United Church, Grumpys stands in as their local watering hole (with bonus post-anal-sex-afterglow scene shot in their bathrooms!), Thornton gets propositioned by Santa-fetished-good-girl-gone-bad Christina Hendricks in front of McKibbins and they consummate said fetish behind a dumpster in the alley at Peel and Ste-Catherine. All highly artistic, very reputable uses for these locations (except probably the dumpster).

Notable local talent: It seems the film’s wealth of locations is in contrast with its relative paucity of local talent. The biggest speaking role goes to Cristina Rosato, as the villain’s extramarital paramour, but what appears to be a developing subplot sort of peters out completely after her one big scene. Most of the supporting roles are American actors beyond that. Local jazz singer Ranee Lee has a small part as the charity choir’s leader, and there are one- or two-lines role for people like Tyrone Benskin, Sean Devine and Kyle Switzer.

I truly think there could have been a good sequel to Bad Santa — had that sequel come in 2005. It feels like momentum isn’t considered enough when dealing with comedy sequelitis. Action movies sometimes thrive on the amount of time elapsed between two points (“I’m too old for this shit” et al.), but comedies seem to treat that period of time as a potential amnesiac potion that allows them to essentially repeat jokes from the first one and hope that audiences don’t remember. It’s not like Neighbors 2 is the best comedy sequel ever made, but it came out in such close proximity to the original that it actually felt like a continuation of the first film rather that a resurrection no one asked for.

Bad Santa 2 comes with exactly none of the behind-the-scenes pedigree of the first one, almost a decade and a half after that one was a leftfield hit; Terry Zwigoff’s been pretty quiet since the failure of Art School Confidential a full decade ago, and writers Glenn Ficarra and John Requa have moved on to directing.

That certainly stacks the odds against them, but the world has also changed a lot since 2003. Bad Santa existed in a pre-Kenny Powers, pre-Adult Swim, pre-Twitter world where cheerful and arcane vulgarity wasn’t just rare on-screen, it was almost refreshing. I don’t know if there’s really a clear throughline between the current political climate and the deadening thud with which many of Bad Santa 2’s jokes land, because it seems that blaming the world for a movie that isn’t very funny is letting some people get away with making some jokes that aren’t very funny, either. 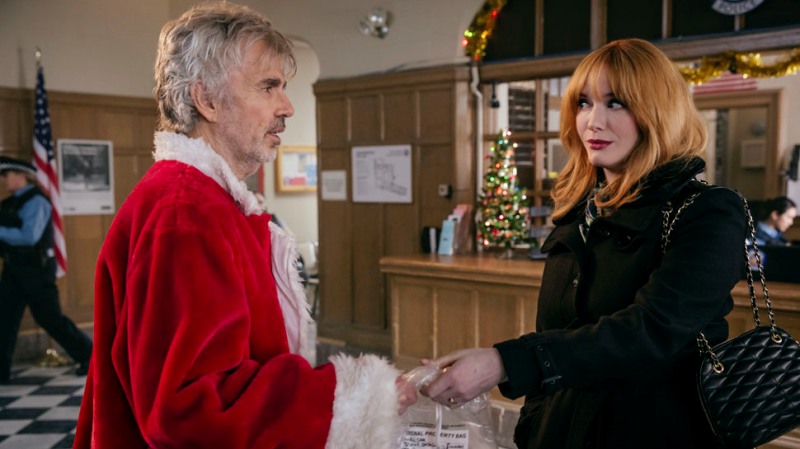 In the 13 years since he was screwed over by his accomplice Marcus (Tony Cox), Willie Snoke has been biding his time stealing booze from the pharmacy where he works and vomiting in the alley. He’s about ready to end it all and stick his head in the over (alas, it’s an electrical one) when his all-grown-up (but still childlike) little buddy Thurman Merman (Brett Kelly) shows up. It turns out that Marcus has gotten out of jail and cased a big score in Chicago, stealing money from a charity whose owner (Ryan Hansen) is both skimming off the top and cheating on his wife (Christina Hendricks) with his assistant. Willie accepts to make amends with Marcus given the size of the score, but what Marcus conveniently avoids mentioning is the third partner in this equation: Willie’s biker-mama mother and arch-nemesis (Kathy Bates).

Other than the inclusion of Bates as an even boozier, bawdier and inappropriate female version of Willie, there isn’t that much to differentiate the two versions of Bad Santa. Here, too, a beloved TV star is reduced to being Willie’s freak-in-the-sheets, fuck-me-Santa love interest; here, too, Merman’s perpetually chipper, clueless demeanour leads to some extra hassles; here, too, Willie is a glum fall-down drunk without much to keep him alive; here, too, the heist backstory is pretty half-assed.

I like the original Bad Santa a lot (and, weirdly, so does my dad, and he views anything that isn’t Bob Newhart — or mimicking the cadence of Bob Newhart — with deep suspicion), but part of what makes that film’s incessant vulgarity amusing is its sort of bemused, absurdist slant. It’s hilarious to me that in the original, Thurman gifts Willie a pickle carved out of wood that’s been “stained” with his blood because it’s such a specific, dumb image. It’s less funny that Thurman has been carrying around a stuffed elephant stained with Willie’s blood since the ending of the first film (which ended in a shootout), because that’s a) just pathetic, b) a thing that we pretty much saw happen already.

Bad Santa 2 has a weary, strung-out quality that favours pick-n-mix strings of profanity above joke construction. Instead of comic set pieces, you’ve got characters swearing and Willie and Marcus taking turns teabagging each other while they sleep. It sort of comes across as the polar opposite of Sausage Party, which tackled these puerile chestnuts with a certain vigour; these feel like they’re straight off an old bawdy vaudeville record from the 1960s, where simply mentioning a nutsack sent the audience into fits of convulsive laughter. Even Thornton seems bored and despondent, turning his usual comedic crank persona way down into a sputtering, dead-eyed joke delivery apparatus.

There’s a certain joy to rampant vulgarity, and Bad Santa 2 certainly doesn’t position its characters as anything more than the most pathetic excuses for human beings (although Willie effortlessly has sex with multiple women despite shuffling around dead-eyed, looking like a dry-clean-only mongoose mistakenly tossed into the wash), but it doesn’t feel that joyous or particularly fun. Generally speaking, movies where everyone seemed to be having a lot of fun tend to be the most plotless, amiable and insignificant of movies, but Bad Santa 2 feels a little like the opposite. It’s said that the more people laugh on-set while making the movie, the more likely that the joke doesn’t land on-screen; if that’s the case, Bad Santa 2 must’ve been a true laugh riot. That, or a movie where “grab ’em by the pussy” would pass as a semi-tender pick-up line might just be a little ill-timed. ■