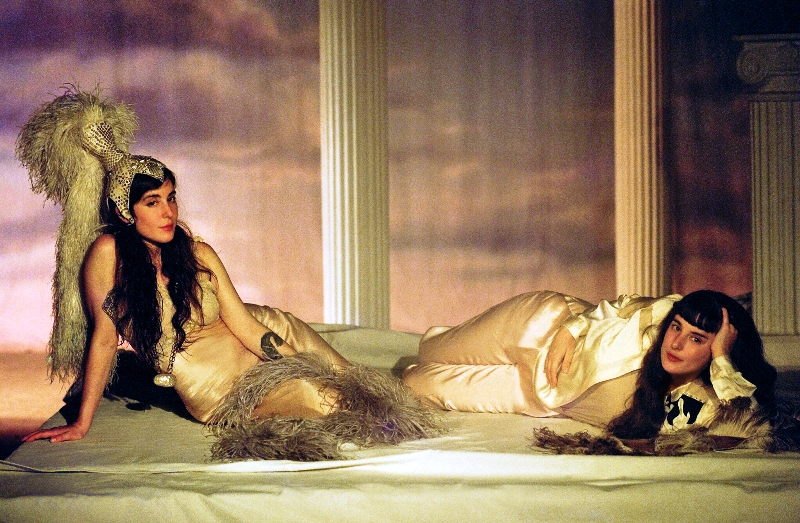 Sari and Romy Lightman of Tasseomancy

Tasseomancy’s Romy Lightman has lived a curious cross-border life over the past couple of years, a set of circumstances that propelled her into survival mode. Even curiouser, perhaps, these hard times are reflected in a new set of pretty (alt) pop songs.

The second LP by the Montreal/Toronto band, Do Easy, is named after a poem by William S. Burroughs that’s also a manifesto and an occult technique (outlined in a film adaptation by Gus Van Sant — watch it here) and, most importantly, a discipline to simplify your life.

“It’s all about exerting the least amount of effort possible,” says Lightman. “It’s about doing everything that you do with a certain kind of mindfulness where everything has its own order and its own place and in doing so you eliminate more work for yourself and have an uncluttered mind.

“I was really taken by this because in some ways my life resembled do easiness but for the most part it was ‘chaos reigns,'” Lightman says. “For anyone who’s chosen this artist lifestyle, there’s a need for self-regulation, so I started looking into heroes of mine: How did they live? How did they make it work? There was a period where I was reading lots of biographies, and this do easy manifesto really resonated.”

Lightman names Isadora Duncan and Colette as two of the historical figures she studied for guidance, but conceded that many of her musical heroes led lives that read more like cautionary tales, including the author of “Do Easy” — Burroughs was famously a heroin addict for decades, a lifestyle that was often reflected in his writing.

“That’s why I was so touched by [“Do Easy”], because it was so gentle and it showed me that even within all the flaws and the chaos that we all possess, there’s at least a grasping for some kind of way of doing things that not necessarily makes more sense but is more kind to yourself.”

Lightman explains that living in Toronto was one of the factors that kept her down during the making of this album. Though she’s reticent to resort to tired Toronto vs. Montreal clichés, she says that her sister Sari, who’d been a Montrealer for years, had a much better experience here.

“[Toronto] is a tough place to survive as an artist because it’s a city that inherently doesn’t really want you. It does when you reach a certain level, but Montreal is a lot more conducive to people who are striving, who need to be authentic and do their thing. Toronto was a very challenging place for me to try and integrate because it’s so expensive to live. There’s this pressure to conform or get out.

“That being said, I love Toronto — that’s where I’m from and I have my community there — so there was this real clash, a resistance within me and my relationship to the city and to myself, too.

“The music, for me, was just survival. It’s a pop record first and foremost. I was going to a lot of karaoke at the time and that sort of influenced the record, just seeing the power of popular songs, those melodies, and how cathartic they can be. I can only speak for myself but I was looking for a more universal means of communication, music that’s less abstract. I was taking these pop formats and trying to give myself advice for how to keep going and hoping it would resonate for other people.”

While Tasseomancy keyboardist Johnny Spence is spending some time in Amsterdam, the rest of the band — both Lightman sisters and drummer Evan Cartwright — are currently living in what Lightman describes as a “musical compound” with a rotating crew of musicians from Montreal and the ROC (including locals TOPS, who recently recorded an album out there). Though she initially planned to go to California for a month, Lightman has been living at the compound since January, and the timing of her trip — with the American election campaign — wasn’t exactly “do easy.”

“For a long time it felt embarrassing to be Canadian, with Harper — it was a really shameful period — and then I left and we have this sexy Prime Minister. I mean in comparison with what’s going on right now (in the U.S.)… It’s funny, I had this idea of calmness in California, but it’s a really fraught time to be here. Honestly, I find it exciting.

“That’s the funny thing about the ‘do easy’ manifesto: There’s this desire for ease and comfort and stability, but as an artist there’s a real impetus to not fall asleep, so I’m drawn to these more fiery scenarios. America is a crazy place — I’m totally fascinated. My plan has always been to come back (to Canada) but I feel like I have to see what’s going on here first, where all this will go.”

As we said our goodbyes on that note, I told Lightman to “stay safe” amid the craziness (and in the gun capital of the world).

“To be honest, I don’t know if anybody’s safe out here. I don’t want to be nationalistic but it really makes you realize that Canada, even in the worst conditions, it never really reaches this point. There’s a lot of issues with how Canada runs as a country but to be in a place where, systematically, people are not set up to take care of each other, it’s terrifying. It permeates into everything. The way people interact with each other is really ruthless.

“I’ve been meeting all these people who embody the other way, in reaction to what’s happening,” she adds, referring to the more progressive or leftist element in the U.S., “and sometimes it’s just as extreme. (Canadians) don’t have that impetus to go that far. It’s pretty scary.” ■