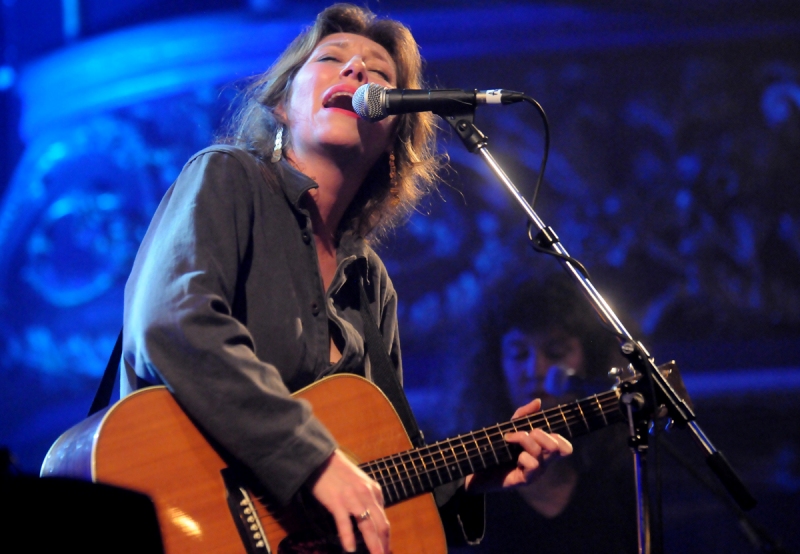 The 11th edition of the M for Montreal festival came, went and left us deeply dazed and hungover last week. The Cult MTL team was there from Nov. 16–19 to document the parade of local and international indie rock, rap, synth and dance acts that flooded venues from downtown to Mile End. Here are some highlights:

On M for Montreal’s opening night, local scene royalty Martha Wainwright played a headlining show at the Rialto to launch her new album Goodnight City. Emerging in a Maoist grey boiler suit, she sang (and played acoustic guitar for part of the show) accompanied by pianist Thomas Bartlett (who co-produced the new record, and whose late brother Ezra was the inspiration for a beautiful song called “Traveller”), drummer Phil Melanson, occasional back-up vocals by her half sister Lucy Wainwright and a new bassist named Josh, who, she said, she had just met the previous night — a joke? Maybe not. In any case, despite a couple of false starts to some of these new songs, the band sounded tight. It’s been a few years since I’ve seen Wainwright live but she’s as impressive as she’s ever been, emoting with her signature vocal style and subtle showmanship. Throughout a set consisting almost entirely of new material (plus a Safia Nolin cover that was deeply appreciated by the crowd — Nolin herself was in there somewhere), Wainwright also showed off her knack for weaving leftfield, even dissonant tendencies into her accessible folk/rock sound. (Lorraine Carpenter) 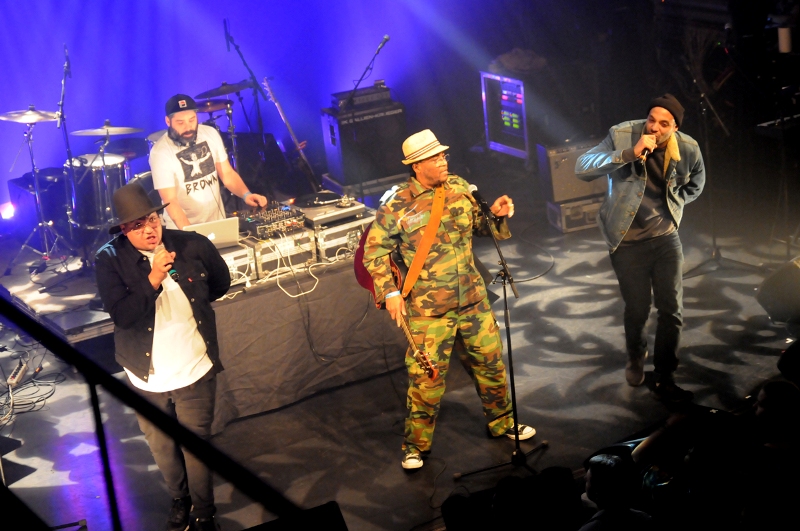 Oozing with positivity, father-son trio Brown seemed like a more than suitable act to have open up for Busty and the Bass. While such an idea might not appear evident on the surface, as the two acts are quite different, stylistically, their levels of energy are parallel to one another, making this pairing work so seamlessly. Sons Snail (Dead Obies) and Jam’s (K6A) silky smooth verses do such a beautiful job at complementing their pops’ “Shabba Ranks meets Sizzla” esque voice — he’s the true foundation of the group in more ways than one. Bonus points to their DJ for wearing a Nirvana Nevermind tee, revamped to fit their brand and aesthetic. (Mr. Wavvy)

Busty and the Bass

One of M for Montreal’s best attributes is their ability to showcase the city’s greatest rising talents in a major way. This was especially true of the festival’s nearly sold-out Thursday night event at Club Soda, in which Busty and the Bass performed their biggest headlining show to date. The band has come a long way since their Jazz Fest performance last summer at the much smaller Savoy du Metropolis. They’ve begun to distance themselves from covers (although one of Macy Gray’s “I Try” was definitely a crowd pleaser), and build a steady fan base within the city. Though the crowd didn’t sing along, they expressed their love by grooving and screaming the whole night through. (MW) 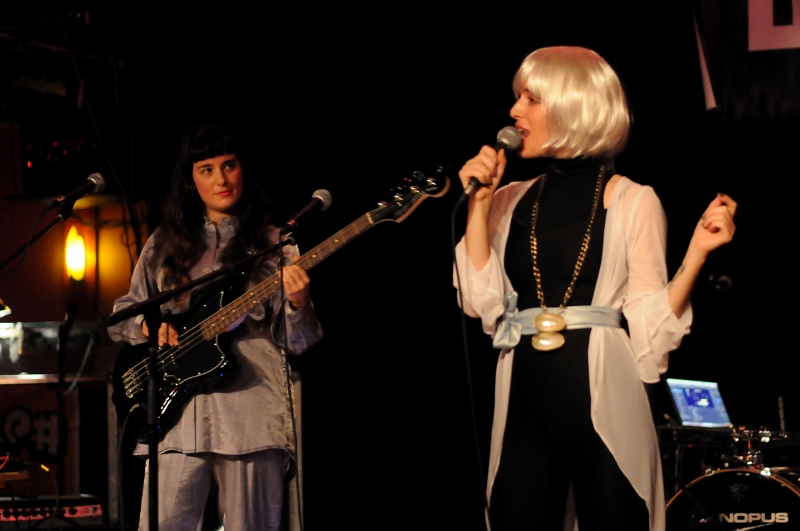 After several sets of male-fronted indie rock at Café Cleopatra, Montreal/Toronto new age/pop act Tasseomancy swept in like a warm breeze with beautiful vocals, gauzy synths and genteel guitars. Led by the Lightman sisters, one of whom was dressed in silk pyjamas, the other in a black leotard and platinum blonde wig, Tasseomancy are not entirely what they seem. Despite the levity of their sound and overall vibe, there’s a dark undercurrent in a lot of their songs, one that’s more obscured by surface prettiness and serenity than that of Kate Bush, who’s obviously a big influence. Bush’s quirks and dark streaks are clearly communicated, whereas Tasseomancy keep it corked, but ready to pop. (LC)

In what M for Montreal programming director Mikey B Rishwain referred to in our interview prior to the festival as “a grand finale” to cap off the francophone hip hop scene’s tremendous year, this packed Metropolis line-up was one for the books. Perhaps the most pleasant surprise of the festival was Rymz taking to the stage at the iconic, lively venue stage at precisely 12:15 a.m. for an unforgettable performance. What drew me in most to Rymz’s set was his stage theatrics: his fresh leather jacket, crowd surfing, series of special guests, Shash’U’s illustrious backing as his DJ and, best of all, two hypemen waving around “Vie de Renard” flags, Rymz has a clear understanding of how to keep his fans engaged. No, he may not be a lyrical mastermind, with rhyme schemes often resembling Desiigner, but there is certainly something to say about having your audience more won over than most international acts who hit Metropolis. (MW)

Although Montreal’s electronic scene has been thriving over the past few years, one can’t help but notice how much of a boy’s club it is. Luckily, DJs like Remeti — a member of the otherwise all-male Dirty Crooks collective — are here to break such molds, and in a refreshing way at that. It can be difficult being the first to spin for the night, the often half-empty and disengaged rooms make most DJs feel as if crushing the wheels of steel is an impossible feat. Luckily, this was not the case for Remeti, who built up the growing crowd with Trap scorchers from the likes of Flume, Soulection’s Losco and many more.

As somebody who has been following Tibe’s career since his early days, it warms my heart to see how much he’s progressed on an artistic level. Since his beginnings, Tibe has always taken himself rather seriously, but things were not always so seamless when it came to hitting the turntables. Now, all but two years since his official debut, it’s safe to say that the young producer has found a sense of comfort with his abilities. In his second consecutive time opening for Baauer, Tibe offers a tight-knit set, painting a picture for the audience as he spins away. (MW)

Baauer has come a long way since the days of the “Harlem Shake.” Although the Philly-born beatmaker still plays an updated edit of the song towards the end of his set, his Newspeak set proved that he is far more than just a silly gimmick. This performance resulted in the highest crowd energy I witnessed throughout the festival. When it’s 2 a.m. and the venue’s ceiling is subtly dripping cold water, this usually means one of two things: the venue has serious leakage problems, or fan-derived condensation. Luckily for Baauer, his ceiling situation was due to the latter! (MW) 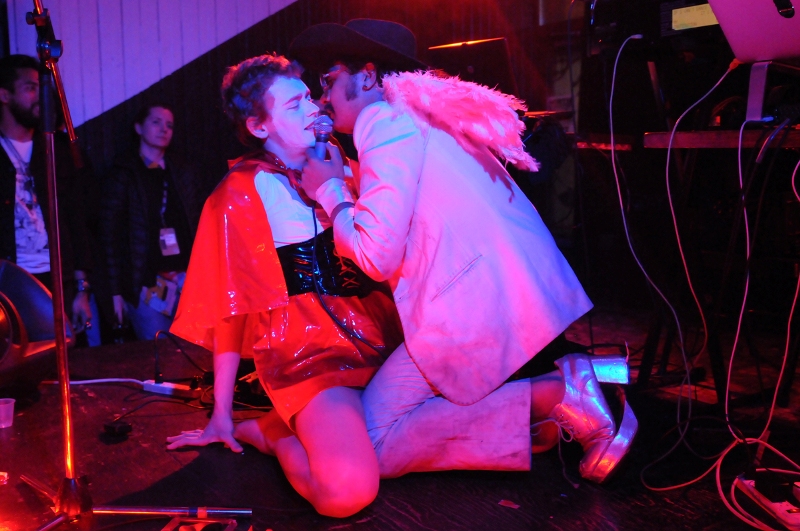 A completely bonkers Rocky Horror-esque pansexual mise en scène where bandmates made out with mouthfuls of miniature American flags to a steady soundtrack of Italo-disco. The titular moustachioed frontman, in platform shoes, bowtie, a cowboy hat and eventually little else did nonsensical spoken word in both official languages while his Little Red Riding Hood backing duo played on laptops and mixers behind him. It wasn’t long before the stage was littered with props from Femminielli’s suitcase. Beer was spilled on stage, an acoustic guitar was smashed inches from my face and Bernardino’s balls were seemingly hanging from his short shorts, but amid all that carnal calamity and sopping wet props, his amazing 2016 album Plaisirs Américains managed to push through the fog from the machine he brought and served as the perfect brain melting accompaniment to all that was happening on stage. It’s hard to shock in this day and age, but Femminielli left those courageous enough to get close with a lasting impression. (Erik Leijon)

While their unashamedly sleaze-rock vocals haven’t changed, since they played M 2014, this local four-piece seem to have segued from a post-Velvet Underground sound to the post-punk/new wave axis, a sonic palette they showcased throughout their Saturday night show at Matahari Loft. (If you’ve listened to their new track “Lush,” you’ll hear what I mean.) Heat being the first act of the night, the room wasn’t exactly electric as the set began, but the show picked up steam as it progressed, and as more people arrived to groove along. One track in particular — a new one, presumably from their forthcoming album Overnight, which comes out in January — got the crowd riled up with a surprising mid-song shift and driving, hypnotizing beat. All signs of good things to come, and the promise of a proper headlining show is something to look forward to in the new year. (LC) 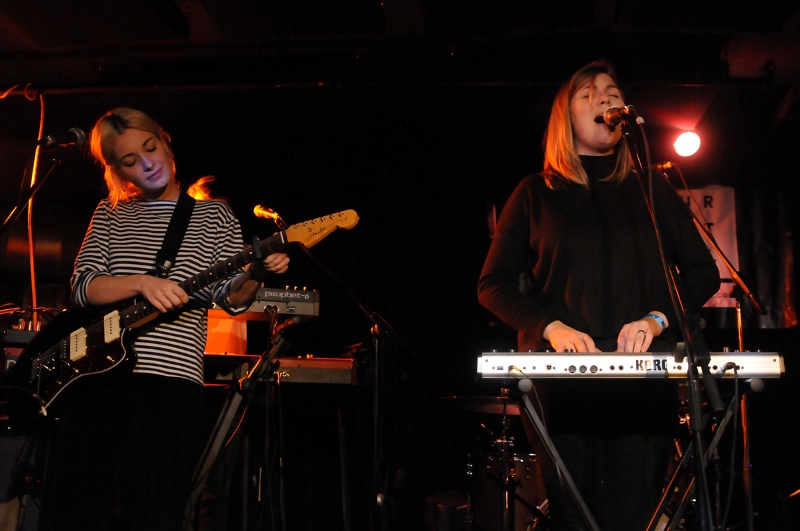 The four acts featured during Saturday night’s Quebec City showcase suggested there’s a distinctive new sound coming from la Vieille Capitiale. Watching violinist Ghostly Kisses, the demure disco kids Men I Trust, soulful pop vocalist Liana and Quebec-singing-superstar-in-waiting in Gabrielle Shonk all play positive, upbeat sets in quick succession was the dimly lit venue equivalent of curling up on the couch with your sweetheart. I’ll cheat and say dual-vocalist quintet Men I Trust was my highlight — if only because I’ve been air bass-playing to swoon-worthy 2016 singles “Lauren” and “Humming Man” all year — but they wowed me even beyond my lofty expectations with their immaculately paced grooves. How else to describe their confidently calm homebody sound other than Netflix & Chillwave? It’s no coincidence, after all, that two of the four acts covered lovey dovey-style Drake (“Hold On” and “One Dance,” if you were curious). (EL) 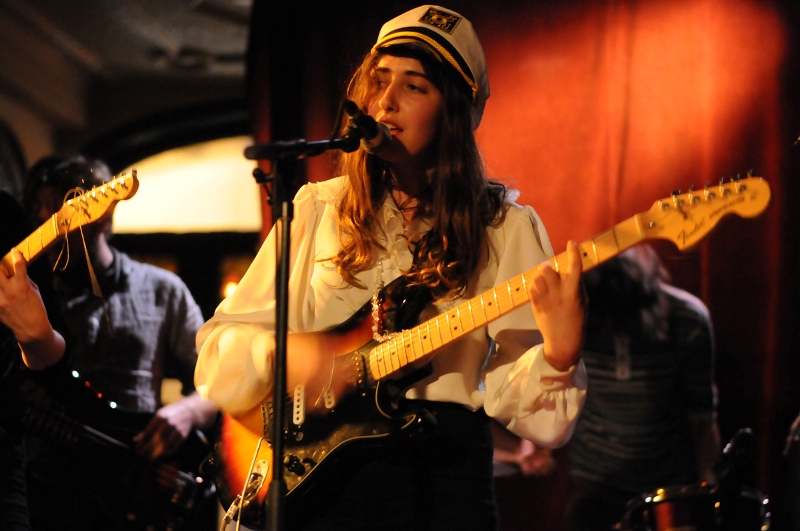 Sandwiched between Halifax psych-rock band Walrus and local experimental/indie bro Alex Calder, Australia’s Gabriella Cohen was a fitting segue act, with an eclectic sound that could probably bridge any number of bands. Cohen emerged on stage at Quai des Brumes with a female bandmate (a violinist and back-up singer) to harmonize in neo-folk fashion on a couple of tracks before bringing out the full band to play girl group pop, blues rock, garage and indie, all tied together by Cohen’s voice, as versatile as that also is — at times she struck a Hope Sandoval chord with a slacker drawl, at other times she sounded like a commanding pop singer. Despite an extremely annoying drunk heckler up front, this was a fun set in just the right kind of intimate space. (LC)

Midnight on its final night of the festival was at this moment I decided to personally retitle it “M for Me Avoiding Adult Responsibilities and Reviewing Concerts Instead.” In terms of a final stretch, Hot Chip’s DJ set seemed like more than appropriate for one last get-down before I threw in my hat. This was by far the oldest crowd of the festival, with many attendees clocking in at over 50. The look on most of their faces indicated that they came to see a band they love, and stayed to feel confused, upset and uncomfortable! However, this was nothing to do with the quality of the show, but rather that said folks were probably expecting to hear more of Hot Chip’s own material.

Although the older demographic had some issues getting into it, their set wasn’t all that far removed from the band’s style, with members Joe Goddard and Owen Clarke throwing down house music (with hints of nu-disco) all night long. While interludes of trying to speak French were utterly horrendous, their song choice and DJing abilities more than made up for it. (MW)