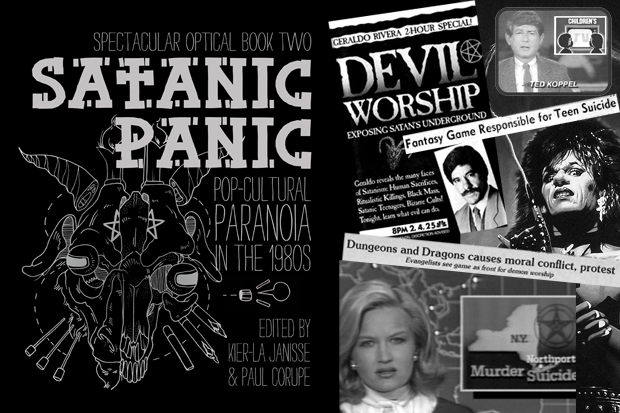 The publishing arm of Spectacular Optical, the blog/journal run by Kier-La Janisse (formerly of Montreal’s Blue Sunshine Psychotronic Theatre) and Paul Corupe (of popular blog Canuxploitation!), launched at last year’s Fantasia festival with the publication of Kid Power!, a collection of essays focusing on children in cult films and television. One year later, Spectacular Optical unveils its second tome, Satanic Panic: Pop-Cultural Paranoia in the 1980s. The collection of essays focuses on the rash of Satanic scares 30 years ago, when hysteria pertaining to the supposedly Satanic nature of things like Dungeons & Dragons and Judas Priest records sent the pop cultural world into a tizzy. The book features essays on topics like Christian metal and punk, Joe Dante’s film The ‘Burbs, the erotic horror paperbacks of Russ Martin and teen killer Ricky Kasso as well as an essay on the wave of Satanic panic in Quebec, co-written by Cult MTL collaborator Ralph Elawani and Gil Nault.

We caught up with Janisse to discuss the book, which has its second official Montreal launch at Drawn & Quarterly tonight.

Alex Rose: When we first spoke last year, you had just launched Spectacular Optical as a publisher.How did the first year match up to your expectations?

Kier-La Janisse: Spectacular Optical is just a hobby press, so in that sense it’s doing fine. I self-distribute the books with screenings or events, which allows me to travel a lot, and I’ve unloaded at least half of the Kid Power! books just from doing that. Many people took some cajoling to see how its contents were relevant to their interest in cult films, but usually once they picked it up and flipped through it, then they would want it. It is a very cute book and I’m proud of it.

AR: What was the impetus for this second book?

KLJ: Satanic Panic was one of many ideas Paul and I tossed around, and what determined its place as our second book was a combination of wanting to do something that was the complete opposite of Kid Power!, but also that tapped into a very obvious resurgent interest in the ’80s-era Satanic Panic, especially among people our own age who remember it well and have enough distance from it now to be able to look back on it with a different critical perspective.

AR: Growing up in the era of Satanic Panic, what was your personal experience with the “movement?”

KLJ: My first knowledge of it came from the furor surrounding Dungeons & Dragons in the early ’80s. My cousin played it, my uncle wrote supplements for it, and I grew up in Windsor, so the James Dallas Egbert story – the University of Michigan student who disappeared into the tunnels beneath the campus because the game had allegedly rendered him incapable of separating fact from fiction  – was in the news when I was a kid. And my mom wouldn’t let me have Crest toothpaste because it was made by Procter & Gamble and it was rumoured that they were Devil worshippers. Aside from that, when the famous Geraldo special aired in October 1988, I was in a reform school in Winnipeg and my cellmate was a 14-year-old Satanic prostitute, at least according to her. I never saw her doing anything that looked Satanic, although she did wear black lipstick!

AR: What was the selection process like for the book? I have to assume you went in expecting a certain number of the topics that were covered, but how unexpected were some of the submissions?

KLJ: We did a combination of invitations and open call, and some invitations we sent out quite late as we realized we were missing things and sought out experts in those areas. We probably got a dozen submissions from people wanting to write about heavy metal, and we had to whittle that down to three that each approached it from a very different angle: one looking at heavy metal horror movies, another on the Filthy 15 and the PMRC Hearing, and one about the rise of Christian metal and the skepticism about it from both religious and secular groups.

Two of my favourite pieces were anecdotal, and so they were surprises in the sense that no one else could have written these pieces except for these authors, and both had to do with the writers’ firsthand experiences with Christian celebrities at the time – one being author/singer/radio show host/exorcist Bob Larson and the other fallen evangelical comedian (and self-proclaimed former Satanic high priest) Mike Warnke. But the most surprising thing about the book was that I came away from it obsessed with weird Christian horror movies and music! I now have like nine different versions of the theme song from A Thief in the Night, which was referenced in one of the chapters.

(Kier-La later sent me the following version of the song.)

AR: Were there any challenges inherent to the publication of this book? In the last book there were lots of interviews with principals involved in the films and other works. I would assume they are a little more reticent to own up to being involved in some of these films.

KLJ: Well, the book isn’t just about films. A lot of it is very heavy, so I feel lucky that we got the interviews that we did – needless to say a lot of people don’t like to talk about these things because there is a lot of pain and sometimes humiliation involved – you have to remember people went to jail, children were hurt, teenagers killed themselves or others. So despite the sometimes comical aspects of the hysteria, there is very real trauma there. So I feel honoured that we got an interview with Zeena Schreck (formerly LaVey) and Genesis Breyer P-Orridge. We did reach out to Mike Warnke, some of the Christian VHS labels and a few of the film directors and got no response. Bob Beeman from the Sanctuary Church wanted to participate but he was out of town and got our message too late.

AR: What’s next on the Spectacular Optical docket?

KLJ: We have a couple things we’re in the very early stages of that I can’t jinx, but honestly we have a list of 20 potential books that would all be exciting to us, so as long as we can keep it sustainable, we can promise an awesome book each year. ■