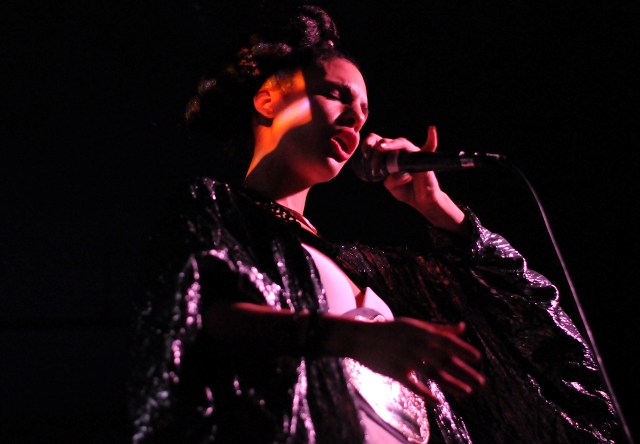 That’s a wrap! M for Montreal 2014 ended its four-day parade of homegrown music (with guests from TO and NYC, too), leaving a pack of exhausted and hungover international delegates in its wake (and likely puking all over multiple Air Canada flights yesterday). As for the Cult MTL crew, we held up under duress to bring you the following reviews and photos — read up on a (mostly) awesome week of sights and sounds, and feast your eyes on the gallery that follows.

La Sala Rossa is a room that holds a lot of history for Dan Boeckner. As someone who has been a long-time fixture of the Montreal music scene (even though he doesn’t live here currently), he’s played there numerous times with previous outfits such as Wolf Parade and Handsome Furs. If he was feeling the weight of that history or expectations, he sure didn’t look it when Operators took the stage on Friday night. Dressed in a finely tailored black suit with an open collar (along with the rest of the band who were equally well-attired), Boeckner was grinning from ear to ear throughout the night.

Even though drummer Sam Brown seemed to be plagued with sound issues from his monitor throughout the set, no one in attendance seemed to be able to hear it and cheered the band on all the same. People danced exuberantly through early set highlights such as “Ancient” and a delightfully raucous rendition of “Start Again,” both taken from EP 1, which was released earlier this year. The band even slipped in a few unreleased cuts, culled from the same weeks-long recording sessions at Montreal’s Hotel2Tango studio last winter, that sounded similar to the synth-driven dance sounds that we have heard to date.

The night ended rather unexpectedly with a short two-song encore that reached its climax with a wonderfully shambolic cover of “Where Eagles Dare” by the Misfits. Multi-instrumentalist and singer Devojka took over lead vocals while the rest of the band, which also included ex-Hot Hot Heat and USA Out of Vietnam member Dustin Hawthorne, bashed out the tune. By the time the audience realized that we were, in fact, hearing Operators playing a well-trodden punk standard, it was all over. (Mike Sallot)

When electronic duo Beat Market, Montreal’s own little Daft Punk, bounded onstage at Lambi decked out in head-to-toe sequins and glowsticks, I knew we were in for a good time. The pair quickly got down to business, with Louis-Joseph Cliche’s keyboard magic joining forces with live drums from Maxime Bellavance, creating a super charged, high energy party atmosphere that got everyone in the room on their feet and jumping around. If you have any cares in the world, just take one look at the huge grin on Bellavance’s face when he hits his stride on the skins and you can’t help smiling right back as you dance your troubles away. By the end of the pair’s set, the crowd had jumped on stage, becoming part of the performance as the band and the dancers fuelled each other on into an ecstatic explosion of positive energy. Next time you see this band on the marquee, get your dancing shoes on and get ready to feel good. (Lisa Sproull)

I was curious to see Secret Secret Girl mainly because of the involvement of one of Montreal’s true characters, Beaver Sheppard, whose restaurant Bethlehem XXX gives plenty of evidence for his skills at creating things that are completely original, totally enjoyable and more than a bit weird. On stage at Lambi, Sheppard and bandmate Pascal Oliver were all of these things as they performed their dark, synthy lo-fi soundtrack in ghostly costumes — Oliver with his guitar and keyboard facing away from the crowd in black robes topped by a crying-mime mask, regarding the audience like a silent high priest, with Sheppard, his tormented bride wailing into the microphone while tangled in a lacy white shroud as the crowd danced on. (LS)

Club Lambi, Nov. 21
Things took a darker turn at Lambi when Technical Kidman took the stage, with their heavy, purposeful sound compelling you to take things a bit more seriously. Having been impressed by the trio when they opened for Suuns at the SAT last summer, I knew they were capable of incredible intensity, and seeing them in the more intimate space at Lambi was even more jawdropping. The power behind drummer Pierre Luc Simon’s live performance is evidenced by the sight of his cymbals being literally ripped to shreds by the force of his playing, open-mouthed with sweat flying. Simon’s driving rhythms are matched in potency by frontman Mathieu Arsenault’s vocals, urgently delivered with outstretched arms, taking over every inch of the stage as the performance builds in ferocity to a stunning climax. Keep these guys on your radar, as they’ll be releasing a new full-length album soon, which will certainly mean more opportunities to see them kick ass live on a stage near you. (LS)

If Arcade Fire’s post-Reflektor downtime ends up lasting as long as suggested, then at least we might have Win Butler DJing in grimy lofts around town to maintain brand recognition in the meantime. He turned up Friday night at the cramped St-Laurent Blvd. apartment-venue for an unofficial M afterparty, with a heavy soundsystem, a bottle of Jameson and two percussionists (one on snare drum and another on djembe/bongos) in tow. Among other things, he played CBGB faves “Psycho Killer” and “Rapture,” as well as Roxy Music’s “Love Is the Drug.” He closed his 1:30 a.m.-3 a.m. set by alternating back and forth between Carly Simon’s “You’re So Vain” and Kanye West’s “I Am a God.” Infer what you want from those selections, or don’t, since it was a fun shindig and it’s best not too overthink such parties. The live percussion was a nice touch, though. It was a solid line-up all around before the cops arrived, with Pierre Kwenders in the warm-up slot and WCT, VNCE from Dead Obies, Rilly Guilty, Brounchies Babies and Tommy Kruise. (Erik Leijon)

Walking into Petit Campus at 3 in the afternoon on Saturday, I was immediately hit by heavy vibes. In Twin Peaks terms, it felt more Fire Walk With Me’s Canadian sex bar than the relative innocence of the TV show’s Roadhouse. Marie Davidson and Pierre Guerineau are a hot husband and wife team whose commanding synth emissions, reverberating riffs, cracking beats and deadpan his ‘n’ hers vocals are total class. The initial sleaze-rock atmosphere gave way to chilly early ’80s synth-pop with a hit of early-aughts electro. Think Visage fronted by Miss Kittin en français. Rad. (Lorraine Carpenter)

Clad in a skeleton onesie and emitting enough nervous, near-manic energy to fuel a small vehicle, multiple-threat musician and songwriter Klô Pelgag dominated the stage (while seated, no less) and led her chamber pop ensemble through a short stack of pretty tunes that also showed off the young Québécoise lady’s virtuosity. Watching her work from above, on Café Campus’s balcony, was the right way to do it — I don’t know her backstory but if I had to guess, she probably taught herself to play; I bet she just “gets” the piano. And these skills are probably already paying the bills. (LC)

It was my first time seeing APigeon, an arty R&B/synth-pop act whose recorded material is alluring enough as it is, but her sound got a big boost live. Then there’s the visual presentation: APigeon herself was draped in shimmering silver, clad in what looked like a wrestling champ belt, wearing steam punk spectacles, dropping some smooth choreography (with her bud Sabine, in a finale that the guys in the crowd should remember for a while) and the right amount of drama, hype and tribal whooping to get her point across within the limits of a 25-minute showcase. And it wasn’t a dry industry-dominated affair; it was a packed Saturday 5à7 during a messy snowfall. But if there was an industry presence in the room, I’m pretty sure she passed that audition. (LC)

It was the tale of three pianos for the German instrumental composer. Any watch will tell time, but Frahm is a fancy Rolex: a triumphant display of precision with an added superior sense of style. He’s also a bit like our own Colin Stetson, as they both draw in listeners with visceral repetition before striking hard with expertly deployed variations. Frahm uses his physicality onstage, and some nifty Cardassian interrogation room lighting, to add drama to his arpeggios. Only two out of his three pianos, which were placed on stage in a “Z” formation, really hit their mark. The baby grand and electronic setups were forceful and each note was felt. The upright piano – vivisected so one could see the innards at work – showed his softer side (or cheesy, as he called it in one instance), but he was a little too precious with it. It couldn’t compete with the restless crowd’s chatter. (EL)

The evolution of this band from giddy go-getters Goosehut to punchy indie pop juggernaut (with a melancholy streak) How Sad, with a Taylor Swift/Miley Cyrus drag act somewhere in the mix, has been smooth and satisfying. The latest line-up, which features a drummer and two members of the band Wake Island on keys and percussion, with frontman/founder Harris Shper on vocals and guitar, is a pleasure to watch. The first half of their set was made up of new shit, and a couple of those tunes gave me goosebumps (for real), then they shed the drummer and played the hits in the second half. The glee on the band’s faces and the energy of the set was a better pick-me-up than any amount of caffeine or illicit stuff that was probably being consumed  in the room. (LC)

We wrote about the initial M set by this band in our first round of M 2014 reviews, but I’ve got to give another shout-out to Beaver Sheppard and “Mr. Lavender” for this synth-tastic goth/industrial party machine with a comedy act on top. I liked it so much that I bought their super-creepy $15 t-shirt. Trill. (LC)

Bleary-eyed, -eared and –brained is typically not how one wants to enter le Belmont on a night when the party vibes and music skew younger and louder. Luckily for M attendees on their last legs, fest closer les Sins, aka Toro Y Moi’s Chaz Bundick in dance-mode, stuck mostly to mixing lighthearted house fare during his 1:30 a.m.-3 a.m. DJ set. The springy kitsch of his recent album, Michael, as well as choice cuts like Reality’s Yolanda made for a refreshing nightcap, although it wasn’t so easygoing that the tightly packed venue couldn’t bounce till last call. Fashion be damned (the only track to immediately garner a reaction was Missy’s “Lose Control”), Bundick played what he wanted, and we were all better for it. (EL)