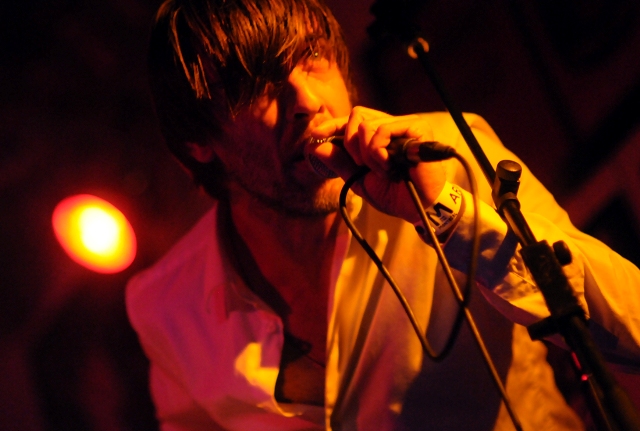 Operators. Photo by Cindy Lopez (scroll down for a full gallery)

The M for Montreal festival is on in a big way right now, with 19 shows today and tonight and almost as many on the way tomorrow. You can check out our recommendations for the the remainder of the festival here (and in our daily To-Do List), but first, here’s a rundown of the action so far:

It’s been three years since the release of Laurel Sprengelmeyer’s debut as Little Scream, so this M for Montreal showcase event was a chance to get reacquainted with the songwriter and guitarist. With a backing band that included Unicorns’ Jamie Thompson on drums, Little Scream debuted what she’s been working on: emotional, driving road rock with deliberate, subtle arrangements. The group ended the set with a nu-disco dance number which perhaps didn’t fit the rest of the set, but was an undeniably fun closer nonetheless. Based on the performance, one hopes some of the rock edge finds its way onto her next album. (Erik Leijon)

Back in the day, one of the Best of Montreal lists I couldn’t help but fast forward to was “Best Montreal Weirdo.” In this new era of cultural sensitivity on the Internet, it’s been put on the back burner, but I don’t think it would be undignified to suggest Country frontman Beaver Sheppard is one of Montreal’s premier eccentrics. He’s served me deep fried calf brain from his restaurant (Bethlehem XXX) and when it comes to his mutated ’80s synth music with Country, his agonized Robert Smith wail has entranced me both on record and live. Country’s album, Failure, is legitimately one of the best local releases of 2014, if you can get past the constant hissing in the background. Funnily enough, there’s even more ear-bursting white noise live. Sheppard’s banter was nonsensical, and he wore a snug white hoodie that made him look like the Michelin Man. Country are meant to be weird — to heck with political correctness — and on this night their rough edges were pushed to the forefront. (EL)

M for Montreal has always devoted about a quarter of its programming to imports from the Toronto scene, but Gothenburg seems a little far afield. Thing is, Holy Family is a Swedish duo whose project came together in Montreal — officially they’re based between here and their hometown, and recorded their album Can’t Dance, Won’t Steal, Need Some Help in both the cities.

In any case, Anton Ekman and Viktor Hansson played some hearty slow jams during their afternoon set, dealing out affective melodies with steady hands and building to just the right level of peak — other acts with less restraint could’ve spun similar tunes into massive emo epics that feel like those stock 21st century movie scores that are so prevalent right now.  These guys seem to know how to hit the right balance between the familiar and the novel, the real and the sentimental, and they sound really cool doing it. (Lorraine Carpenter)

This Montreal-based four-piece was first up at Cleopatra on Thursday night, laying down a tight, powerful set that cranked up their sound significantly from their recorded material. The ’90s is the shit right now, so I understand the buzz around these guys: Heat evokes the American indie rock scene that proliferated away from the spotlight on grunge and the “modern rock” garbage that followed. But you can link it all back to the Velvet Underground, through the Modern Lovers and Pavement and Luna and mid-period Jesus and Mary Chain (token Scots), even all the way up to the Strokes (circa their first album, anyway) — a band that Heat shares some of their more poppy tendencies with. They’ve got some very memorable melodic riffs in their corner, that’s for sure. It’ll be a treat to watch them grow. (LC)

This Toronto noise funk act is fronted by a woman who seems to channel some weird Pere Ubu energy — she twists clean and clear vocals into warbles and clucks, and her mannerisms follow suit — she waddles around the stage, waves robotically at different sides of the room and plays with her clothes. You could say that it’s all a little self-consciously oddball and off-kilter, except it doesn’t feel like a put-on even if it is technically an act. Given the tight group dynamic and powerful tunes, it’s a feat that it all feels so natural. (LC)

Fronted by twin sisters (who happened to be celebrating their birthdays), the Muscadettes played a really fun set of muscular surf rock, or pop music made by musicians raised on old-school punk rock and all things alt. It would be easy to compare them to other female acts like the Runaways — I have to admit that my mind involuntarily flashed back to Shampoo, but that’s a purely aesthetic issue — though the band doesn’t shy away from those associations too much, covering Blondie and all. Sure they’re pretty, and I hope that helps them get ahead (musicians these days need as much boosting as possible), but more importantly, they’ve got a few killer songs to their name, and there must be more where that came from. (LC)

Every time the sassy Regina the Gentlelady hops on the Megabus to Montreal, it sets my heart a-flutter. The drag alter ego of Gentleman Reg keeps a setup that fits in a backpack — the electro-disco backing beats are pre-recorded — but the Light Fires experience is more about strutting one’s stuff in heels anyway. If you remember short-lived white-clad local duo Homosexual Cops, you’ll get the gender bending camp and direct pop songwriting of Light Fires, although in this case everything here – especially Regina’s mesmerizing gyrations – is pushed to even more extreme levels. If a leggy electro-pop drag queen singing about getting divorced can’t get you smiling and dancing, then there’s simply no hope for you. (EL)

A trio of sleeve tatted gents in Army of Two hockey masks remixing dubstep tunes made for a shocking sight initially, but given the city’s young person party scene these days, it’s really no surprise a troupe that combines aggro EDM with video game fashion sense would emerge from NDG. The three primary ragers — all clad in gear with the group’s crest – operate on laptop, drum machine and guitar, respectively. They were masked, as were the secondary ornamental ragers, save for an official raging photographer in denim. There was also an unmasked rapper and hypeman who took the stage a couple of times. Cleopatra’s at 2:30 am was not a home game for them, but one suspects they do well at parties with their intended demographic. The garish outfits distracted a bit from their remixing work, which reworked current day hits from ILoveMakkonen, Grandtheft and Young Thug in predictable ways. (EL)