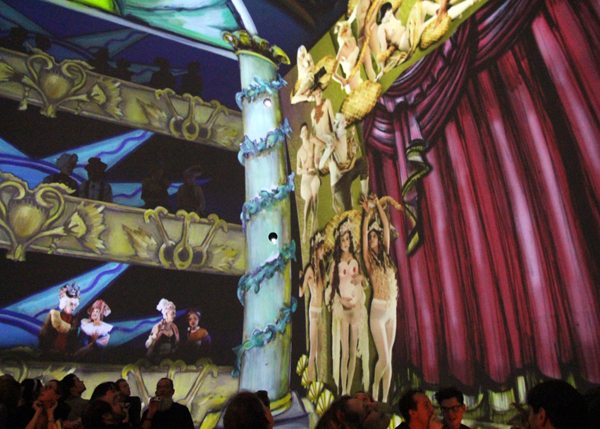 The melodic strains of a baroque string arrangement float across the room as guests mingle in the atrium of the SAT. Fine ladies in elaborate, full skirted dress, their superlative powder-white wigs curled to perfection, glide through the crowd, hinting to us what’s in store as we prepare to enter the parallel universe also known as the Satosphère.

Once inside and seated at tables arranged around a centrepiece spread of loaves, cheese, fruit, nuts and pâtés, the lights dim, the music begins and the Satosphère comes alive, transporting us to an 18th century Parisian opera house.

The music is illustrated with an impressive, immersive visual projection that’s thoroughly engaging and awe-inspiring — you won’t want to blink, and you’ll wish you had eyes on the back of your head just so you could see it all. The projections tell a series of 10 stories, acted out by vocalists like Caila Thompson-Hannant (Mozart’s Sister), Peggy Hogan (Hua Li), Alexandre Bergeron (Year of Glad) and Ohara Hale (Mori, Nancy Pants). These narratives are inspired by Greek mythology (a popular theme during the baroque period), and updated with a little queer and feminist sassiness. Throughout the evening, our be-wigged and sumptuously costumed hosts and hostesses transfer the banquet from the centre table to the guests around the room.

The artists behind the project, Aleks Schürmer and Frances Adair Mckenzie of Party Like It’s 1699 have staged a version of the Pop d’Époque before (see Cult MTL’s coverage of the 2013 event here), but this is the first time it’s been presented in the Satosphère, allowing for a much more all-encompassing experience of sound and visuals.

I spoke with artist Zuzu Knew, who created costumes and worked on make-up and styling for the show, to get her take on what moving into the Satosphère has meant for the experience. “Party Like It’s 1699 at the Satosphère is comparable to a wonderstruck visit to the Planetarium, but in this instance you’re listening to the spheres conversing and you’re a fellow star or moon hovering and being swept up into different orbits.

“The switch from 2D wall projection of its last incarnation to a 3D dome experience brings the show to life in an all-encompassing way. We’re not just a passive audience simply watching a show, but active yet leisurely participants.

“More performances have been added since the last 2D version, notably Andrew Tay’s torso dancing as an animate sculpture, as well as Ohara Hale’s singing as Euridice. The last incarnation is now a skeleton, which has had so much intricate muscle added to fill up the Satosphère’s fullness that it has reached a new level of being.”

If you’re enticed by the idea of an absorbing, surreal spectacle — one that will leave you with a new appreciation for baroque music and art — do yourself a favour and check out Le Pop d’Époque during its three-week run. ■

Le Pop d’Époque is presented at the SAT (1201 St-Laurent) till Nov. 21, Tuesdays through Fridays at 7 p.m. Special presentations on Nov. 7, 14, and 19–21 include live performances and a banquet of light snacks prepared by the SAT Foodlab chefs. $18.25 for regular performances, $42.25 for special presentation nights.