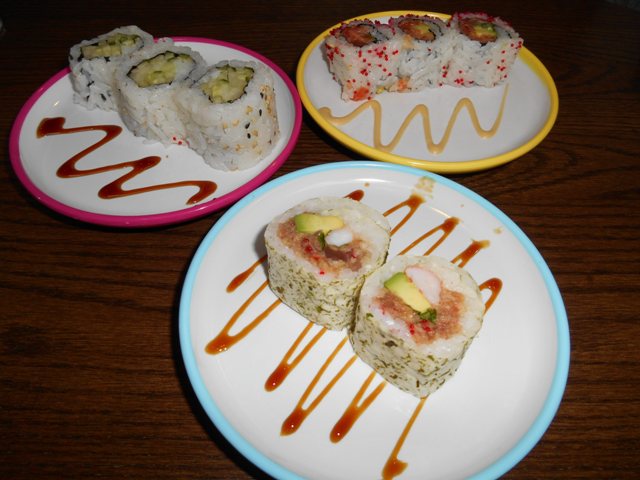 Sushi at Kyozon. Photos by Barbara Pavone (scroll to the bottom for a mini-gallery)

Crescent Street can be a tough sell, so walking into Kyozon was a really pleasant surprise. Free of tacky decor and douchey club vibes, the space is effortlessly cool, full of light and alluring design.

Kyozon means “to coexist,” a fitting moniker for a resto-bar with four distinct and complementary areas on two floors, each with its own personality.

On the main level, you can sit at the bar (made of 100-year-old barn wood) and enjoy a beer, some sake or a signature cocktail, like the Shojo Sour. A mix of Bombay Sapphire East, Midori, fresh lime, sesame oil and egg white, it has an almost neon green colour that I couldn’t help but be drawn to. If the Wicked Witch of the West had a go-to drink, this would be it.

If it’s food you’re after, you can choose a table or booth on either level and order from the pan-Asian menu, featuring dishes like fried calamari, popcorn shrimp, pad Thai, pork buns and edamame on tabletops that were also crafted with repurposed wood, this time from one of Canada’s oldest bowling alleys.

They may not be reinventing the wheel, but creating standout classics is no easy feat and Kyozon’s menu wins by delivering staples that are flavourful, simple and delicious.

Leather couches near the second-floor window create a cozy nook if you just want to get social with some snacks, but the undeniable star of the show is the kaiten belt rolling around the mezzanine. Is conveyor belt sushi really as awesome as it sounds? Hint: Yes. The automated server delivers everything from sushi to sashimi to salads, served in portions that are perfect for sharing. Their prices, ranging from $2 to $7, are based on the colour of the plate they’re on.

If it sounds fun, that’s because it is. When I attended Kyozon’s recent grand opening event, I strategically sat near the start of the kaiten, accessing the sushi first and scoring a view of the chefs in action through a glass partition. There was something ridiculously adorable about the whole set-up — I couldn’t help staying put to watch the little plates zooming along once I was done eating.

If you think it’s just a gimmick, though, let me prove you wrong with some facts: Yoshiaki Shiraishi designed and opened the first conveyor belt sushi restaurant, Mawaru Genroku Sushi, in Osaka way back in 1958, making this a tried and true dining style in Japan.

I’ll definitely be back for a night out, and for their daytime specials: I’m dying to try their $15 Bento lunch box and all-you-can-eat kaiten experience in the afternoon (2-5 p.m.). ■