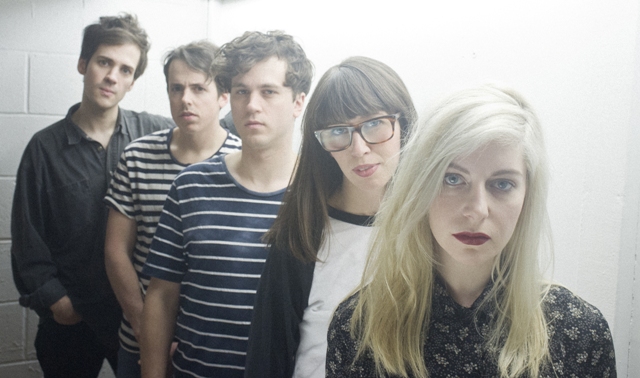 Although having a musical family is fairly common when you’re born in Cape Breton, Molly Rankin is the progeny of pros. Her father John Morris Rankin was a founding member of the Rankin Family band, the Maritime collective that released seven records of Celtic Canadiana between 1989 and 2009.

Molly took a different direction both musically and structurally, initially pursuing a solo career in the indie pop realm. When she met Alec O’Hanley (guitar), they began collaborating on her solo material in PEI, and soon brought in their respective childhood friends Kerri Maclellan (keyboards) and Brian Murphy (bass) and Phil MacIsaac (drums). After crafting some sonic magic togehter, they reassembled in Toronto to live their dream-pop dream as Alvvays.

Their self-titled debut album, produced by Chad VanGaalen, was released on July 22 by Royal Mountain in Canada and Polyvinyl in the U.S., but I spoke to Rankin a couple of weeks prior to that, as they were heading out on the road to NYC.

Lorraine Carpenter: I know you come from musical family, but what about the rest of band?
Molly Rankin: Kerri is from Cape Breton too, and there’s nothing really to do there if you don’t play hockey, so she grew up surrounded by music as well. It’s just something you do when you live in the woods, I guess. The boys were band kids, they played in jazz bands. Alec grew up playing trumpet and Bryan went to U of T for guitar.

LC: You’re obviously experiencing a very different music scene and industry than your family did. Have they imparted any useful wisdom?
MR: I don’t really see them that often, but it’s certainly not the easiest thing to pursue if you have any intention of having any sort of income. I did a cross-Canada tour with them when I was 18, but my education was a huge thing (for them) — they wanted me to have something to fall back on, which I don’t. So that didn’t really work I guess. But they’re not really pushy people — the girls went to Acadia to study theatre, so they’re kind of free spirits.

The Rankins weren’t the type of band that blew up, and because they were roots, Celtic folk-pop, I think there was a lot of confusion in how they should be marketed, so they weren’t like juggernauts as far as raking it in. My dad was a really subtle guy who coached my brother’s baseball team, and he was always in the barn fixing a snowmobile or something. We had a wood stove — that’s how we grew up. So the changes weren’t that obvious to me. I didn’t really see the glamour of that age.

But they did have tour buses and played huge arenas, whereas we show up in a bar and set up the PA and play for a beer ticket, essentially. So in that way it is pretty different for us (laughs). ■

To enter a contest to win tickets to the show, click here.