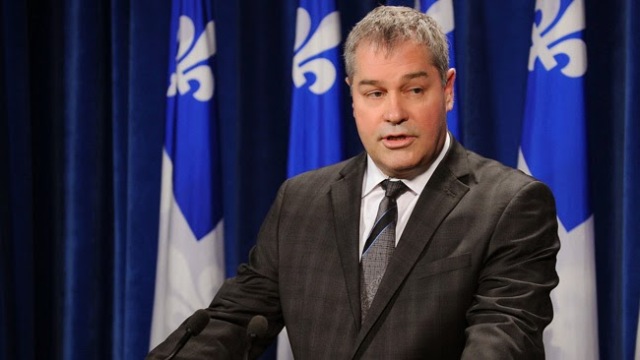 The Parti Québécois yesterday joined the chorus of voices calling on Quebec Premier Philippe Couillard to fire education minister Yves Bolduc if he doesn’t agree to reimburse the $215,000 in bonuses he received from taxpayers for taking on more than 1,500 new patients in his family medicine practice while sitting for 19 months as an opposition MNA.

As reported here last week, those patients were dumped back onto the long waiting lists for family physicians when the Liberals were re-elected in April and Bolduc returned to cabinet. Since taxpayers are now on the hook for an additional $215,000 in bonuses to the doctors who will end up picking up Bolduc’s jilted patients, a complete repayment is the least he should do.

That’s the only logical conclusion Couillard can reach after he admitted this weekend that the bonus program — which Bolduc set up while he was Health Minister in the Jean Charest government — “missed the target” by offering cash to doctors for simply signing up these “orphan” patients rather than paying GPs to provide them with long-term care.

Bolduc is one of 20 physicians who have reportedly come under closer scrutiny by the province’s health agency, the RAMQ, for the way they handled patients recruited for the bonus program.

Dr. Louis Godin, president of the Quebec federation of family doctors, told Radio-Canada that most physicians who used the program posed no problems.

“More than 4,000 doctors did it, taking on average 40, 50 new patients in addition to the work they were already doing. You have to look at this measure from that angle rather than the very particular situation of Dr. Bolduc, who took 1,500 patients.”

Bolduc and his cabinet colleague, health minister Gaetan Barrette, have tried to pass off that 1,500 patient case-load as nothing unusual, but according to the Nov. 2007 issue of the Journal of the College of Family Physicians of Canada, Dr. François-Pierre Gladu wrote at the time that “While general practitioners in the rest of Canada care for an average of 950 patients, general practitioners in Quebec care for an average of only 685 patients.”

So while Bolduc was also working full time as an MNA, his patient load was more than double the average of a full-time Quebec family doctor.

The “orphan” bonuses were not the only premiums Bolduc was racking up during his short return to full-time medicine. Since he was seeing many of these patients on evening and weekends, he made extra money for being available outside of regular hours.

As a seasoned medical-political insider, Bolduc knew how to maximize the return on his clinic hours, which he did with indecent enthusiasm.

Was any of this illegal? No.

Was it cynical opportunism? It’s hard to draw any other conclusion. Bolduc knew that the reason for the bonus program was to increase Quebecers’ access to family physicians.  He also knew that there’s a huge difference between a family doctor and a physician that you see only once or twice in two years. Given that he clearly intended to remain in politics, especially if the Liberals returned to power, it’s inconceivable that he ever intended to act as anything more than a caretaker physician for his 1,500 recruits.

That’s why he should return all the bonus money. And that’s why Couillard should fire him anyway.

Health and education are by far Quebec’s biggest budget items. How can we have faith in someone to act as the guardian of the public trust, to protect the system from those who seek to exploit it for their own gains, when he himself milked it to the max and after getting exposed still sees nothing wrong?

We can’t. If Couillard can’t see that, maybe his next cabinet appointment should be an optometrist.

So did Bolduc say he’ll give his ill-gotten gains back today? No. He just said that he will repay 50 per cent of the money he collected for patients that he didn’t see for the minimum 12 months, which RAMQ will force him to do anyway.

The only thing “new” is his promise to donate to charity the 50 per cent he ISN’T required to pay back. (Which he will of course deduct from his taxable income.)

Not near enough. Couillard should still fire him. ■