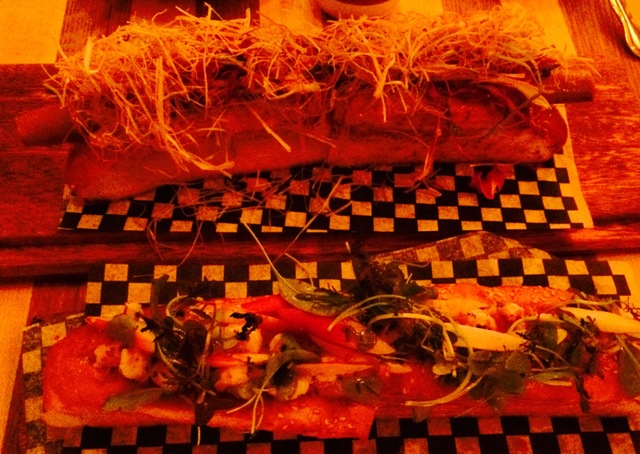 The Main has a new late-night upscale casse-croûte and oyster bar. Majestique is the brain-child of chef Charles-Antoine Crête, formerly of Toqué!, and Richard Holder, who is also behind Bar Waverly, Brasserie Bernard and the Holder restaurant in Old Montreal. The resto-bar has a lot to live up to given the brain trust behind this venture.

Majestique is housed in the building once home to the Lesters hot dog factory, and to the former site of a Jewish deli counter that served smoked meat — the retro Delli-Cité sign still stands outside. The interior decor is also a wink to the past, with a long deli-counter and kitsch items such as the lights from the old Lesters factory, along with knickknacks and old beer bottles. The bathrooms are like stepping into a time machine set for the 1950’s.

The menu follows suit, its centre-piece being  a 12-inch hot dog for two.  But this foot-long dog bears little resemblance to the steamé or the toasté of a Quebec-past. The sausage comes from the milk-fed pigs at Gaspor Fermes St-Canut. The bun tastes like liquid butter, and it’s topped with fried leeks, apples and pickled cabbage. The acidity paired with the buttery bun is magic, and it better be, at $22.

While the hot-dog is gigantor, the menu mostly consists of small shareable tapas-style entrées. My favourite was a simple off-the-menu special of the most perfect asparagus with parmesan molten on top.

But I’m jumping ahead. We started things off with a dozen oysters paired with Petillant Naturel Bulles Blanche 2012. The house shucker came to the table to describe the offerings, and we settled on six Ducksbury from Massachusetts (a tiny hyper-salty number that will satisfy anyone who likes it briny) and six oysters from Nova Scotia — these were of the big, fat and juicy variety. The oysters were served with fresh horseradish and both classic and an apple Mignonette, but the show-stopper was the Peach Hot sauce, which came in a glass eye-drop bottle.

Next up, we tried the salmon confit with popcorn salad. I was expecting some sort of popcorn-looking vegetable and was delighted when my fish came with actual popcorn and a sauce not unlike molasses drizzled over top.

The bourgots with seaweed butter is a must. Bourgots are the Québécois cousin of the escargot and the mollusk is harvested fresh from right here in the Gaspésie.

We also sampled the sautéed fiddle heads with boar bacon, which I know I will come back for again and again.

The tostada with sushi rice and tomatoes and seaweed was also a winner. It was glued together with sushi mayonnaise, one of the best vegan options I’ve ever sampled.

It’s now time to hit you over the head with the hammer that was dessert: rhubarb compote with sablés and chantilly cream. Sablés are the most perfect biscuit: cold butter, flour and sugar are rubbed together until they reach the consistency of sand, then you add an egg. The dessert was heaven, although I would have preferred less sugar in the rhubarb. I’ve never understood why people always try to stifle rhubarb with sugar or strawberries. Please let the rhubarb breathe — it’s perfect as it is.

Although our shucker was attentive and came as soon as summoned, the waitress never made her presence felt. Eventually we ordered from a kind, smiling bus girl who took pity on the hungry arm-waving group. The food we ordered after our oysters also took more than 30 minutes to arrive. All would have been forgiven had we been seated later in the evening, when Majestique gets slammed, but we arrived early, just before the dinner rush, and there were only a handful of tables to manage.

I’ll return to Majestique despite the slow service — as a Montrealer, I’m somewhat resigned to long waits at trendy restaurants. But mostly I’ll return for the food. ■

No reservations — seating is first come, first served. Call ahead for a large group.

“Charging people to take public transit during the era of the climate emergency is stupid, particularly given that we should be trying to incentivize people by whatever means necessary to stop driving their cars.”

The Toronto rapper was a surprise guest during Lil Baby’s headlining Saturday set.