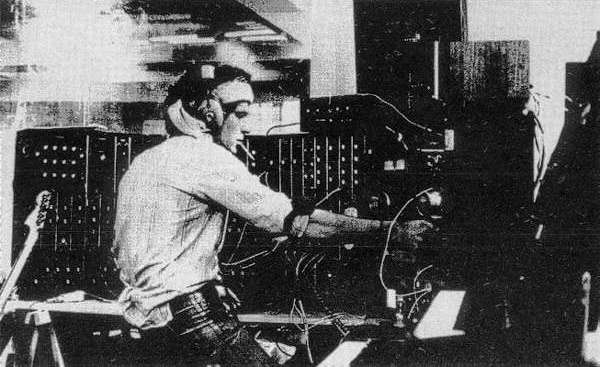 The curators of the Victoriaville festival (FIMAV) haven’t pulled any punches this year, putting together what may be their most impressive program ever for their 30th anniversary edition. Artistic titans like Meredith Monk, Marshall Allen (Sun Ra), Fred Frith and Evan Parker have been at it longer than most of us have been alive. Not only are they still out on the road performing (and killing it) but their ever-forward-thinking work makes their younger peers look tame by comparison. Even amongst such greatness, the quartet of Masami Akita (Merzbow), Keiji Haino, Tatsuya Yoshida (Ruins) and Richard Pinhas promises to be legendary.

Richard Pinhas’s 40+ year career includes studying philosophy with Gilles Deleuze (and having the foresight to tape his lecturers), writing about Nietzsche and sci-fi, collaborations with sci-fi writers Maurice G. Dantec and Philip K. Dick, leading the pioneering French electronic rock group Heldon (often compared with Tangerine Dream and Fripp & Eno), and dozens more solo albums and collaborations since then. Like Fripp, Pinhas learned to channel his guitar playing through multiple delay units to produce a sound rooted in repetition and texture.  With his group Heldon, he carved out a space in France for electronic music, his sustained guitar wailing repetitive riffs over churning synths, and often driving drum tracks.

Pinhas last played Victo in 2011 with Merzbow and Wolf Eyes, arguably the finest representations of the Japanese and American noise scenes, respectively. This year he will be joined by Merzbow again, with whom he’s released a half dozen records cementing their duo as a recognizable entity. Just this month, Pinhas released two new albums, one in collaboration with Tatsuyo Yoshida, one of Japan’s most impressive drummers, and the other with Australian noise musician Oren Ambarchi.  Ambrachi and Keiji Haino have also collaborated together in recent years, and initially Ambarchi was meant to join as their fifth for Friday’s performance. Unfortunately he couldn’t be there Friday, though he will be performing as part of a trio with Haino and Sunn 0)))’s Stephen O’Malley on Saturday night.

Pinhas’s style is very much rooted in repetition and difference.  The addition of Yoshida grounds the music with his unpredictable and propulsive playing, while Haino brings something to the table that Pinhas can only describe as unique. Though it’s improvised, the four have played together before, in other combinations and as a quartet, and as such Pinhas expects there will be a very high level of communication.

Is it still “Always Rock N’ Roll?” Pinhas laughs that to him rock is still the reference point, but of course the result of their meeting on Friday night will be unpredictable and adventurous. Pinhas doesn’t take for granted the opportunity playing with these three musicians. “All three,” he says, “are the best at what they do.”

Pinhas loves playing Victoriaville, because it creates an opportunity for musicians and audiences to come together in ways that festivals in big cities just can’t manage. “You can do things there you cannot do anywhere else. like bring three guys from Japan and a French guy.”  The four played together in Tokyo last fall while Pinhas was touring Japan, but he insists that Tokyo was different — since the rest all live there, only he was invited. But to have the chance to perform together abroad is special.

“I expect it will be one of the best nights of my life.” ■