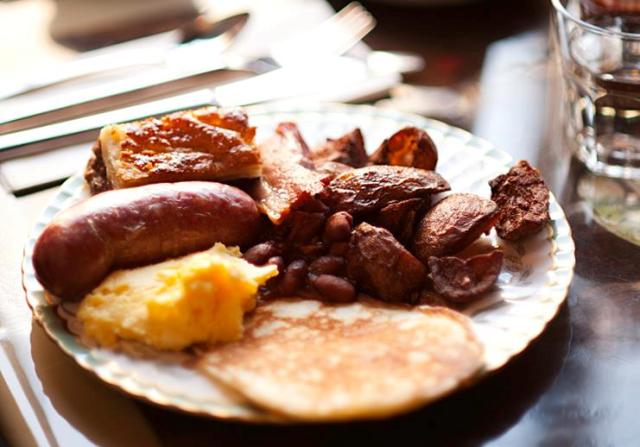 Over the last two weekends in March, Sparrow will host its annual cabane à sucre brunch, prepared by the Mile End pub’s chef Jeremiah Bullied and his staff. It’s by no means a radical reimagining of the sugar-shack feast, like the decadent offerings of Au Pied de Cochon at their perpetually sold-out, twice-as-pricey weekend brunches in St-Benoît de Mirabel. Bullied explained that the emphasis is on quality.

“Everybody really connects with the idea of the sugar shack, but you drive out to the country and it’s typically not-great food, or at least not carefully crafted food,” he explains. “We try to make it as farmy as we can, so we get free-range eggs from a farm. We pay about twice as much as anyone else, but it’s so worth it. They’re the best eggs ever. ”

Vergers McMillan provides Sparrow with not only the eggs, but fresh fruit and vegetables and organic maple syrup. The syrup flows freely in unlimited quantities throughout the brunch, and the food you’re sure to drown it in is abundant, too.

“It’s all you can eat — we just bring stuff out to the table until people give up,” Bullied says.

And while the sugar shack spread usually yields next to nothing for vegetarians, Sparrow thinks differently. Most will opt for hammy pea soup and standard tourtière, vegetarians can request lentil soup and whole grain buckwheat barley tourtière, among other meat-less alternatives.

“We go out of our way to be veggie-friendly as much as possible — in Mile End, it’s a smart thing to do.”

While all this is amazing news for hungry folk who don’t want to leave the city to experience this culinary spring tradition, it’s bittersweet for Bullied and his crew. After the final cabane à sucre brunch on March 30, Bullied’s time at Sparrow’s kitchen — which was run as a concession, and a separate business — will come to a close. Souschef Jay Taylor will take over.

“Running a kitchen as a chef while running a business is a really tough road to hoe, and after a while the personal sacrifices were too much,” Bullied explains. When asked whether he’d open his own place, as his predecessor at Sparrow did (Marc Cohen now runs Lawrence), Bullied says no, at least not for the moment. Between Revenue Quebec’s recent crackdown on restaurants, the skyrocketing price of food and the expectations of clientele in this era of “foodie” culture, it’s a tough time for fledgling restaurateurs.

“I wanna see how all this plays out before I look into a new venture,” Bullied says. “For me, there needs to be a new ‘why,’ and the ‘why’ of being at Sparrow was the esprit de corps, it was the fun of working with your friends and being in a super-fun bar.” ■