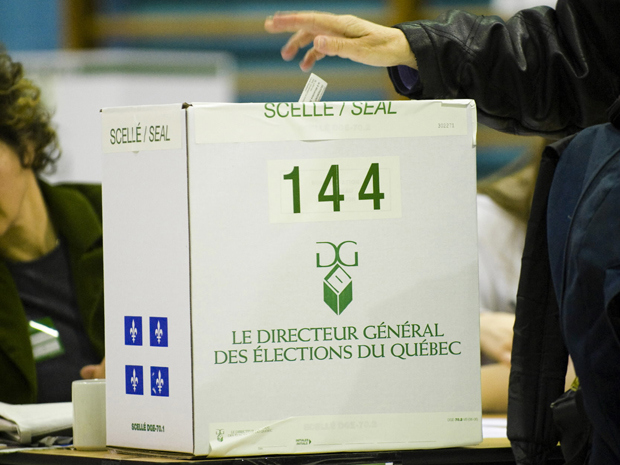 It seems strange that convicted embezzler Earl Jones will be able to cast his ballot on April 7, but McGill PhD student Sean Beatty, who has lived here longer than Jones was in jail, will not.

Jones, after all, will have no problem proving that he has been domiciled in Quebec for at least six months, since he was a guest of the state at the Ste-Anne-des-Plaines prison for four years until his release last week. Other well-known figures who will be allowed to vote include Richard Bain, accused of first-degree murder and of trying to assassinate Quebec premier-elect Pauline Marois on election night, and Luka Magnotta, who is awaiting trial on charges that he killed and dismembered student Jun Lin in May, 2012.

I don’t point to these cases as examples of the laxity of our system, but as proof of how seriously we take the right to vote.  Attempts by Ottawa to disenfranchise prisoners by limiting the vote to people serving less than two years went all the way to the Supreme Court, which ruled against the federal government in 2003.

In the 5–4 Sauvé v Canada decision, Chief Justice Beverley McLachlin, writing on behalf of the majority, argued that “at the end of the day, people should not be left guessing about why their Charter rights have been infringed. Demonstrable justification requires that the objective clearly reveal the harm that the government hopes to remedy, and that this objective remain constant throughout the justification process.”

I’m not a lawyer, but it seems to me that many of the arguments raised in Sauvé v Canada could be applied to the seemingly arbitrary criteria being used by minor Quebec election officials to suppress the voting rights of people like Beatty.

Beatty is one of thousands of Quebec residents, many of them students,  who have tried to get their names added to the electoral list before the April 7 election. Under provincial law, the right to vote is restricted to Canadian citizens 18 years or older who have been “domiciled” in Quebec for at least six months prior to the election call. It’s the “domiciled” part that is causing the problem, since simple residency is not good enough to get you on the list. You can wave as many leases and Hydro bills as you like in front of the gatekeepers of democracy, but unless they are satisfied that Quebec is your home and not just your crash pad, they can turn you down with no right of appeal.

After the issue blew up on Saturday following an alarmist story in Le Devoir suggesting (falsely) there was an “abnormally high” number of “anglophones and allophones” trying to get on the list, the province’s chief returning officer issued a communiqué specifying that proof of domesticity could include a Quebec driver’s licence, healthcare card or tax return.

That led a second wave of people who had been previously rejected to return to the revision office with the specified documents, only to find that the proof cited by the returning officer wasn’t enough if the revision officers’ spidey-senses told them the applicant might not stay here after finishing school.

Like I said, I’m not a lawyer, but that seems to me to be the definition of the arbitrary denial of a fundamental right guaranteed in the Quebec and Canadian charters.

As McLachlin wrote, “people should not be left guessing about why their Charter rights have been infringed.” In Quebec these days, it’s not just the disenfranchised who are left wondering as more and more stories are coming out that show that two people in virtually identical situations can see totally different outcomes, even in front of the same revision officers.

The process is intended to prevent people who don’t have the right to vote from fraudulently obtaining that right, a goal we can all applaud. But in the absence of clear and objective criteria for evaluating whether someone is in fact “domiciled” in Quebec, the harm of the current system far outweighs any alleged benefit.

Denying someone their basic rights cannot be taken lightly.

First, the law has to be rewritten to set out clear guidelines defining what evidence is required to establish whether a voter is domiciled in Quebec. Secondly, revision panels should not have the power to refuse anyone who meets the objective criteria. Third, decisions of the panels should be appealable to a permanent body of experts specifically trained to make such judgments.

Until those changes are made, the rights of Bain and Magnotta and Jones will continue to be better protected than the rights of Quebecers whose only crimes might be a less-than-deferential attitude to the 125 kangaroo tribunals known as boards of revisers. ■