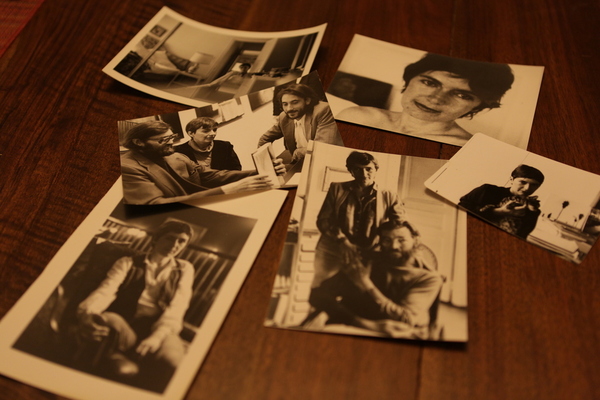 Archives used throughout the filming of Julio & Carol

If you’re not a literary buff, the name Julio Cortázar may not mean much. But by those who are familiar with his work, he has been called a “modern master of the short story,” and is known as one of the major figures of the Latin American Boom of the ‘60s and ‘70s.

In the late ‘70s, he fell in love with Carol Dunlop, an American writer, translator and photographer who lived and worked in Montreal. Dunlop served as Cortázar’s muse and the pair wrote a book together, Autonauts of the Cosmoroute, during a road trip through France. While Cortázar and his writing have staked out a secure spot in history, Dunlop has faded into the background — she’s remembered in relation to her famous husband, and for her tragic death.

Tobin Dalrymple has set out to tell her story and unearth more about Dunlop and her life in Montreal with his documentary Julio & Carol. We spoke to him last week about the film’s development and his research process.

Kayla Marie Hillier: Why did you decide to explore the relationship between Cortázar and Dunlop?
Tobin Dalrymple: It all started about 12 months ago. I had an Argentinean fiancée and we were very close regarding Cortázar. We shared a love for his books — I even called her the same name that Cortázar called his wife, which was osita, which means “little bear.” We had a really bad break-up and it was really sad. And — one of those things you do — I went and bought their book that they wrote together [Cortázar and Dunlop] and I was sitting there reading this beautiful love story while going through my break-up, with this character who had the same name as my girl, which was terrible — but also really beautiful and really inspiring.

You name it, it was going wrong in my life at the time. I just got fired, I wasn’t happy with my career decisions, I was living in my brother’s basement. Basically, I was inspired to find a way out through this love story. I started looking for who she was, this character in the book, and this really amazing love story popped up — this story of a Canadian artist that no one knew about with only a line or two about her on her Wikipedia page. She was always just mentioned in passing as his wife and nobody really knew her story. So that’s what really energized me to go out there and find the rest of her story.

KMH: What was your research process like? Was it difficult to track down information on Carol?
TD: At the start all I had was the book and in the introduction they thank a bunch of people. The book was written 30 years ago and most of the people at the time were about 60, so a lot of those people are dead now. The first big break came with her son. One of the only concrete details we had was we knew she had this son and we actually knew the year he was born in and that he was born from her first husband, François Hebert. Her son’s name is Stéphane Hebert and I figured he would be in Quebec. So I spent weeks really just calling thousands of Stéphane Heberts in Ottawa and Quebec. I called up hockey players and lawyers — it was really hard and I couldn’t find him.

There was this one night where this guy kept popping up on Google in Switzerland and I thought that it couldn’t possibly be that guy. Eventually I was tired of hitting dead ends so I opened up his LinkedIn profile and he looked exactly like his mom and he went to school in Quebec and he’s a French national citizen and he can speak Spanish — it all lined up. I knew it had to be this guy. I paid a dollar or whatever to send a message through LinkedIn and got in touch with him. He got back to me in about five minutes and said, “Yeah, that’s my mom. I’d love to tell the story.” I think that was the best day I had in a long time and it kind of broke open the case. From then on I started to plan to go to Paris and retrace this magical voyage that Dunlop took with Cortázar. I went all over, I ended up getting a lot more leads through the introduction of their book, and characters in the book they wrote together, a lot of them are still alive.

People are very, especially in Argentina and in Europe, they’re very — they care a lot about Julio Cortázar. And everybody sees this character that was his wife as this kind of mythological character, without much details or personality, just this muse for him. So they’re all very intrigued about what I’m doing. There’s been a lot of help and a lot of support from true Cortázar fans, experts, old friends. A lot of people are really passionate about this idea.

KMH: Had you dabbled in film at all before, or did that come about with the idea to find out more about Carol Dunlop?
TD: This was definitely my first film. But I’ve written fiction-form short stories and this is something I really — 12 months ago I didn’t know I’d be making films. Now I think it’s my life and it just feels great. This is the first and not the last. Actually, I can’t wait to get this thing done so I can focus on the next one.

KMH: Why do you think this story is relatively unknown in Montreal?
TD: There’s a lot of people who are really struggling to keep her memory alive but it’s a very small literary clique. There’s Marie-Claire Blais, the Governor General’s Award-winning author. She was with Carol when Carol was very young, and Carol translated Blais’s masterpiece novel — that alone could be a documentary, translating that novel. It’s a very James Joycean train of thought, 12-paragraph-long sentences, insane work. They became really close doing that, and I spoke with Blais and she remembers Carol as this light, and as a genius. You can hear the heartbreak in her voice when she remembers Carol. She’s really hoping that we republish all of Carol’s novels. Obviously Carol’s first husband and her old friends here in Montreal, they’re all very keen on seeing Carol’s novels come out again — maybe she’ll get another shot. That’s part of the larger project. I feel so close to Carol now, it’s obviously a thing I want to help out with, too. I think a film is probably a good forum to do that. ■

Julio & Carol is still in production, and is set to be released in the fall. For more information and to help fund the film, head here.

Michael Kovrig and Michael Spavor have finally been released.

Another spooky series by Mike Flanagan, a Netflix horror movie by a Montreal director, Jon Stewart’s new show and more.