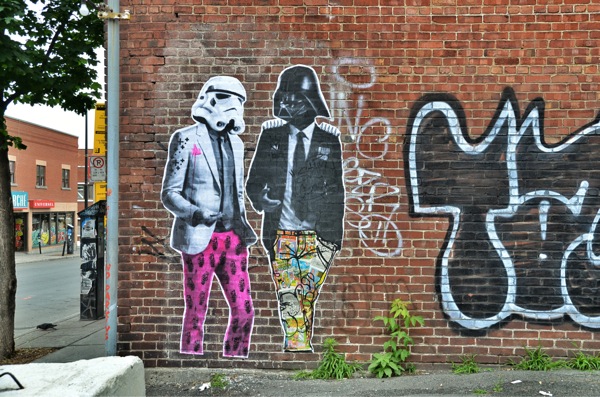 If you own functional eyeballs and leave your house, you’re probably already a fan. The enigma who goes by Stikki Peaches blasts walls with slick multi-layer paste-ups at full force alongside his tagline, “What if art ruled the world?” while remaining one of the most mysterious and beloved players in Montreal’s street art scene.

Cult MTL talked to the man behind all those masked men to find out why.

Emily Raine: How long have you been making outdoor art?
Stikki Peaches: A little over four years now.

ER: So, why the name Stikki Peaches?
SP: ‘Cause ”Genius” wasn’t available.

ER: How careful are you about protecting your anonymity?
SP: It’s crucial. Keeping my anonymity allows me to get around more, get more work done and keep things manageable. Life’s much simpler this way. Although it might seem like a lot of work being Bruce Wayne/Batman, having the right people backing you up — some decoys pretending to be me — keeps things fresh and rolling on as usual.

ER: What’s the craziest thing you’ve seen while you’re out doing paste-ups?
SP: A full-out brawl between a dozen dudes at around 3 a.m. in the streets of Montmartre in Paris as I was finishing up my TinBond piece… I peeked out of the alley to hear what all the commotion was about. All I heard was yelling and screaming in what sounded to me like Russian, bottles breaking and bodies bouncing off each other. I stepped back into the alley, finished up my work and was out of there.

ER: What’s the appeal of your central character/image, the Batman/Bond hybrid? Can we assume that this is how you look, more or less?
SP: It’s a mash-up of two characters I was drawn to as a kid. Growing up, Batman was the ultimate non-super-powered superhero, all the while being a total baller in his everyday business as Bruce Wayne. As for 007, well, what’s not to like? A special agent in a sharp looking tux who has a certain charm with the ladies? Both have the absolute coolest, technically advanced gadgets, cars and weapons around. I gotta find me an Alfred or a ”Q”!

ER: Who are some of the other artists you’re excited about right now?
SP: There are so many great artists out there right now, making game changing moves, but I’m especially excited about the artists I will be working alongside in the New Year. Stay tuned. Big things poppin’ :)

ER: How do you want people to react to your art?
SP: However they see fit. My art isn’t a secret code that needs to be cracked. It’s put out there to be enjoyed, perhaps raise a question or two, or just put a smile on your face. It references pop art and iconic figures we can all relate to one way or another. Art for the soul is probably the best way to put it.

ER: Where does the “What if art ruled the world?” slogan come from?
SP: It’s a question I asked myself in a time where things seemed complicated and unclear. I returned to art and mainly street art as a way to distance myself from certain issues that kept me from being happy. My art and passion brought me back to my happy place. It’s a way of asking: What does art do for you? Where does it take you? What do you feel? Are there answers through art? Does it rule your world as it does mine? Or are you consumed by the everyday political struggles or religious beliefs the media and society constantly bring to your attention? Art most definitely rules my world, as it does for many others, but some are just too blinded by the everyday grind and expectations of life’s routines, so we lose touch with the simpler things around us. Art has always ruled the world: you just gotta open your eyes and mind to let the goodness in. ■

Stikki Peaches launches a limited edition of line of signed and numbered Fugedabout it (Star Wars GQ) prints today at 12 p.m. via Station 16.