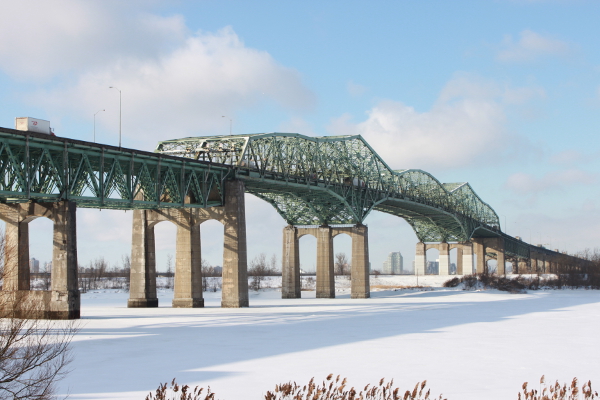 The current Champlain Bridge — not exactly long for this world. Photo via Flickr

How much will the Champlain Bridge replacement cost? Nobody knows yet, since the design is still far from being finalized, but the ballpark is anywhere from $3 billion to $5 billion.

Now that’s a big ballpark! And we all remember what happened to the costs of our other ballpark, the Olympic Stadium. So let’s assume a minimum of $5 billion, forgetting for the moment about cost overruns, kickbacks and corruption. (I know it’s not easy, but try for just a sec.)

That’s as much as 10 times more than we spent on the Olivier-Charbonneau Bridge to Laval (opened in 2011) and three to four times as much as the 13.9-km Confederation Bridge connecting Prince Edward Island to New Brunswick. It will likely be twice as expensive as the $2.46 billion, 2-km-long Port Mann Bridge between Coquitlam and Surrey, B.C.

Thankfully, the bridges mentioned above aren’t going to leave taxpayers footing the bill, because they all charge tolls, ranging from $1.80 per car on the Olivier-Charbonneau to $44.50 for the Confederation. (La Presse has a good feature today on the whole toll tollé.)

And although the federal government — which is paying for the bridge — has said all along that tolls would be put in place, both Quebec premier Pauline Marois and Montreal mayor Denis Coderre have decided to make the question a battle cry in this latest fight with Ottawa.

With all due respect, both scenarios are ridiculous. First of all, the federal government only has jurisdiction over the Champlain and Jacques-Cartier bridges; the rest are controlled by Quebec. And while you can get away with putting tolls on new structures, placing them on existing bridges would invite a mass uprising. That’s why the construction of the Olivier-Charbonneau toll bridge didn’t lead to tolls popping up all around the island, and there’s no justification for doing so just to spread the pain, as St-Hilaire suggests.

But if we don’t institute a toll on the New Champlain, we’ll be spreading $5 billion worth of pain across the country. That may sound good at first glance, but it won’t sound so good when it’s our turn to pay for federal bridges in Ontario or Manitoba.

I’m not a big advocate of user-pay services from government, especially when it comes to basic rights like health care and education. But I really don’t see a problem with requiring people who use the bridge to help pay for it. On the contrary, I think it’s essential. After all, South Shore residents riding the light-rail train (keep your fingers crossed) across the New Champlain will have bought a ticket, so why shouldn’t the people who opt to drive their cars across pay something, too?

The reason user fees in health and education are a bad idea is because they act as disincentives for the poor, causing people to postpone or cancel altogether their plans to get a degree or an annual check-up. If user fees on the New Champlain convince some people to leave their cars at home, that’s a good thing. It will reduce pollution and relieve traffic pressures in the city. But those who do decide to take the toll bridge should pay for the convenience rather than expecting other taxpayers to pick up the tab.

Did I mention it will be $5 BILLION?

How much should the tolls be? I’ll leave that to the number-crunchers, but the charge should be high enough to make people think twice about driving across the New Champlain every day but not so high that it turns the bridge into a semi-private highway for the wealthy.

And if Prime Minister Stephen Harper wants to get people like Coderre, Marois and St-Hilaire on board quickly, it might be a good idea to put aside a percentage of the toll revenues for public transit and the maintenance of municipal roads and provincial highways leading up to the bridge.

That, as the politicians like to say, is a win-win proposition, even for the New Champlain commuters who were hoping for a free ride. They will just have to settle for a faster, safer one. ■