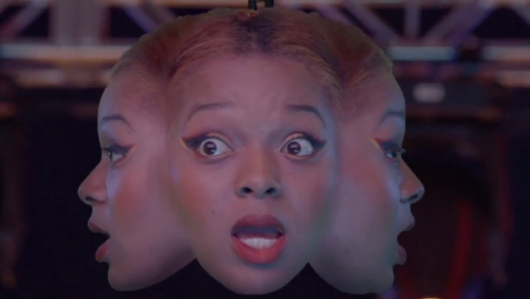 18. Unknown Mortal Orchestra, “Swim and Sleep (Like a Shark)”


Unknown Mortal Orchestra – Swim and Sleep (Like A Shark) from Blink on Vimeo.

Quasi-nazis, alien critters and the undead co-star with Brooklyn bros Team Spirit in the last chapter of their animated “Inter-Galactic Time-Travelling Dimension-Bending Saga.”

Did you know that Majical Cloudz main man Devon Welsh is Windom Earle’s son? Well it kind of shows here as the Montreal act gets dark and tortuous, abetted by a director that Consequence of Sound called a “possible sadist.”

Another local weirdo got into insects this year, but FLIST’s bug was more figurative. On the creepy scale, this grimy, pervy, stomach-churning rendering ranks high.

How could we not include a NIN video directed by David Lynch? More insects, filth and such flash that it’s unsafe viewing for epileptics.

Allentown, PA punks Pissed Jeans propose disaster on an infomercial set to illustrate this tune from their fourth album, Honeys. If only all late-night TV could be like this.

Blood, gore and ultraviolence befall Montreal’s BCASA at the hands of a masked avenger in this video for a tune off their latest record, Fuck You Shredder.

If you don’t actually drop brain cells, you’ll at least walk away feeling punch-drunk after witnessing the goofy wrestling antics of Odd Future bro Tyler, the Creator, with most if not all of his OFWGKTA crew making cameos (Earl Sweatshirt is the ref).

U.K. grime ambassador Dizzee Rascal has been off the radar for a while, especially on this side of the Atlantic, but this door-to-door bass evangelism concept will bust your guts.

While New York may never return to the boom bap sound and lyricism it popularized, Bitches Is Crazy owe something to NY’s days of yore. These kids can spit. And, as this video proves, they’re on some scumbag shit.

The NSFW video for the third single from Foals’ Holy Fire finds the British band playing a sleazy urban inn to a roomful of Russian mafia dudes while sex, childbirth and auto-erotic kicks go down in the rooms upstairs.

MTL’s own A-Trak has been part of many a killer video, on his own and with Armand Van Helden as Duck Sauce, the duo behind “Barbra Streisand.” Well here’s some more special sauce — get a load of this psychedelic barber shop shit.

Not surprisingly, that wasn’t the only wowza A-Trak video this year. This brilliant Rube Goldberg creation by Kinetic King and bit of directorial wizardry by Ryan Staake is freaky in that how the fuck is this for real? It’s not one take, but still. Award magnet.

U.K. bass face Zomboy (aka Joshua Mellody) makes the kind of music that’s dangerous in large doses, especially when you  plug it into your skin. Squeamish? Skip this one.

NYC rappeuse and beef connoisseur Azealia Banks disappointed fans this year by not releasing an album and cancelling her Osheaga set. But she did deliver this intense slice of WTF weirdness.

South African duo Die Antwoord fly their “zef” flag so high that it’s virtually impossible to top themselves on the freaky-video tip at this point. And yet they’re reliably disturbing. See space pixie/demonic skank Yolandi as she pisses, gyrates and participates in some suggested paedophelia.

If you thought Miley Cyrus had the distinction of producing the most raunchy, grotesque and hilariously awful bit of music television this year (forget “Wrecking Ball,” we’re talking MMVAs), brace yourself for this shameless/shameful creation by director Eric Wareheim (Tim and Eric), inspired by the almost equally moronic song by Major Lazer. NSFW, obviously.