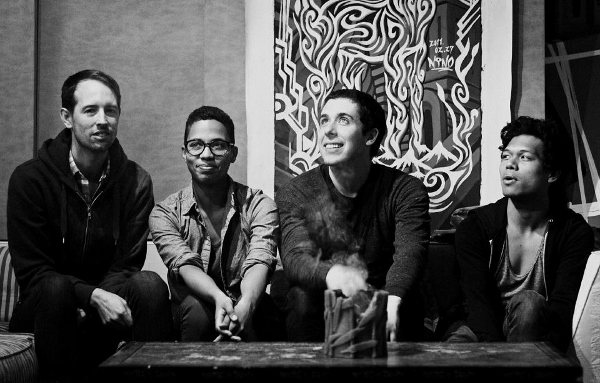 Folly and the Hunter

Although it came out earlier this year, during the spring thaw, Tragic Care is meant to be listened to right about now: when the trees are stripped bare, and the mornings are slightly frosty.

It makes sense, then, that Folly and the Hunter have been gradually gathering steam throughout 2013, as opposed to burning brightly and quickly fading. The amplified folksters will end the year in style, performing at M for Montreal this Saturday, then opening for Half Moon Run at their very sold out Metropolis gig on Dec. 7.

The local quartet’s dense, bittersweet-tinged urban folk should fit well in that environment.

“We’ve been influenced by Half Moon Run,” says banjo player Chris Fox, the group’s lone Brit. “I like the expansiveness of their sound. The different organ sounds. It’s always so full and punchy.”

Singer/guitarist Nick Vallee says their future work might even pull them more into that territory. “It’s still going to be us, but it’s going to be a lot more driving and energetic, with more drums. Laurie (Torres) is going to be playing drums more during the writing process,” he says.

While all this might suggest Folly and the Hunter are on the fast track to bigger things, Fox says that’s not exactly how they roll. “That’s the thing — we’re the gentlest hill you’ve ever seen,” he says.

I recently had the opportunity to talk Degrassi-anointed success and long-forgotten heartbreak with Vallee, Fox and multi-instrumentalists Laurie Torres and Phil Creamer:

Erik Leijon: You just came back from touring Europe. How was it?
NV: It was the first time for the band.
CF: Well, I’m from Europe.
LT: It’s amazing how crowds react differently to music. They all express themselves in different ways. In Barcelona they’re really cheerful…
CF: I’d say rowdy.
LT: In Belgium, they’re so quiet, you don’t even know if they like it until they start asking for encores. Then they can’t stop clapping.
NV: We played an acoustic show in Berlin, in a space where a couple lived. There were about 50 people there, it was packed. Really intimate.

EL: The songs on Tragic Care are meant to be very personal. How has it felt, performing these personal songs night after night?
NV: It becomes more of a memento than something you’re actually feeling, because our lives have changed so much since then. Part of the album is about a relationship I really don’t care about anymore. You know how it is: it’s the end of the world at the time when it’s happening, and then a year and a half goes by and you say to yourself, “What the heck was I thinking?” I think the emotions are real and they’ll always stay with us, but we’re in a different place than when we wrote the record.

EL: What are you writing about now?
NV: Tragic Care was more about dealing with difficult situations and realizing you have to develop out of those situations to become stronger. Now it’s more about having a good life and trying to sabotage it for the sake of chaos. It’s important to honour the dark side of life, because it’s always there, and there’s always that gradient between joy and pain.
CF: In other words, Nick is Darth Vader.
PC: He’s the Sith Lord.
NV: The next album is going to be a concept album about Star Wars: Episode Seven.

EL: One of your songs was on a teen drama (MTV’s Awkward). How does that feel?
CF: It’s been on a few. It’s been on Awkward, it’s been on this Canadian show called Cracked. It’s been on Rookie Blue.
DV: And “Vultures” was on Degrassi!
LT: That was such a great scene, too. The song was so much up-front. It’s the series finale.
CF: Someone died.
LT: It’s more about the celebration than the death.
CF: It was the reunion, it was the happy part. They were coming together for the wake, and there was a bonfire. It was bittersweet; it was perfect.
DV: That’s what people like about our music. The placement we got for “Ghost” in Rookie Blue was when the main character walked in the police station and realized her ex-boyfriend had a new love and she was sad. That’s our niche.
LT: I was really happy we were on Degrassi. The person who picks the music has such great taste; they always put the best Canadian bands. So I guess that means we’re one of the best Canadian bands. Sweet! ■

Folly and the Hunter are performing as part of M for Montreal, with Maica Mia, Syngja and Avec le Soleil Sortant de sa Bouche, at Casa del Popolo (4873 St-Laurent) on Saturday, Nov. 23, 9 p.m., $10