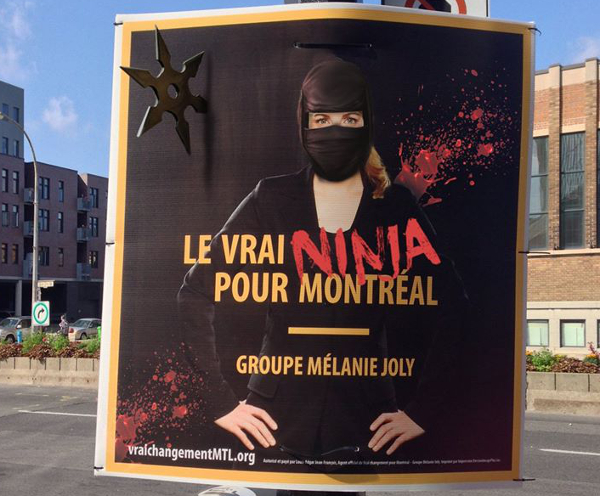 Some of you out there have been planning your Halloween costumes for weeks, if not months in the most extreme cases. Others, perhaps only upon giving this very article a quick once over, have come to realize that Halloween has arrived, and you have diddly squat prepared.

If you’re scrambling, here are a few suggestions for creative outfits you can put together quickly, in some cases using mostly household objects. They’re all Montreal-related and topical, giving you a built-in excuse should they look hastily assembled.

Mélanie Ninjoly: Based on a creative riff on her infamous all-black campaign poster, all you need for this outfit is a dark pantsuit and a ninja mask. Added authenticity if you can pack a blonde wig underneath. Who needs real change when you’ve got nunchuks?

Secret Arcade Fire concert: Be the talk of music buffs on Twitter by hosting the next secret Reflektors show…on your body. Print a picture of the band, glue it to the inside of an empty FedEx box, and then write “Formal Attire Only” on the box’s front lid. Now strap the closed box to your chest, and whenever someone passes your cursory fashion test, open the box to reveal the anticipated gig inside. Consider taping a pic of sometimes-member Owen Pallett to a limb.

George Parros: It might seem a bit insensitive right now, given the Habs’ new Greek God of pugilism is currently out with an accidental, self-inflicted concussion, but his gingerly skating self will be back on the fourth line before you know it. All you need is a Habs jersey, an Ivy League degree, a manly moustache and maybe a helmet you can debate removing pre-fight.

A “Janette”: Dressing as an 88-year-old woman is easy enough — just raid your gammy’s closet. But how do you dress like an 88-year-old relic whose opinion is inexplicably still considered relevant? Just add a placard that reads “Quebec/Je me souviens/Janette/aussi!!!” or “Quebec Laic 100%.”

A traffic cone: Inspired by cheerful webcomic Ponto, the city’s omnipresent pseudo-mascot need not be an annoyance. Instead, gather some orange and white and make a striped snuggie out of it. You’ll be warm, and able to redirect traffic just by standing still.

Michael “Bonita” Applebaum: This one might elicit some confused stares, but it’s actually quite simple. Wear a suit (consider going with a red tie), slip on some handcuffs, and stuff a pillow or crumpled newspaper under your pants in the backside area, to give the appearance of an ample derrière. Everyone will be saying, “You gotta put me on…to some questionable real estate deals.”

Other ideas that still need to be fleshed out: a video game industry tax credit, a Moment Factory moment, a burst water main, a tramway or metro extension, a Just for Laughs Gag. ■